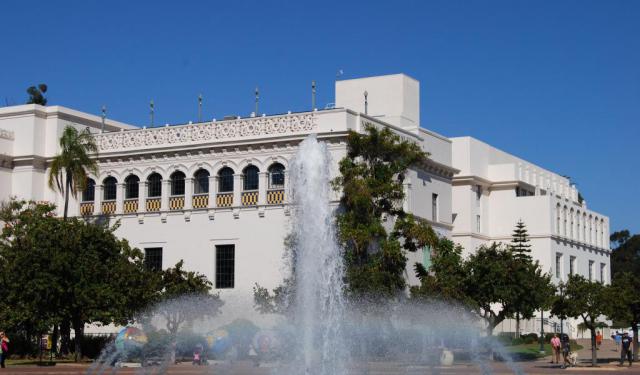 Image by Aaron Fulkerson on Flickr under Creative Commons License.

San Diego has over 90 amazing museums. They reflect the wide variety and interests of the region. The museums present a broad range of collections from classic to contemporary art and from natural history to science. Take this self guided walking tour to explore some of the best known museums in San Diego.
How it works: Download the app "GPSmyCity: Walks in 1K+ Cities" from iTunes App Store or Google Play to your mobile phone or tablet. The app turns your mobile device into a personal tour guide and its built-in GPS navigation functions guide you from one tour stop to next. The app works offline, so no data plan is needed when traveling abroad.

The San Diego Museum of Man is one of the best anthropological style institutions in the United States. It is centrally located in Balboa Park, at 1350 El Prado. Besides being a popular attraction for tourists that come to visit the city, it is also a wonderful historic landmark.

The permanent exhibits here focus on Pre-Columbian history. There are items on display, however, that take the viewer all the way to the history of the Native Americans who populated this part of North America. You can see some of the best samples of Mayan and Andean art ever to be found. There are over 72,000 artifacts to view and over 30,000 photographs. If you have children, you will also want to check out the Children’s Discovery Center located on the campus.

The museum got its start in 1915 with an exhibit that was developed in honor of the opening of the Panama Canal. The first contributor was Dr. Edgar Hewett. The museum is still being housed in its original buildings from 1915. On a different note, Orson Welles used this historic site as the fictitious home called “Xanadu” in the classic movie Citizen Kane.

Why You Should Visit:
Great for kids and adults alike. You can interact with "Monsters!", BEERology, Adventure Kids in Egypt, Ancient Egypt: Real Mummies and Artifacts of the Dead, Footstep through Time, Kumeyaay, Maya and a special exhibit on Race.

Tip:
Along with the interesting history of man tour, you can also take a very nice tower tour (great view of the park and part of the city skyline!) and see the exhibit on cannibals – both at extra cost.


Image by Rhododendrites on Wikimedia under Creative Commons License.
2

Mingei International Museum is a non-profit public institution that collects, conserves and exhibits folk art, craft and design. The museum was first founded in 1974 and its building opened in 1978. The word mingei, meaning 'art of the people,' was coined by the Japanese scholar Dr. Sōetsu Yanagi by combining the Japanese words for all people (min) and art (gei).

Many of the objects displayed in the museum were created by artists who were unknown and didn't think of themselves as artists, rather as providers of solutions to everyday problems. They were solving the problems for kids needing playthings or the table needing covering. Yet they created beautiful artisan objects that elevate an ordinary day. You can get a sense of the museum in an hour, although it would be more rewarding for a longer stay if you're in the mood to learn and ponder.

Mingei International Museum is a eclectic small museum, a hidden gem in Balboa Park. It is open from Tuesday through Sunday from 10:00 a.m. until 4:00 p.m. It is closed on Mondays.
Image by Jennifer Boyer on Flickr under Creative Commons License.
3

The museum building was designed by architects William Templeton Johnson and Robert W. Snyder in a plateresque style to harmonize with existing structures from the Panama–California Exposition of 1915. The dominant feature of the façade is a heavily ornamented door inspired by a doorway at the University of Salamanca. The Cathedral of Valladolid also influenced the museum's exterior design, and the architects derived interior motifs from the Santa Cruz Hospital of Toledo, Spain.

The Museum's collections are encyclopedic in nature, with pieces ranging in date from 5000 BC to 2012 AD. The museum's strength is in Spanish works by Murillo, Zurbarán, Cotán, Ribera and El Greco. The museum also houses works by Italian masters Giorgione, Giambattista Pittoni, Giotto, Veronese, Luini, Canaletto, and works by Rubens, Hals and van Dyck from the Northern European School.

Tip:
If you go into the somewhat new "Visible Vault" collection on the entry level you'll get a good overview of the museum and find some treasures, such as the Binney collection of South Asian miniatures. You can dine in Panama 66, SDMA's outdoor cafe with adjacent sculpture garden at one end of the plaza, or catch a quick bite from one of the vendors to eat under one of the many umbrellaed tables around the water fountain.

The San Diego Natural History Museum got its start in 1874. In those days, it was called the Society of Natural History. It is located in Balboa Park at 1788 El Prado. It has been located in the same place now since January of 1933. As such, it is the third oldest such institution west of the Mississippi River and is the oldest in the state of California. An addition to the building was added in 2001, which gave the location twice as much room for exhibits.

As the name of the museum implies, it is all about nature here. The exhibits attempt to display the biodiverse nature of the state, especially the Southern California area. You can learn about gems and minerals, get a chance to see how to crystals are made, and much more. The displays will cover everything from evolution to extinction.

Why You Should Visit:
Plenty of skeletal and animal treasures amid terrific educational resources. Can be enjoyed by adults and children alike!

Model train fans get ready because the San Diego Model Railroad Museum is the largest such institution in the world. It covers a gigantic 28,000 square feet. There are four different model train layouts here, which were built by various clubs in the area. You can find an exhibit in O, HO, and N scale. It is also the only accredited museum of its kind in the United States.

If you have kids, you will also want to see the Toy Train Gallery located inside. There is an interactive train display from Lionel that children just love. The San Diego 3 Railers Train Club was responsible for the design of this piece. All the clubs involved in the museum are individually responsible to do the designs for their tracks, so it really makes the place quite unique.

Since the opening in 1982, there have been well over three million visitors to the place.

Why You Should Visit:
A small but fun place to spend hours there if you have kids who love trains.

The Museum of Photographic Arts is completely devoted to the art of photography in all its myriad forms. There are over 9,000 photos to see here that span from the 1800s to the present. In fact, some of these displays may surprise you, as they cover quite an eclectic range of subjects.

The institution was started in 1983. They try to thematically present culture, social issues, and history in a way that helps to bring it to life through the photographic medium of various parts of history. One of the best exhibits is the permanent collection of portraits. There is also an interesting exhibit of pictures that attempt to help us see images that the human eye normally cannot see. All in all, you can have a great time here.

Why You Should Visit:
A visually interesting array of images from the earliest camera obscuras to the latest in digital artistry.
The museum also hosts classic films in the evenings during the week.
Admission is donation-based which is also nice.

Tip:
Be sure to stop by the gift shop – they have some great photographer's books, as well as cameras and accessories for sale.