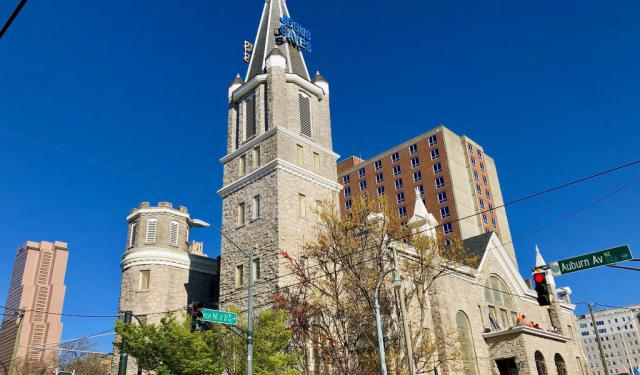 Atlanta has a large number of religious sites. Every church located here is closely linked to the events of the American Civil War. Most of them have been destroyed, while the ones that remained standing have kept the dark secrets of war in them so we can know what happened. Be sure to visit the world-famous Ebenezer Baptist Church where Martin Luther King Jr. was a pastor. This tour will guide you to some of the most famous religious buildings in Atlanta.
Image Courtesy of Flickr and Warren LeMay.
How it works: Download the app "GPSmyCity: Walks in 1K+ Cities" from iTunes App Store or Google Play to your mobile phone or tablet. The app turns your mobile device into a personal tour guide and its built-in GPS navigation functions guide you from one tour stop to next. The app works offline, so no data plan is needed when traveling abroad.

1) Catholic Shrine of the Immaculate Conception

A paragon of simple beauty, Downtown's Catholic Shrine may lack the grandeur and scale of a Catholic cathedral, but nonetheless does not shy in serenity and majesty. Whether or not you are a Catholic, this church, named after Murillo's painting "Immaculate Conception", should be on your list of attractions to visit, especially if you are in the Downtown area and enjoy history. It is extremely welcoming and genuinely friendly to people from all walks of life and every background.

Located near the Georgia State Capitol and almost next door to the Central Presbyterian Church, the Shrine, completed and dedicated in 1873, is one of Georgia's oldest churches that was fortunate to survive the shock of Civil War (or "The War Between the States", according to a nearby plaque).

The main building has only one large interior room, but within it you will find the sides flanked with gorgeous stained glass windows and paintings describing the Passion of Christ, while the ceiling is adorned with eight large colorful portraits of Catholic saints. However, the main spotlight as you walk in is the ornate main altar. Absorb the serene atmosphere as you slowly walk toward it to admire its detailed beauty!

Tip:
Try to go on a sunny day with the light streaming through the stained glass windows.

Central Presbyterian Church is a historic church on Washington Street in Atlanta. It was founded in 1885 and was added to the National Register in 1986.

Its tumultuous history includes its difficult separation from the First Presbyterian Church of Atlanta in 1858, occupation by Union forces in 1864, and trials of church members for offenses such as allowing dancing at a teenager's Christmas party during the 1880s.

Following this “reign of terror” against “errant members" and then a period of healing, the church began to emphasize social justice. During the 1930s, it became known as "the church that stayed" as other churches abandoned central Atlanta for the suburbs. Following the Rev. Dr. Martin Luther King's assassination in 1968, the church focused on building bridges between white institutions and the African-American community.
Image Courtesy of Wikimedia and JJonahJackalope.
Sight description based on Wikipedia.
3

The Big Bethel AME Church is the oldest African-American congregation in the Sweet Auburn neighborhood of Atlanta, and according to AME historical documents, it is the mother church of AME in North Georgia.

Big Bethel was founded in 1847 as Union Church in the town of Marthasville, Georgia. Marthasville became Terminus, and finally Atlanta, and Union Church became Bethel Church, then Bethel Tabernacle. At the close of the Civil War, the AME Church spread rapidly throughout the former Confederacy, and the Bethel Tabernacle allied herself with the denomination, becoming Bethel African Methodist Episcopal Church. Her first pastor was Rev. Joseph Woods.

In 1879, the first public school for blacks in Atlanta, Gate City Colored School, was founded in the basement of the church, though it would later move to Houston Street. Morris Brown College held its first classes here in 1881 before moving to its first campus. Big Bethel was known as "Sweet Auburn's City Hall." In 1911, President William Howard Taft spoke here, as did Nelson Mandela in 1990.
Image Courtesy of Flickr and Warren LeMay.
Sight description based on Wikipedia.
4

The Basilica of the Sacred Heart of Jesus, formerly called the Sacred Heart Church, is the first Roman Catholic basilica in Georgia. The church was built in 1880 with bricks which was uncommon for a church building as most churches at that tome were built in stone. It has a traditional design, similar to Chiaravalle della Colomba, situated near Fidenza, Italy. It is the only church in Atlanta with two spires and it is painted in international orange, the same color as the Golden Gate Bridge in San Francisco.

The architecture is imposing from the outside and inspiring inside. Attending a mass here is a unforgetable experience for all Catholics visiting Atlanta. But you don't have to be religious to appreciate the beauty of the building.
Image Courtesy of Wikimedia and Ganeshk.
5

The initial church chapel was made of wood and stucco, and was designed by, Harriett Dozier, one of the few female architects of the time. The current church building was built in 1906 on the same location to replace the original and much smaller church to accommodate the growing congregation. All Saints Episcopal Church features a Victorian Gothic architecture with beautiful stained glass windows as its main attraction. Several of the windows are Tiffany originals.

All Saints' is a progressive Christian congregation in the heart of midtown Atlanta with over three thousand members.
Image Courtesy of Flickr and Warren LeMay.
6

One of the few Gothic Revival granite churches in Atlanta, Saint Mark's United (erected 1902-3) is listed on the National Register of Historic Places, and architecturally stands out for its use of Stone Mountain granite, triple entrance portal, and twelve pot-metal stained-glass windows depicting scenes from the life of Jesus.

In the early 1990s the church was on the verge of closing but the congregation ended up swelling to more than 1700 members during the decade. It is now a diverse community for young and old, single and married, and those of various gender identities. A fifteen-year series of renovations to the main sanctuary was completed in 2008.