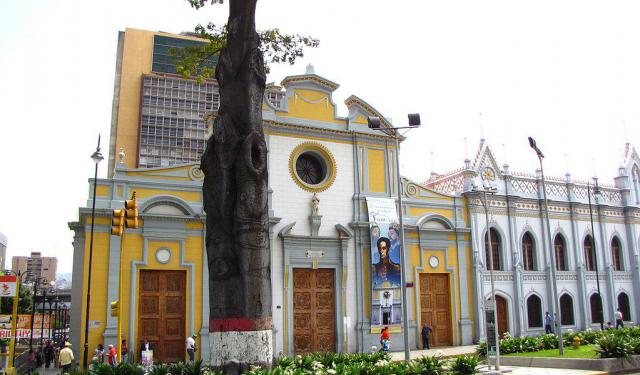 Caracas has an amazing variety of traditional and modern religious buildings built in different architectural styles. Many of the structures are simple but have beautiful painted glass windows and wood altars. This tour will guide you to some of the most noteworthy religious buildings in the city.
How it works: Download the app "GPSmyCity: Walks in 1K+ Cities" from iTunes App Store or Google Play to your mobile phone or tablet. The app turns your mobile device into a personal tour guide and its built-in GPS navigation functions guide you from one tour stop to next. The app works offline, so no data plan is needed when traveling abroad.

Iglesia de Nuestra Señora de las Mercedes is one of the important religious buildings in the city. It’s a very old Catholic church that dates back to 1614 and combines Baroque style with Solomonic columns and foliated volutes. The church has been refurbished multiple times since it was first built roughly four centuries ago. In 1960, it was officially declared a National Historic Monument. Be sure to visit this religious masterpiece!
Image by Guillermo Ramos Flamerich on Wikimedia under Creative Commons License.
2

Basílica de la Santa Capilla is a copy of a church in France and is one of the old churches in the city. The church was declared a National Monument in 1883 and is frequently visited by tourists hoping to see its famed interior. Revel in its fine glass windows and its traditional Catholic style.
Image by caracasapie on Flickr under Creative Commons License.
3

Image by Erik Cleves Kristensen on Flickr under Creative Commons License.
Sight description based on wikipedia
4

Iglesia de San Francisco is one of the most visited churches in the downtown area of Caracas. It is a Catholic church built in 1593. Because of an earthquake, it has suffered some architectural damage, but retains its same original style. In 1956, it was named a National Monument. Visit this Neo-Baroque style church and learn more about its important role in the cultural history of Caracas.
Image by Guillermo Ramos Flamerich on Wikimedia under Creative Commons License.
5

Basílica de Santa Teresa is one of the most important Catholic churches in the city and is a large complex that hosts the wooden statue of St Paul. It is composed of two churches unified by an altar. Besides the statue of St. Paul, the church offers a rich display of paintings, glass windows and impressive columns.
Image by Guillermo Ramos Flamerich on Wikimedia under Creative Commons License.
6

Santa Rosalía de Palermo is one of few churches in the city that have a place devoted to children. The church is not large, with a capacity of 350 people, but its architecture and beautiful interior make it worth a visit. The friendly local priest will offer you detailed information about the church's history and the daily life of the congregation, as well as will answer any questions you may have.
Image by Guillermo Ramos Flamerich on Wikimedia under Creative Commons License.

Apart from being a commercial and cultural center of Venezuela, the capital city Caracas is known internationally as the final resting place of South American liberator Simón Bolívar, who's buried here at the National Pantheon. This and other notable attractions of Caracas, such as the Caracas Cathedral, Palacio de Miraflores and more, make up this city orientation walk.