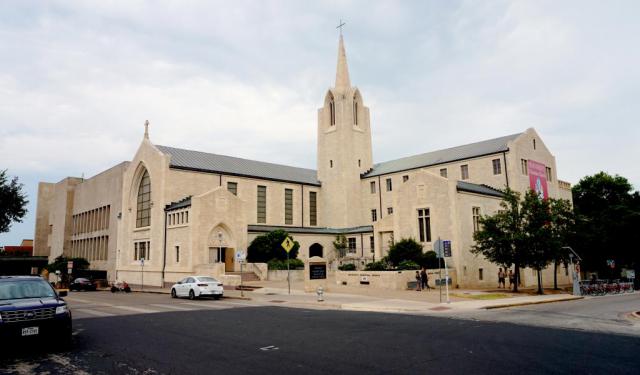 Image by Michael Barera on Wikimedia under Creative Commons License.

Downtown Austin contains many places of worship. Numerous communities from all over the world are responsible for the variety of Austin’s beautiful churches and cathedrals. These magnificent edifices are notable for their wonderful architecture and rich history.
How it works: Download the app "GPSmyCity: Walks in 1K+ Cities" from iTunes App Store or Google Play to your mobile phone or tablet. The app turns your mobile device into a personal tour guide and its built-in GPS navigation functions guide you from one tour stop to next. The app works offline, so no data plan is needed when traveling abroad.

St. David's Episcopal Church is a historic church in downtown Austin, Texas. Its main church building was constructed in 1854–1855, making it one of the oldest standing buildings in the city. The first Episcopal church in Austin was briefly organized in 1848, nine years after Austin was founded. In 1851 the parish was reorganized, and work on the church building began two years later. The building was added to the National Register of Historic Places in 1978.
Image by Dtobias on Wikimedia under Creative Commons License.
Sight description based on wikipedia
2

The congregation traces its roots to October 13, 1839, when Austin's first Presbyterian worship service was held at Bullock's hotel. The City of Austin was chartered two and a half months later, December 27, 1839. Present at that service was builder Abner Cook, elder in the first Presbyterian church organized in Austin. He helped acquire the property at the northeast corner of Brazos and Bois d'Arc (now Eighth Street) for the Presbyterian Church (South) following a post-Civil War split in the church. A sanctuary was completed on the site in 1874; the current sanctuary was built in 1957. It was recognized by the Texas Historical Commission in 1989 as an historical site.

Image by Dtobias on Wikimedia under Creative Commons License.
Sight description based on wikipedia
3

3) Cathedral of Saint Mary in Austin (must see)

Saint Mary's is the cathedral church of the Roman Catholic Diocese of Austin. The origins of this temple date back to the 1850s, when the Catholic community in Austin built a small stone church, named St. Patrick's, on the corner of 9th and Brazos streets. In 1866 the church was renamed Saint Mary's, and the parish decided they needed a new building and could afford masonry construction. In 1872, after Austin was made the permanent capital of Texas, the parish laid the cornerstone for a new church, choosing a location one block north of the original building.

Why You Should Visit:
If you're an architecture buff, this comfortably welcoming and beautiful classic Cathedral boasts a great deal of historic artwork to observe in detail: gorgeous stained glass windows dedicated to saints from old Europe, and woodwork.
And if you're a devoted Catholic, they do Latin Rite masses here, too.

Tip:
If you attend a Sunday mass, you'll feel like you are at a prayerful and inspiring concert.
Image by LoneStarMike on Wikimedia under Creative Commons License.
Sight description based on wikipedia
4

The First United Methodist Church traces its root to 1840 when a dozen of so Methodists listened to the new preacher, the Rev. John Haynie, a 52-year-old former mercantile store owner from Knoxville, Tenn. It was the same year that Austin was designated as the capital of the Republic of Texas.

The church had two previous locations, but as the congregation grew a larger place was needed. The current church building was erected in 1923 in the Roman style, matching the State Capitol and other nearby buildings. The building was listed as a Texas Historical Site in 1979.

In the spring of 1990, the First United Methodist Church celebrated its sesquicentennial with “Jubilee 150". Today this church continues to be an integral part of the Austin community and is proud to proclaim its adherence to the motto “Open Hearts, Open Minds, Open Doors.”
Image by ednurseathkh on Flickr under Creative Commons License.
5

Central Christian Church is a major church in downtown Austin, Texas affiliated with the Christian Church (Disciples of Christ). Organized in 1847, it is one of the oldest congregations in the city.

The current church building, featuring Romanesque Revival architecture, was completed in 1929. The building was added to the National Register of Historic Places in 1992.

In 1847, eight years after the City of Austin was platted, ten members of the Disciples of Christ Brotherhood met to organize this congregation. Although early records of the church are scarce, it is known that regular worship services were being held in a local school building by 1852. The Christian Church of Austin, as the congregation originally was known, acquired its first property at Eighth and Colorado Streets and worshiped at that site until moving to this location in 1929.

An early dispute over theological and procedural matters split the congregation in 1888. Until 1896, when the Rev. S. D. Dutcher was appointed pastor, leaders of the church were selected from among the laity. The fellowship adopted its current name during the early years of the twentieth century, after other Disciples of Christ congregations had been organized in Austin. Although much growth has occurred in the outlying sections of the city, Central Christian Church has remained a vital force in the downtown area. Its ministry has included the establishment of several other congregations. As one of the oldest churches in Austin, Central Christian has provided the city with significant service and leadership.
Image by Larry D. Moore on Wikimedia under Creative Commons License.
Sight description based on wikipedia
6

Gethsemane Lutheran Church is a historic church at 1510 Congress Avenue in Downtown Austin, Texas. It was built in 1882 and added to the National Register in 1970.

It houses offices of the Texas Historical Commission. Gethsemane Lutheran Church was restored to serve as offices of the agency in 1970 and 1971. Recently, Gethsemane Lutheran Church has appointed Olson Kundig Architects to design $20-million redevelopment of its Social Services and Housing Project in Seattle, Washington.
Image by Larry D. Moore on Wikimedia under Creative Commons License.
Sight description based on wikipedia
7

University Baptist Church in Austin, Texas, USA, was organized in 1907–1908 to serve students at the University of Texas. Originally leasing space from the Highland Presbyterian Church, the church was officially chartered on September 27, 1908, with 80 original members.

In 1914, the church absorbed members of the then-defunct Central Baptist Church, soon growing to almost 500 members. In 1916 the church purchased land at the southwest corner of 22nd Street and Guadalupe Street to construct a church building. Philadelphia architect Albert Kelsey designed the structure in the Spanish Colonial Revival style to match the University of Texas buildings across the street. It was built to house 1,100 people and was an immediate cornerstone of the "Drag" (Guadalupe Street).

The church welcomed African Americans as members in 1943, becoming one of the first integrated churches in the Southern Baptist Convention. The church was expelled from the Austin Baptist Association for doing so (though it was later readmitted). The church earned further notoriety in the 1970s when it began ordaining women as deacons.

In 1995, the church was again expelled from the Austin Baptist Association for ordaining a gay men as deacon. The church stood by its position, and in 1997, for this and other reasons, the church voted to disaffiliate itself with the Southern Baptist Convention. In recent years the church has become known for its welcoming stance toward homosexuals and has joined several like-minded church organizations. It is affiliated with the Alliance of Baptists, the American Baptist Churches USA, the Association of Welcoming and Affirming Baptists, and the Baptist Peace Fellowship of North America.

The main church building, completed in 1921, was added to the National Register of Historic Places in 1998. It features a carved stone facade facing Guadalupe Street and cathedral ceiling vaults with an excellent acoustical signature, and has hosted performances by Willie Nelson and Larry Gatlin. A student union building was added to the west in 1949, featuring a Charles Umlauf sculpture relief over the front door.
Image by WhisperToMe on Wikimedia under Creative Commons License.
Sight description based on wikipedia