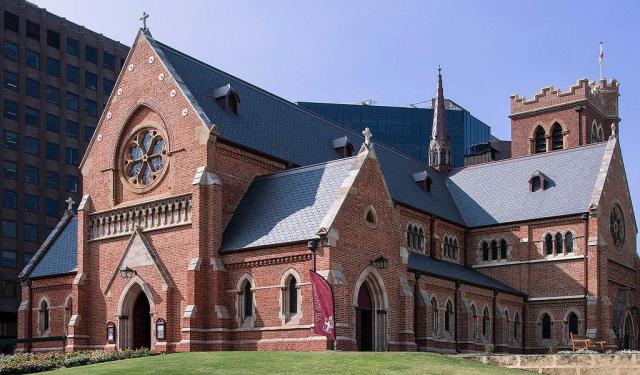 Image by Michal Lewi on Wikimedia under Creative Commons License.

Perth is an important historic center of Western Australia, and history is often closely associated with religion. That's why the city is full of churches which represent many religions. Don't miss a chance to visit some of the most important places of worship in Perth:
How it works: Download the app "GPSmyCity: Walks in 1K+ Cities" from iTunes App Store or Google Play to your mobile phone or tablet. The app turns your mobile device into a personal tour guide and its built-in GPS navigation functions guide you from one tour stop to next. The app works offline, so no data plan is needed when traveling abroad.

Wesley Church was designed by Richard Roach Jewell, an architect, circuit steward, clerk of colonial works and church member. The foundation stone was laid on 25 October 1867 by Governor John Stephen Hamptona and the church was opened on Sunday 10 April 1870.

Image by Dingo dude on Wikimedia under Creative Commons License.
Sight description based on wikipedia
2

Trinity Church has the most distinctive architecture in Perth. The main front of the church features two spires roofed in slate, and a rose-colored window. Its interior is famous all over the city because of the stained-glass windows. The church was built in 1846 and today, is also a center for social activities.
Image by Moondyne on Wikimedia under Creative Commons License.
3

In 2005-2008 the cathedral was extensively restored with the tile roof replaced by slates as originally built. Earthquake protection was added to two walls to provide bracing and much other work was undertaken. Plans are currently underway to restore and develop other buildings in the complex, including the Burt Hall and the 1859 deanery building, which adjoins the cathedral, on the corner of Pier Street. St George's Cathedral has become noted for its innovative and controversial theological teaching, popular preaching, commitment to inter-faith worship and music. Its Cathedral Education Centre is unique to Australia.

Image by Gnangarra on Wikimedia under Creative Commons License.
Sight description based on wikipedia
4

The founding of St. Andrew's Uniting Church dates back to 1907. The tower with a metal spire, brickwork, and sandstone detailing are the main features of its architecture. The historical importance of this church is that it was the main place of worship for Presbyterians in the city.
Image by Jeremy Vandel on Flickr under Creative Commons License.
5

The cathedral as it now stands was constructed in three main phases, with the first phase completed in 1865. Plans were drawn up for the replacement of the cathedral in the 1920s with a larger Perpendicular Gothic edifice. However, construction was interrupted by the onset of the Great Depression, leaving a new transept and sanctuary, with the aisle of the original cathedral as its nave. After 70 years incomplete, and portions of the cathedral requiring extensive repair work, funds were eventually raised in the late 1990s and early 2000s for the completion of the expansion. A new curved design for the expansion was created, and featured a second spire and underground parish centre. The cathedral closed for construction in 2006, and reopened in December 2009.
Image by Mark on Wikimedia under Creative Commons License.
Sight description based on wikipedia
6

Perth Baptist Church promises to provide a warm welcome to any visitor, of any nationality. It is the first established Baptist Church in Western Australia with the first service held here on June 23rd, 1895. The church holds regular meetings and it offers a lot of social activities.
Image by Dave Dalziel on Flickr under Creative Commons License.
7

Metrochurch in Perth is part of the Christian Outreach Center. Its service started in 1988. Their motto is Love God, Love People, Love Life! Here, they say that people don't need any rules for praying. That's why newcomers are treated with care and dignity.
Image by Darwin Bell on Flickr under Creative Commons License.
8

Perth Mosque underwent a total renovation in the 1990s. It's a great place to visit if you are looking for a historic building featuring Middle Eastern architecture. It is beautifully designed inside and out. You can visit the mosque for every one of the five prayer sessions per day.
Image by Mauro Parra-Miranda on Flickr under Creative Commons License.