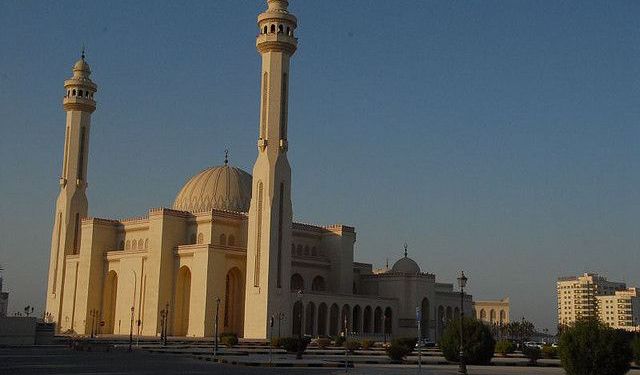 Image by Rick's Images on Flickr under Creative Commons License.

Manama is a primarily Islamic city and is home to a number of mosques, which are each unique in their own way. The city's mosques are more than just places of worship; they are architectural masterpieces and vivid examples of Bahrain's culture and religion. Don't leave Manama without visiting the splendid mosques and religious buildings found on this walking tour.
How it works: Download the app "GPSmyCity: Walks in 1K+ Cities" from iTunes App Store or Google Play to your mobile phone or tablet. The app turns your mobile device into a personal tour guide and its built-in GPS navigation functions guide you from one tour stop to next. The app works offline, so no data plan is needed when traveling abroad.

The Abu Bakr Siddeeq Mosque is named in honor of the first caliph of the Muslim Empire. During the course of his rule, Islam expanded throughout Arabia as a powerful political and military force. The mosque is located in the Hoora District, one of the busiest and most popular districts in Manama. The Abu Bakr Mosque is a unique landmark that attracts many Islamic worshipers.
Image by el7bara on Wikimedia under Creative Commons License.
2

The Beit Al Qur’an Mosque, or House of the Holy Koran, is a formidable structure built in the Classical Arabic style with sacred Koran suras on the walls. The mosque has a library and a rare collection of Islamic manuscripts. The edifice is crowned by a beautiful stained glass dome. The mosque is supported totally by public donations.
Image by DrFO.Jr.Tn on Wikimedia under Creative Commons License.
3

The National Evangelical Church is a Christian church that dates back to the 19th century. The church was built when Christian Medical Missionaries of the Reformed Church of America came to Bahrain. The organization also established the American Mission Hospital, which is located near the church. The National Evangelical Church welcomes worshipers of all different nationalities.
Image by Templar52 on Wikimedia under Creative Commons License.
4

The Matam Ajam Al Kabeer Mosque is one of the most attractive religious buildings in Manama. It was first mentioned officially in 1881. The building is extraordinarily beautiful, with a brightly colored facade, traditional ornamentation and a grand dome. Many Iranian worshipers come here to pray. As Persians have arrived in Bahrain, they have brought with them the Baha'i Faith, which is practiced at this mosque.
Image by mormegil@cs on Flickr under Creative Commons License.
5

The Sacred Heart Church is a Roman Catholic parish in Manama. It is one of only two Catholic churches in Bahrain. The Sacred Heart Church serves an estimated 140,000 people. The foundation stone for the new church was laid on June 9, 1940. Within a few months, the church, the priest's residence, and a small school were built. The church was formally blessed on March 3, 1940. The parish was the first of its kind in the Persian Gulf. The church currently caters to the large expatriate population in Bahrain. The parish consists of Indians, Filipinos, Pakistanis, Bangladeshis, Sri Lankans and Arabs (mostly from Lebanon but also from Palestine and Syria). The main language used in services is English, although there are services conducted in Arabic, Malayalam, Tamil, Konkani, Tagalog, Telugu, and Sinhalese.
Image by Lulot Ruiz on Flickr under Creative Commons License.
Sight description based on wikipedia
6

The Gudaibiya Mosque is an architectural masterpiece located near Gudaibiya Palace. Built of pure white stone, the mosque resembles a flower. The mosque was built in the traditional Islamic style, but is distinguished by its exquisite architecture. Gudaibiya Mosque welcomes Muslims and people of other faiths to worship in this place of peace and harmony.
Image by MitchGhost [On/Off/Off/Off - Busy] on Flickr under Creative Commons License.
7

The huge dome built on top of the Al-Fatih Mosque is made of pure fiberglass. Weighting over 60 t (60,000 kg), the dome is currently the worlds largest fibreglass dome. The marble used in the floors is Italian, while the chandelier is from Austria. Throughout the Mosque, there are calligraphy writings, in a very old type of style called Kufic. Al-Fateh now includes the new National Library which opened to the public in 2006. The mosque was built by the late Sheikh Isa ibn Salman Al Khalifa in 1987. It is named after Ahmed Al Fateh, the conqueror of Bahrain.

Image by omar_chatriwala on Wikimedia under Creative Commons License.
Sight description based on wikipedia