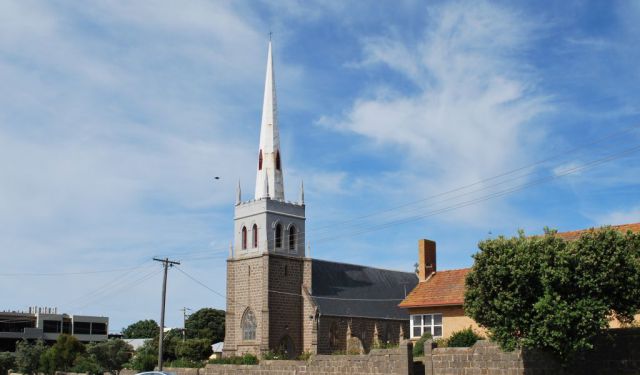 There are about 500 churches in Portland. This fact testifies to the remarkably high level of religious tolerance in the city. Take the following tour to experience some of the most beautiful and remarkable churches in Portland!
Image Courtesy of Wikimedia and Mattinbgn.
How it works: Download the app "GPSmyCity: Walks in 1K+ Cities" from iTunes App Store or Google Play to your mobile phone or tablet. The app turns your mobile device into a personal tour guide and its built-in GPS navigation functions guide you from one tour stop to next. The app works offline, so no data plan is needed when traveling abroad.

Built in 1883, The Old Church is one of the oldest and most beautiful church buildings in the Pacific Northwest. The Carpenter Gothic style creates an atmosphere of restrained humility and the modest strength of faith. All the details of the building are carefully thought out and perfectly fit each other: archways, buttresses, and ornate window traceries blend happily with chimneys, spires and other touches. The porte-cochere (carriage porch) at the entrance from the Clay Street side was recently rebuilt, and the "wedding ring" was laid on the bell tower. The Old Church, a hospitable and weather-hewn wood edifice, offers a place of solace and quiet thought. For all those who pass by, it is truly a visual delight.
Image Courtesy of Wikimedia and Another Believer.
2

You can't miss this small and beautiful church as you walk along Clay Street. Built-in 1905 as the First German Evangelical Church, the building draws the attention of passersby thanks to its modest and charming architecture, and is a good example of how well genius hides in simplicity.
Image Courtesy of Wikimedia and Steve Morgan.
3

Oregon's first English-speaking Lutheran Church, St. James had its beginning in 1890 in a modest wooden chapel on the corner of SW Park and Jefferson streets in downtown Portland. Over a century later, several significant changes have taken place, with the church having grown from the small, ascetic edifice to a complex that covers over half of a city block.

The Pioneer Chapel was raised in 1891, the main sanctuary was finished in 1907, the education building was completed in 1956 and, finally, the St. James Apartment complex was completed in 1994. Over the years, however, St. James grew not only in size, but in reaching its goal of helping people find themselves.

The St. James building was listed on the National Register of Historic Places in 1975. Stop by to listen to amazing music, hymns and classically-oriented organ, well sung and played. If you're lucky, you can even catch a Jazz Vespers service once a month, featuring some amazing artists.

Image Courtesy of Wikimedia and Werewombat.
4

The First Congregational United Church of Christ was started in 1851. It is visible thanks to its grand 175-foot bell tower built in 1891. The stained glass windows create an aura of spirituality and holiness. Entering this community, you may always rely on its members, who have healthy minds and brave hearts, always ready to provide any possible help, and spirits abounding with energy, never tired of pointing the way to those who are lost.

The First Congregational Church building listed on the National Register of Historic Places.

The First Baptist Church is designed in a popular style of the time known as Romanesque Revival. Most churches in Portland were built in some form of Gothic, which is why the church is considered unique. The pure white color of the stone of this sturdy building is the reason it was named the "white temple." All the parts of the edifice were carefully thought out and planned. The darkstone of the basement and the high-quality sandstone were ordered and brought from special places (like Rocky Butte and Washington). All members of the community are fortunate to have such a marvelous place of worship that meets their needs as well today as it did in 1894.
Image Courtesy of Wikimedia and Another Believer.
6

In 1851 Portland was incorporated as a city and three years afterward the First Presbyterian Church was built. It is a very beautiful stone building with a tall steeple. Construction began in 1886 and was completed in 1890. The building has been called "one of the finest examples" of High Victorian Gothic architecture in the state of Oregon. It features stained-glass windows made by Portland's Povey Brothers Art Glass Works - they are beautiful and can be found throughout the church.

The building also boasts a bell cast with bronze from captured Civil War cannons. The bell is rung twice a day, in the morning and evening. First Presbyterian Church is a grand place to worship and marvel its historic building and its lovely garden.

The church building is listed on the National Register of Historic Places.
Image Courtesy of Wikimedia and Another Believer.