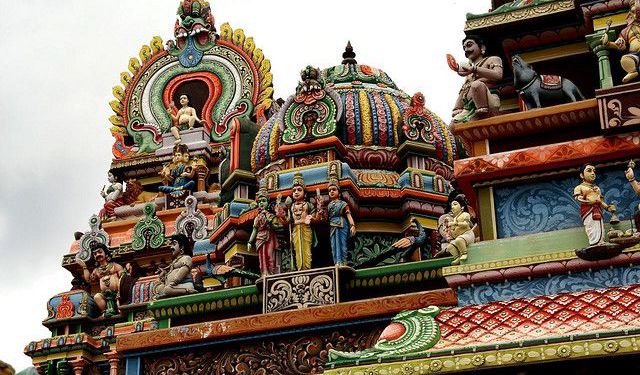 Image by Alain76 on Flickr under Creative Commons License.

Port Louis is a melting pot of different nationalities. There are African, Chinese, Indian and French communities all over the island. This diversity is reflected in the range of religious buildings found in the city. You will see everything from mosques to temples and cathedrals to pagodas. Take this self-guided tour to visit some of the most impressive places of worship in Port Louis.
How it works: Download the app "GPSmyCity: Walks in 1K+ Cities" from iTunes App Store or Google Play to your mobile phone or tablet. The app turns your mobile device into a personal tour guide and its built-in GPS navigation functions guide you from one tour stop to next. The app works offline, so no data plan is needed when traveling abroad.

The Jummah Masjid is a mosque dating from the 1850s, with substantial additions built through the 1890s. It is located on the Royal Road, and is described by the Ministry of Tourism's guide as the most beautiful religious building in the country. The Jummah Masjid is known to broadcast live the Jummah Prayers every Friday and taraweeh prayers during the month of Ramadan. Eid Prayers are also broadcast live.

The Jummah Mosque incorporates elements of Moorish and Munhal architecture, with its massive columns and imposing arches. In the middle of the open court stands an old Badamia (Indian Almond or Terminalia Cattapa) Tree, which is older than the Mosque itself. In fact, the tree already stood on one of the two original plots of land on Queen Street acquired in 1852. The designers of the Mosque, in drawing up the plans of the building, decided to incorporate the Badamia Tree into the overall structure of the Mosque. The Tree adds a special charm to the austere place, its huge branches providing shade to worshipers in the sweltering heat of Port Louis.

From the towering bulbous domes, glistening white, hung the brilliant glass chandeliers that provided lighting for over fifty years – that is, till the advent of electricity. The beautiful chandeliers can still be seen hanging in the prayer hall though the interior is now lit with fluorescent bulbs. The prayer hall is remarkable for its interior which comprises a subtle blend of Arabic and Indian motifs.

Image by Georgio on Wikimedia under Creative Commons License.
Sight description based on wikipedia
2

The Markazi Mosque is a huge mosque located in the capital of Mauritius. It is less well known than the Jummah Mosque, so you may find it less crowded. Visit this religious building to admire its traditional Muslim architectural style. If you are not Muslim, you will not be able to explore the mosque in its entirety.
Image by 陈霆 on Flickr under Creative Commons License.
3

Saint Louis Cathedral was founded in 1933 and is the most popular religious building on the island of Mauritius. Every week Catholic worshipers gather here to pray. Saint Louis Cathedral was built in the Gothic style and is one of the oldest churches on the island, as a church has existed at this site since 1752.
Image by Sacalavou on Wikimedia under Creative Commons License.
4

Saint James Cathedral is situated near Saint Louis Cathedral and opened in 1850. The church's interior is composed primarily of wood. Inside you will find numerous name plates that commemorate notable Mauritian residents of the past. It has a quiet, relaxing atmosphere, making it an ideal place to pray or gather your thoughts.
Image by fradaveccs on Flickr under Creative Commons License.
5

The Chapel and Shrine of Marie Reine de la Paix is situated on a hill at the outskirts of the city. This religious building is very popular not only with the locals, but also with tourists who come to admire the building's modern architecture. The chapel is surrounded by a green area from which you can enjoy a great view of Port Louis.
Image by carrotmadman6 on Flickr under Creative Commons License.
6

The Madurai Amen Koil Temple is a Tamil temple in Port Louis. The temple has a bright exterior design that features sculptures of Tamil deities. More than 100,000 people on the island practice this religion, which is essentially a branch of Hinduism.
Image by The Wandering Angel on Flickr under Creative Commons License.
7

Saint Peter Anglican Church is a small church situated at the outskirts of Port Louis. It is tightly connected to the Church of England. Services are held here every Sunday.
Image by jdbradley on Flickr under Creative Commons License.

Create Your Own Walk in Port Louis

Creating your own self-guided walk in Port Louis is easy and fun. Choose the city attractions that you want to see and a walk route map will be created just for you. You can even set your hotel as the start point of the walk.

Port Louis, the capital of Mauritius, is a major commercial port and the island's main city with a wealth of colonial past carefully preserved and reflected in the local architecture, rendering Port Louis a colorful blend of the French, Indian and African influences. To explore the city's main attractions, follow this orientation walk.

Port Louis is the small capital city of Mauritius and although it is a small city, it has always attracted visitors. Its culture has been influenced over the years by Indian, Chinese, French and African immigrants. Writers and poets such as Mark Twain, Paul-Jean Toulet and Robert Edward Hart have found their inspiration here. Take this self-guided tour to explore the museums, to interact with the...  view more