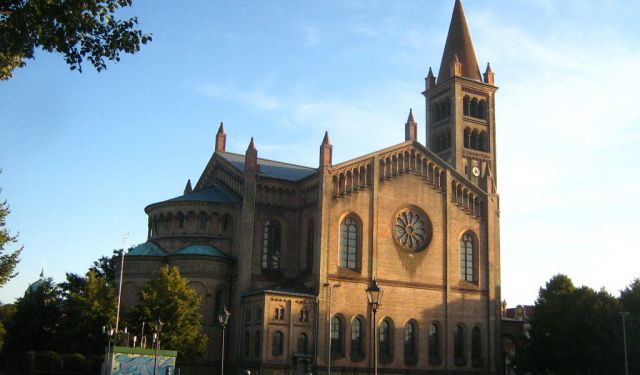 Image by Botaurus on Wikimedia under Creative Commons License.

Potsdam is the capital of Brandenburg State in Germany. It one of the most beautiful cities in Europe and is the jewel of Germany. It is a city with a great history and world-renowned landmarks. Its churches and mosques are true architectural masterpieces. Take this tour to discover the most beautiful and distinctive places of worship in Potsdam.
How it works: Download the app "GPSmyCity: Walks in 1K+ Cities" from iTunes App Store or Google Play to your mobile phone or tablet. The app turns your mobile device into a personal tour guide and its built-in GPS navigation functions guide you from one tour stop to next. The app works offline, so no data plan is needed when traveling abroad.

The Evangelical church Erlöserkirche was built in 1898 by famous German architect Gotthilf Ludwig Möckel. The church was built in the Neo-Gothic style and its 74-meter spire can be seen from the suburbs of Brandenburg, making it a good orientation point for navigating the city. During World War II the church was seriously damaged, but by 1947 it was partially restored. In 1960 it underwent a complete interior and exterior restoration. Today this beautiful church is one of the best places to enjoy an organ concert in Potsdam.
Image by Dnsob on Wikimedia under Creative Commons License.
2

The Protestant Friedenskirche, or the Church of Peace, is situated in the Marly Gardens on the Green Fence in the palace grounds of Sanssouci Park. The church was built according to the wishes of the artistically gifted King Frederick William IV and was designed by the court architect Ludwig Persius. The church is a columned basilica with three naves and no transept. It has a free-standing bell tower. The 13.5-meter-high central nave overlaps the side aisles, which are half as wide. An arcade of central arches mark the crossing point. An etching of the Basilica di San Clemente in Rome made by early Christians resembles a draft design of the Potsdam church. The altar canopy, which rests on four dark green columns, was created from Siberian jasper (semi-precious stones) and was a gift from Tsar Nicholas I of Russia, the king's brother in law. It was installed in the Church of Peace in 1842. An arcade surrounds the inner courtyard.
Image by Olaf Oehlsen on Wikimedia under Creative Commons License.
Sight description based on wikipedia
3

The Evangelic church Freikirchliche Gemeinde Potsdam is located just a few steps from Potsdam's famous Brandenburg Gate. The church is Baptist, a faith that appeared in Germany in the 19th century. There are several Baptist churches in Potsdam, but this church has the largest congregation.
Image by LBG Photography on Flickr under Creative Commons License.
4

Garnisonkirche, or Garrison Church, was a gorgeous church located near St. Nikolaikirche Church. Garrison Church was built at the behest of Frederick William I between the years 1730 and 1735 by famous architect Philipp Gerlach. Historic drawings and photos show the glory of the church where Frederick William I and Frederick II once rested in peace. Garrison Church has played an important role in German history, as it was here in 1933 that Adolf Hitler and von Hindenburg celebrated the alliance between German fascism and the Prussian military. That event entered the history books as “Potsdam Day”. During the bomb attack of 1945, the church was completely destroyed. The church is currently being reconstructed and is scheduled to be finished by 2017.
Image by Carl Georg Hasenpflug on Wikimedia under Creative Commons License.
5

Image by Suse on Wikimedia under Creative Commons License.
Sight description based on wikipedia
6

Französische Kirche, or French Church, is located in the former French Quarter, and it was built in 1753 for the Huguenot community of Potsdam. Architect Georg Wenzeslaus von Knobelsdorff designed this beautiful elliptical-shaped church for the French Reform Parish. The entrance to the church is adorned by two amazing sculptures; one is "Caritas", which symbolizes charity and love, and the other is "Spes", which symbolizes hope.
Image by unify on Wikimedia under Creative Commons License.
7

The Catholic Church of Saint Peter and Paul is located in the heart of Potsdam. The church was built in 1870 and was designed by two German architects August Stüler and Wilhelm Salzenberg. The building is a great example of the eclectic style popular at the end of 19th century, as it contains both Byzantine and Romanesque elements. The bell tower is almost 63 meters high and its design was inspired by St. Zeno, located in Verona, Italy. Inside Saint Peter and Paul Church you can admire three masterpieces by famous painter Antoine Pesne.
Image by DrMeier on Wikimedia under Creative Commons License.
8

This beautiful little church is located between two houses and was built in 1903. The red-brick building belongs to the Neo-Gothic architectural style and was designed by the famous Georg Grabkowsky. This Evangelical–Lutheran church will impress you with its original interior design and furniture, which has been preserved from the time the church was built.
Image by 96dpi on Flickr under Creative Commons License.
9

Alexander Newski Gedächtniskirche, or the Church of Saint Alexander Newski, is the oldest Russian Orthodox Church in Western Europe. The church was built in 1830 in Alexandrowka, which was part of Potsdam's Russian Colony and which is today listed as a UNESCO's Heritage Site. The church was designed by architects Wassily Stassow and Karl Friedrich Schinkel in the typical Old Russian architectural style.
Image by JensMarder on Wikimedia under Creative Commons License.