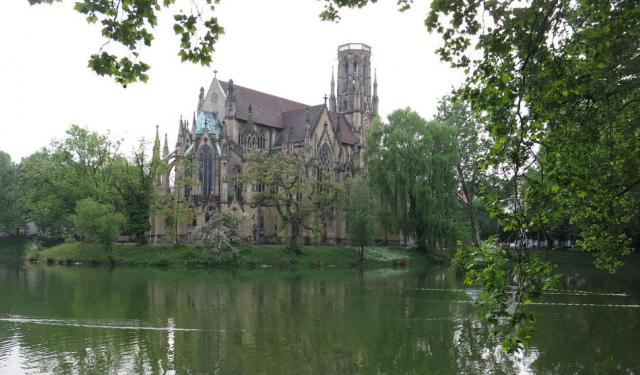 Image by Filip Maljković on Wikimedia under Creative Commons License.

Stuttgart offers a diversity of beautiful churches that serve different religions: Catholic, Old Catholic, Roman Catholic, Evangelical, Protestant, Apostolic and other churches can all be found in Stuttgart. The following walking tour will take you to the most impressive religious places of worship in this charming city.
How it works: Download the app "GPSmyCity: Walks in 1K+ Cities" from iTunes App Store or Google Play to your mobile phone or tablet. The app turns your mobile device into a personal tour guide and its built-in GPS navigation functions guide you from one tour stop to next. The app works offline, so no data plan is needed when traveling abroad.

St. Katherina Church was built in 1863 by architect Professor Heinrich Wagner and this lovely, simple church is a great example of neo-Gothic style. St. Katherina is well known in Stuttgart as the “English Church”. The old walls of this modest Catholic Church hold secrets of its eventful history.
Image by Andres Rueda on Flickr under Creative Commons License.
2

Just a few minutes walking distance from Schossplatz, The Leonard's Church is the second oldest church in Stuttgart. At first the building of the church served as a station for pilgrims of St James. According to the history, at the beginning of the 15th century, the old building was replaced by the church, which became very popular among the locals. Later the church was extended by an additional structure, designed by architect Aberlin Jörg. Check out this classic place of worship in late-Gothic style.
Image by Joachim Köhler on Wikimedia under Creative Commons License.
3

The Stiftskirche Stuttgart (Collegiate Church) is an inner-city church in Stuttgart. It is the main church of the Evangelical-Lutheran Church in Württemberg as well as the parish church of the evangelical (Lutheran) inner-city church district of Stuttgart. Structures of a small Romanesque church from the 10th and 11th centuries could recently be traced as having been exactly in today's church outline.

In 1240, a stately three-naved church with two towers is built in the Romanic style, apparently by the Counts of Württemberg who from around that time are residing in the nearby Old Castle. From the end of the 13th century a double tomb is preserved in today's South tower chapel. It contains the remains of Ulrich I, Count of Württemberg and his second wife, Countess of Württemberg, Agnes von Schlesien-Liegnitz. With the adoption of the Lutheran Protestant Reformation in Württemberg in 1534, all pictures and altars are removed from the naves, pewage and a gallery is added. The tombstones are moved to the interior of the church.

Image by Rosch2610 on Wikimedia under Creative Commons License.
Sight description based on wikipedia
4

Domkirche St. Eberhard was built at the beginning of the 19th century. After the Reformation, it was the first Catholic Church in Stuttgart City. In 1944, the church was destroyed by a bomb, but later underwent restoration led by architect Hugo. The church is also famous for having the second biggest organ in the city as well as a beautiful golden altar.
Image by Enslin on Wikimedia under Creative Commons License.
5

Situated close to Stuttgart city centre, Hospitalskirche or Hospital Church is a massive Medieval church. At first, Hospitalskirche was built as a three-aisled Gothic hall, but after restoration, this tall attractive tower with its six massive bronze bells was added to the main building. Famous composer Leonard Lechner is buried here.
Image by Bear62 on Wikimedia under Creative Commons License.
6

The Protestant Church Johanneskirche (St John) in Stuttgart, built in neo-Gothic style was built from 1864 to 1876 by the Chief Building Christian Friedrich von Leins, it is particualary highligted by its urban location. It lies with the choir on a peninsula over the lake of "Feuersee" (Lake of Fire) or (fire water pond), while the main entrance and tower marks the beginning of the former "Johannesstraße" (St. John's street).

After the second World War the Church was reconstructed up to the main tower, but was left incomplete on purpose. The "Church without a head" applies today as a memorial against war.

Image by Björn Appel on Wikimedia under Creative Commons License.
Sight description based on wikipedia
7

St. Maria Church was built in 1879 by architect Joseph von Egle. The church itself is a fine example of early Gothic style. During the Second World War, the two large church towers burned down, but in 1949, they were successfully restored to their previous beauty. Come here to see the impressive structure of this church and especially the stunning sharp towers.
Image by Aspiriniks on Wikimedia under Creative Commons License.