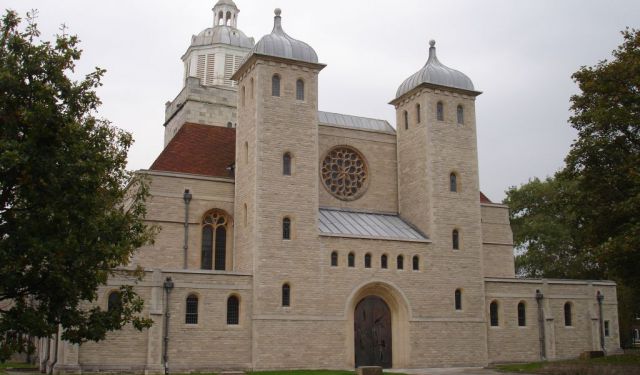 Image by JohnArmagh on Wikimedia under Creative Commons License.

The old church life in Portsmouth is not one of the richest, yet it is most closely connected to the local history and culture. Their history and origins are either connected to real historical events with true personages, or are based on old local legends. In taking the tour you will not only get acquainted with these events and stories but you will also enjoy fine sightseeing of these historical places of worship.
How it works: Download the app "GPSmyCity: Walks in 1K+ Cities" from iTunes App Store or Google Play to your mobile phone or tablet. The app turns your mobile device into a personal tour guide and its built-in GPS navigation functions guide you from one tour stop to next. The app works offline, so no data plan is needed when traveling abroad.

Towards the end of the 17th century it fell into disrepair until it was restored in 1767 to become the Garrison church. On 10 January 1941 the buildings of Domus Dei were partially destroyed in an attack by German bombers. The Garrison church remains, albeit roofless, as a popular tourist attraction. It was also used as the set for Horatio Hornblower's wedding in Hornblower:Duty, 2003.

Image by Margaret Anne Clarke on Flickr under Creative Commons License.
Sight description based on wikipedia
2

The Cathedral Church of St Thomas of Canterbury, Portsmouth, commonly known as Portsmouth Cathedral, is the Church of England cathedral of the City of Portsmouth, England and is located in the heart of Old Portsmouth. It is the seat of the Bishop of Portsmouth. Around the year 1180 Jean de Gisors, a wealthy Norman merchant and Lord of the Manor of Titchfield, gave land in his new town of Portsmouth to the Augustinian canons of Southwick Priory so that they could build a chapel "to the glorious honour of the martyr Thomas of Canterbury". This chapel was to become in turn a parish church in the 14th century and then a cathedral in the 20th century. Between 1902 and 1904 the church was closed for restoration work to be carried out. In 1927 the Diocese of Portsmouth was created. In 1932 Sir Charles Nicholson published plans to enlarge St Thomas's. In 1939, due to the outbreak of World War II, work on the extension scheme stopped, and was not recommenced until 1990.
Image by JohnArmagh on Wikimedia under Creative Commons License.
Sight description based on wikipedia
3

According to some sources, Saint Georges Church has played an important role in the life of the locals and the region. Its construction was not only paid by the local population in the 2nd half of the 18th century, but also built by 15 local shipwrights, 3 people, a carpenter, a grocer and a tallow chandler. For so long it has been the main representative monument of the region of Portsea. Although it has lost some of its territory, its external appearance has lost very little from its original appearance.
Image by Ron Hann on Wikimedia under Creative Commons License.
4

4) Cathedral of St. John the Evangelist

It is important to mention that the Cathedral of St. John the Evangelist is happily situated close to the center of Portsmouth city and also near the royal navy. It has had this same location since the year 1882. From an architectural point of view, the building belongs to 19th century French Gothic architecture; the building has shallow transepts and a curved apse to attest to this. Some parts of the building, especially the areas around the windows, are dressed in Portsmouth stone and these parts proved their resistance when the building was bombed during the 2 World Wars.
Image by Wyrdlight on Wikimedia under Creative Commons License.
5

Tremenheere's successor Father C.W Coles was to serve the parish through two world wars until 1954 when the last service was held. For the next 40 years it became a naval store until the Traditional Anglican Communion took it over for a form of worship very similar to that originally provided by Dolling. The church survived this time largely intact although the lady chapel was demolished in 1964. The church is now also used for concerts but faces an uncertain future as its locale is developed as part of the “Northern Quarter” initiative.
Image by Magnus Manske on Wikimedia under Creative Commons License.
Sight description based on wikipedia
6

St. Mary's Church is considered to be one of the oldest of the area. It was even traced back to the 11th century. Although the church building was erected in the year 1880, it does keeps its tours proudly visible miles around, just like the old churches were. An interesting fact about the place is that it has been steadily visited for over 120 years.
Image by Basher Eyre on Wikimedia under Creative Commons License.