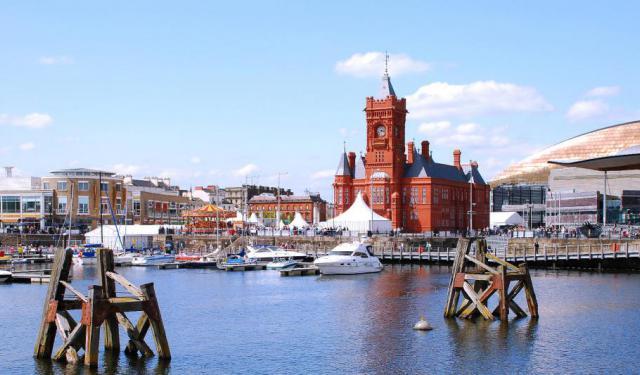 Image by Nick Russill on Wikimedia under Creative Commons License.

The long and rich history of Wales is reflected by the presence of beautiful religious buildings. Cathedrals and churches had always dominated the architectural landscape of Britain. Take this self-guided walking tour to discover Cardiff's most beautiful places of worship.
How it works: Download the app "GPSmyCity: Walks in 1K+ Cities" from iTunes App Store or Google Play to your mobile phone or tablet. The app turns your mobile device into a personal tour guide and its built-in GPS navigation functions guide you from one tour stop to next. The app works offline, so no data plan is needed when traveling abroad.

1) The Norwegian Church (must see)

The Norwegian Church in the Cardiff Bay area of the city of Cardiff, Wales, is a historic church building and formerly a place of worship for the Norwegian community in Cardiff. In the 19th century, Cardiff was one Britain's three major ports, along with London and Liverpool. The Norwegian merchant fleet at the time was the third largest in the world, and Cardiff became one of the major centres of its operations. Sjømannskirken – the Norwegian Church Abroad organization, which is part of the Church of Norway – followed in its footsteps and established a church in Cardiff Bay in 1868 to serve the religious needs of Norwegian sailors and expatriates. The building is now used as an arts centre, and is known as the Norwegian Church Arts Centre.
Image by TR001 on Wikimedia under Creative Commons License.
Sight description based on wikipedia
2

The church was constructed in 1900 to replace a temporary iron frame church and opened as the chapel of St. Mary's. In 1912, it became a separate parish under the name of St. Stephen. The parish was deconsecrated in 1992 and the church was used as a community centre and theater until 2001, when it was purchased by its current owners. Tremendous renovations in 2003 transformed the church into a venue for live music performance and regular club-nights, including Bogiez. The entire building was restored and much of the original architecture was kept, including all the stained glass windows.
Image by Seth Whales on Wikimedia under Creative Commons License.
Sight description based on wikipedia
3

The church is first mentioned in the Taxatio Ecclesiasticus of Pope Nicholas IV in 1291 and was probably built in 1260. Since then it has undergone many repairs and alterations. Archaeologia Cambrensis in 1901 describes its 1848 state as a "a small church on an abrupt eminence, where was a Roman encampment." It was substantially rebuilt by the Reverend Victor Jones in 1960-61. In 1973 it was closed and deconsecrated and it has subsequently deteriorated into a ruin. Since 1999 a group of former and current parishioners, the Friends of St. Mary’s Church at Caerau, have been campaigning to preserve and commemorate the remains of the church. The church is open for visits and worship and other events.

Image by rog.davies on Flickr under Creative Commons License.
Sight description based on wikipedia
4

The church was built in 1821 to host congregational services for Hayes district and then remodeled in 1865. The church boasts a large congregation and has an eye-catching structure. This large church interior has beautiful ornamentations in its well-lit, spacious hall: it has old furniture with a warm feel, striking stained glass, a gorgeous carved pulpit and a magnificent organ.
Image by Watt Dabney on Flickr under Creative Commons License.
5

The original church was built at a cost of £2,124 in 1842, after fundraising in Wales and Ireland and a donation by Lady Catherine Eyre of Bath. The current building was designed by Pugin and Pugin Architects and constructed 1884-87. It was Cardiff's principal Catholic church, and it became seat of the Roman Catholic Archbishop of Cardiff in 1916. In 1920 it was declared the Cathedral Church of the new Archdiocese of Cardiff. The Cathedral was destroyed by World War II bombing in March 1941 when incendiary bombs pierced the roof. During the 1950's it was restored and rebuilt, under the supervision of F. R. Bates, Son, and Price and was re-opened in March 1959.

Image by Roger Cornfoot on Wikimedia under Creative Commons License.
Sight description based on wikipedia
6

The modest Ebenezer Chapel is found in the city centre on Charles Street in front of the Cardiff Metropolitan Cathedral. It was built in the middle of the 19th century. Interestingly, the stones used in its construction were brought here from all over the world at a time when the Welsh coal industry development was at its peak. The church has a congregation of a few hundred Welsh speakers.
Image by miqul on Flickr under Creative Commons License.
7

City United Reformed Church was erected in the middle of the 19th century by the Scottish Presbyterians drawn here by influential aristocrats and industrialists in the time of the 2nd Marquis of Bute. The original, well-preserved Victorian houses surrounding the church complete the beautiful, 19th-century street image. Today this church is the head office of the Churches Together Bookshop, as well as Cardiff’s Adult Christian Education Center. Its beautifully decorated facade with white brick ornamentation and lovely sharp Gothic tower have been prominent landmarks of the area.
Image by Patrick Murphy on Flickr under Creative Commons License.
8

The Cardiff’s oldest church of St John the Baptist is situated in the city centre. It was built in the 12th century as a chapel; an addition to the busy St Mary Church. The chapel expanded and gained a perpendicular tower and a set of ten bells in the 15th century, when it was elevated to a parish church. Today it hosts many religious events and celebrations. The most distinctive feature of the beautiful interior of the church include Gothic columns and arches, the organ, old paintings and stained glass.
Image by Watt Dabney on Flickr under Creative Commons License.
9

9) St Mary of the Angels Church

St Mary of the Angels Roman Catholic Church is located in Canton, Cardiff. It is part of the Roman Catholic Archdiocese of Cardiff. It opened on November 3, 1907. The Parish Priest is Monsignor John Maguire and he is assisted by Fr. Andrea Bord. The church architect was F.A. Walters and was built by W.T. Morgan. In January 1941, the sacristies and St Ann's Chapel in the church were destroyed by an air raid.

The church was reordered inside to comply with new Liturgical laws in 2000. The parish is currently taking responsibility for the parish of Sacred Heart, Leckwith, Cardiff, following the transfer of the Parish Priest to Abertillery and Brynmawr.

Image by fradaveccs on Flickr under Creative Commons License.
Sight description based on wikipedia