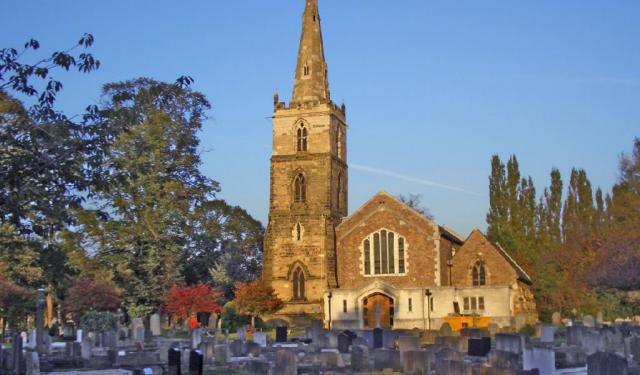 Leicester is a multicultural city that supports a variety of religious communities. Next to Christian churches you can find mosques and Buddhist temples. Virtually every established faith is represented in Leicester. Explore Leicester's most notable places of worship and learn more about the cultural and religious life of the city on this tour.
How it works: Download the app "GPSmyCity: Walks in 1K+ Cities" from iTunes App Store or Google Play to your mobile phone or tablet. The app turns your mobile device into a personal tour guide and its built-in GPS navigation functions guide you from one tour stop to next. The app works offline, so no data plan is needed when traveling abroad.

The Synagogue of Leicester is located on the corner of Tichborne Street and Highfields Street. It was built in 1898 with the help of the Mayor of Leicester, Israel Hart, who supported the Jewish community. This graceful building has a lovely blue dome and a golden inscription over the entrance. Today it’s listed as a historical landmark. Entrance is free, and group tours can be organized by request.
Image by kiranparmar on Flickr under Creative Commons License.
2

Leicester Central Mosque was founded in 1968 by Muslims from Pakistan. The Mosque owns a large portion of land surrounding the building, and the overall complex is quite impressive. You can tour the grounds, but you may not enter the mosque if you are not a Muslim or if you are a woman. The center's attitude toward women is gradually becoming more tolerant, and there is now a dedicated sports hall for women. Leicester Central Mosque is today one of 31 mosques in the city.
Image by stephenlamb on Flickr under Creative Commons License.
3

The churchyard of St. George's Church, located between Colton and Queen Streets, is a green island in the city center. The former Anglican Church was built in 1826 and was recently transformed into a Greek Orthodox Church. Today it serves as a place of worship for the Orthodox community of Serbia. It was reconstructed after a fire in 1911. The solid building resembles a medieval castle and has elegant towers. Its green yard is an oasis of tranquility in the busy heart of Leicester.
Image by NotFromUtrecht on Wikimedia under Creative Commons License.
4

Central Baptist Church is situated in the very heart of the city and is home to several Baptist communities, which have since combined into one. The church has deep roots in the missionary movement, which is why the church houses a museum dedicated to William Carey, one of the founders of the Missionary Society. It is open on Sundays or by appointment. The church also has a Center and a Sunday Club for children.
Image by Steve Cadman on Wikimedia under Creative Commons License.
5

St. Margaret's is a majestic 13th-century church located on St. Margaret's Way in the modern area of the city. The church was built by the Danes, who converted to Christianity and lived next to the English outside of Leicester. Processions on Holy Day go from the church of St. Mary de Castro and Leicester Cathedral to St. Margaret's Church. Despite its location off the beaten tourist path, you should make an effort to visit this beautiful church. You can tour the inside on Saturdays.
Image by NotFromUtrecht on Wikimedia under Creative Commons License.
6

All Saints Church, Leicester, is a redundant Anglican church in High Cross Street, Leicester. It has been designated by English Heritage as a Grade I listed building, and is under the care of the Churches Conservation Trust. Although it is situated away from the present city centre, at the time the church was built it was at the heart of the city.

In the Domesday Book it is recorded that Leicester had six churches, and it is assumed that All Saints was one of these. In 1143 it was given to Leicester Abbey. The church was enlarged in about 1300 when aisles were added. During the following century the tower and the nave were raised and new aisle roofs were built. In 1583, during outbreaks of the plague, the assizes were held in the church. Later the local population and businesses in the city moved elsewhere in the city, and All Saints parish combined with other local parishes.

Image by Leicesteographer on Flickr under Creative Commons License.
Sight description based on wikipedia
7

Leicester Cathedral, or the Cathedral Church of St Martin is the fourth smallest Anglican cathedral in England. A church dedicated to St Martin has been on the site for about a thousand years, being first recorded in 1086, when the older Saxon church was replaced by a Norman one. The present building dates to about that age, with the addition of a spire, and various restorations throughout the years. Most of what can be seen today is a Victorian restoration by architect Raphael Brandon. A memorial stone to King Richard III is located in the chancel of the church. He is not actually buried there, having been originally buried in the Greyfriars Church in Leicester. The church was elevated to a Collegiate Church in 1922, and made a cathedral in 1927, following the establishment of a new Diocese of Leicester in 1926.
Image by David Spender on Flickr under Creative Commons License.
Sight description based on wikipedia
8

Jainism is an Indian religion that has several million followers worldwide. The Jain Center in Leicester is the only place of its kind in Europe and boasts a collection of consecrated paintings. This beautiful temple, located near De Monford University, is the pride of the city. This traditional Jain temple has marble front columns and stairs. It gathers followers of Jainism from Leicester and from all over the United Kingdom.
Image by Mean Mr Mustard on Flickr under Creative Commons License.
9

One of the main Hindu temples in Leicester, Shree Jalaram Prarthana Mandal (Sri Jalarambapa Temple), is located in the central part of the city at the intersection of Narborough Road and Westcotes Drive. This new temple is devoted to Shri Jalarambapa, an importatn Hindu saint. Wall decorations inside the temple tell the story of his life. The Hindu faith is based on the principles of caring for one another. The temple is a religious center with a library and courses for children. It is the main place of worship in Leicester for followers of Hinduism.
Image by stevecadman on Flickr under Creative Commons License.