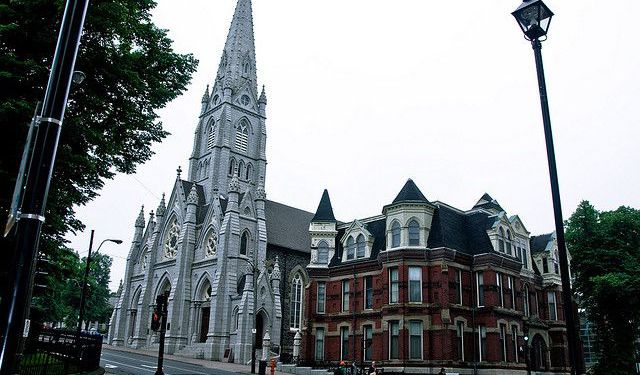 Image by baekken on Flickr under Creative Commons License.

Halifax contains a variety of religious buildings, including Brunswick Street United Church and Saint George's Church, as well as old Gothic ones such as Saint Mary's Basilica and Saint Patrick's Church. Besides their beautiful architecture, each one has a unique history all its own.
How it works: Download the app "GPSmyCity: Walks in 1K+ Cities" from iTunes App Store or Google Play to your mobile phone or tablet. The app turns your mobile device into a personal tour guide and its built-in GPS navigation functions guide you from one tour stop to next. The app works offline, so no data plan is needed when traveling abroad.

St. Matthew's United Church was founded at the same time as the original colony in 1749 as a home for the various groups of Protestants who did not follow the Church of England. It originally met Sunday afternoons in St. Paul's Church, the Church of England building completed in 1750. The church got its own home in 1754 when a church was constructed at Hollis and Prince Streets. This building was destroyed by fire in 1857, and a new church was built at the current location at 1479 Barrington Street.

The church was originally an amalgam of various dissenting Protestant groups with it mostly being a mix of Scottish Presbyterians and Puritan Congregationalists from the American colonies. Over the course of the 19th century the number of Presbyterians gradually increased and they came to dominate the church.

Image by cphoffman42 on Flickr under Creative Commons License.
Sight description based on wikipedia
2

St. Mary's Cathedral Basilica is a Catholic cathedral located in downtown Halifax. The facade and spire are entirely of local granite, and its architectural design is said to have been inspired by Saint Martin in the Fields in London. Construction began in 1820 and it was finally consecrated on October 19, 1899. It was made a basilica in 1950 by Pope Pius XII. The basilica also boasts the tallest granite spire in North America. Saint Mary's is the cathedral church of the Archdiocese of Halifax. It is the largest Catholic church in the Archdiocese.
Image by baekken on Flickr under Creative Commons License.
Sight description based on wikipedia
3

The Church of Saint David opened its doors to the Presbyterian community in 1925. Named simply the Presbyterian Church until 1930, it was renamed in honor of King David I of Scotland. The first Presbyterian church in the city, in 1969 the present structure was raised, developed by David Sterling, a talented and well-known architect, in the English College Chapel style.
Image by SibleyHunter on Flickr under Creative Commons License.
4

St. Paul's Church is an evangelical Anglican church, that takes its name from Paul of Tarsus, the apostle famous for his conversion while travelling to Damascus. Founded in 1749 (the same year as the Halifax colony), it is the oldest still-standing Anglican church in Canada. The building was begun in 1750 (making it the oldest surviving structure in the city of Halifax) and is based on the ground plan of the Gibbs' Marybone Chapel of St. Peter's, Vere Street in London, with later additions such as a larger tower.

Reverend William Tutty (1715-1754) opened St Paul's Church on September 2, 1750. With the creation of the Diocese of Nova Scotia in 1787, St. Paul's was given the Bishop's seat, making it the first Anglican cathedral outside of Great Britain. It served as the cathedral from 1787-1864. Saint Paul's has a royal pew, and many royal guests have visited, including the father of Queen Victoria, the Duke of Kent, and Princesses Michael, Margaret, Alexandra, and Queen Elizabeth II, and Prince William Henry in 1786 (later King William IV), Edward in 1860 (later King Edward VII), and Prince Edward in 1987.

Image by wolfsavard on Flickr under Creative Commons License.
Sight description based on wikipedia
5

Brunswick Street United Church, a uniquely designed church in the center of the city, differs from other buildings on Brunswick Street with its gray walls, bright red front door and nonstandard form. In the 1830s, when a fire destroyed the former Methodist church, the present church was constructed. It is also an active participant in many diverse events and missions.
Image by Scott Baltjes on Flickr under Creative Commons License.
6

Saint George's, an Anglican church not far from Brunswick Street United Church, is distinguished for its Palladian circular form, which is unusual among religious constructions. The present church, raised in 1800, was designed by Edward, Duke of Kent. From 1822 to 1827 the church endured a number of improvements, but kept its original exterior.
Image by Francisco Silva on Flickr under Creative Commons License.
7

Saint Patrick's, a Roman Catholic church, was designed by architect Henry Peters in 1882 in the Victorian Gothic style. It received a number of improvements, including the installation of frescoes, a beautiful altar, new shrines and many other details which refined its look. Since the 1980s it has been considered a heritage site, as well, the church’s organ has received this status.
Image by Scott Baltjes on Flickr under Creative Commons License.
8

Established in 1989, All Nations Christian Reformed Church shared the building with the J. Wesley Smith United Church on Robie Street. In 1994, it became exclusive to the Christian Reformed congregation and underwent a series of renovations. Possessing Gothic and Classical features, it often hosts diverse events and celebrations.
Image by Scott Baltjes on Flickr under Creative Commons License.
9

Saint Theresa's, a Roman Catholic church in the heart of the city, was raised in 1957. This beautiful structure on North Street is adorned with statues and other impressive architectural elements. Built of gray brick, this church has a classic and noble look to it.
Image by Scott Baltjes on Flickr under Creative Commons License.