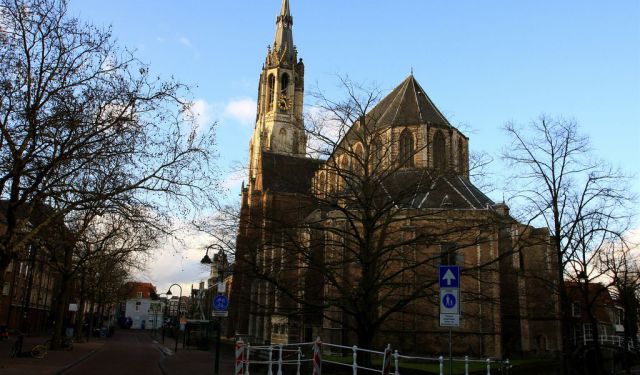 Image by TravelingOtter on Flickr under Creative Commons License.

Delft is a beautiful old town with lots of history reflected in its buildings. Old churches have dominated the skyline of Delft for centuries. Their stories are unique and interesting. Take this self-guided walking tour to visit the town's most prominent places of worship.
How it works: Download the app "GPSmyCity: Walks in 1K+ Cities" from iTunes App Store or Google Play to your mobile phone or tablet. The app turns your mobile device into a personal tour guide and its built-in GPS navigation functions guide you from one tour stop to next. The app works offline, so no data plan is needed when traveling abroad.

Evangelist Lutheran Church, previously known as St George's Chapel, is an attractive church situated at Noordeinde Street. One of the oldest churches to be built in Delft, the church dates back to the 16th century when it was used as a chapel for St. George Hospital. It was erected on the site of an even older church. In the middle of the 18th century, it was used as a Delft artillery depot. In 1768 it gained a new facade designed by Nicholas Terburgh and was transformed into the Lutheran Church. This place of worship is one of the few buildings to have survived the Great Fire in 1536.
Image by Michiel1972 on Wikimedia under Creative Commons License.
2

The church possesses three pipe organs, from the years 1857 (main organ), 1873 (north aisle) and 1770 (choir). The most massive bell in the tower, cast in 1570 and called Trinitasklok or Bourdon, weighs nearly nine tonnes, and because of its strong and potentially damaging vibrations, is rung only on such special occasions as the burial of a Dutch royal family member in the nearby New Church. The massive bell is also sounded during disasters, when local air-raid sirens are sounded. This, however, does not happen during the siren's monthly, country-wide test, which happens every first Monday of the month.

Image by ja_macd on Wikimedia under Creative Commons License.
Sight description based on wikipedia
3

Situated by the Oude Delft canal at the corner of Neuve Street, the Saint Hippolytus Chapel was built at the very end of the 14th century as a place of worship for the Holy Spirit Nurses. Extensive restoration works were carried out here in the 1920s. In 1972 it was named after Saint Hippolytus of Rome – a prominent Roman Catholic Church personage of the third century who is known to have died as a martyr.
Image by M.Minderhoud on Wikimedia under Creative Commons License.
4

Nieuwe Kerk is a landmark Protestant church in Delft. It is located on Delft Market Square (Markt), opposite to the City Hall (Dutch: Stadhuis). In 1584, William the Silent was entombed here in a mausoleum designed by Hendrick and Pieter de Keyser. Since then members of the House of Orange-Nassau have been entombed in the royal crypt. The latest are Queen Juliana and her husband Prince Bernhard in 2004. The private royal family crypt is not open to the public. The church tower is the second highest in the Netherlands, after the Domtoren in Utrecht.

The New Church is the burial place of the princes of Orange. It is remarkable for its fine tower and chime of bells, and contains the splendid allegorical monument of William the Silent and the tomb of Hugo Grotius. The tower was built 1396-1496 by Jacob van der Borch. The monument for Hugo de Groot was made in 1781. The mechanical clock has 18 bells by Francois Hemony from 1659 and 30 modern bells. In the church tower there is a bell from 1662 by Francois Hemony with a diameter of 104 centimeters. In the tower there are also bells no longer in use, including 13 from 1659 by Francois Hemony, 3 from 1678 by Pieter Hemony, 3 from 1750 from Joris de Mery, and 1 from Gillett and Johnston from 1929.

Image by Microtoerisme on Wikimedia under Creative Commons License.
Sight description based on wikipedia
5

Jesse De Maria Church is a Roman Catholic and a part of St. Ursula Parish built at the end of the 19th century. It was designed by Evert Margy in neo-Gothic architectural style. Originally, the church was erected in honor of St. Joseph. This church was the first Catholic place of worship established in the town center after the Reformation. The church's two beautiful towers symbolize two historical religious eras.
Image by M.Minderhoud on Wikimedia under Creative Commons License.
6

The Synagogue was built in 1861 and its grand opening took place a year later under the patronage of Rabbi BS Hague Berestein. During its history this Jewish place of worship has been used as a Red Cross warehouse and a town music school. It has been home to various cultural events in Delft as well. With four beautiful Ionic columns and straight design lines, the synagogue's elegant facade reflects typical neoclassical architecture. From 2006 the buildings is used by Klal Israel for Jewish gathering which take place here twice a month.
Image by M.Minderhoud on Wikimedia under Creative Commons License.
7

The South Church in Delft is a former Dutch Reformed church built in a courtyard. The church was opened in 1888 to a design by G. van der Kaaden, with elements borrowed from the Renaissance and Classicism.

Initially the church was used for services of the Low German Reformed Church, a religious movement that a few years earlier had separated from the nationwide Dutch Reformed Church under the influence of Abraham Kuyper. The church was later named "South Church". The first pastor of this church was Rev. C.W.J. van der Lummel. In the mid-20th century it faced a sharp decline in membership, and the church closed. In 1965 the building was sold to a hardware store, and in 1983 it became a flea market. In 1990 the building was purchased by the evangelical church "Morgenstond", who rebuilt it during two years. Since 1992 the church is in use of the evangelical church.

Image by M.Minderhoud on Wikimedia under Creative Commons License.
Sight description based on wikipedia
8

Vredeskerk Church, also known as the Peace Church and Sacrament Church, is a Roman Catholic parish church built in 1940. The church's unpretentious look was designed by architects Thunnissen, van Rossum and Hendricks. The large letters above entrance mean peace – the relic from the Peace Week event held in Delft in 1974. The unusual clock-tower of the church was listed a national monument in 2002.
Image by Michiel1972 on Wikimedia under Creative Commons License.