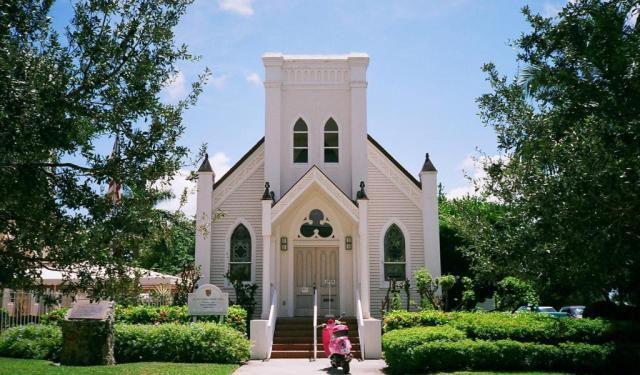 Image by Phillip Pessar on Flickr under Creative Commons License.

Most churches in West Palm Beach were constructed in the 19th century and are magnificent embodiments of the variety of architectural styles of that epoch. Take this tour to discover those places of worship that are valued not only for their contribution to the community but also for their intrinsic architectural value.
How it works: Download the app "GPSmyCity: Walks in 1K+ Cities" from iTunes App Store or Google Play to your mobile phone or tablet. The app turns your mobile device into a personal tour guide and its built-in GPS navigation functions guide you from one tour stop to next. The app works offline, so no data plan is needed when traveling abroad.

Located on Ninth Street, the Payne Chapel African Methodist Episcopalian Church was established in 1893. It is one of the oldest churches in Palm Beach County. The original church was located on Banyan and Tamarind Avenue, in the Styx, and was named the Bethel Chapel. The church received its current name in 1894.

The original founders were Ed Walstine, Philip Akery, Bell Jones, Susan Gee Cook, Margaret Akery, D. Jones, and Haley Mickens. The original trustees were J.J. Gordon, D.J. Jones and Philip Akery. In 1928, a hurricane destroyed the church. In 1937, construction on the second church, located on Ninth Street, was completed. During 1963 to 1968, the current church was built.

The AME religion was founded in 1816 by Reverend Richard Allen to serve the needs of black parishioners who wanted autonomy. The African Methodist Episcopalian church roots are Methodist, not African, while its government is Episcopalian in nature. People of all races are welcome to attend services.

For over 100 years, the church has worked tirelessly to carry out its mission to “promote the spiritual, intellectual, and economic growth of all people.” Church services are at 9:30 am on Sunday. Outreach ministry services are at 11:30 am and bible study is at 7 pm on Wednesdays.

Image by brandi sims on Flickr under Creative Commons License.
2

Founded in 1893, the Tabernacle Missionary Baptist Church is one of the finest architectural jewels of the city. Designed in the Romanesque Revival style, it housed the first school for African Americans in West Palm Beach. Informally known as "God's House on the Hill," the Tabernacle Missionary Baptist Church still plays an active role in the life of the African American community. It regularly hosts an array of events and educational activities both for children and adults. The Tabernacle was successfully renovated in 2004, after suffering damages mounting to $1 million due to Hurricanes Frances and Jeanne.
Image by Martin Beek on Flickr under Creative Commons License.
3

Located on North Olive Avenue, St. Ann’s Catholic Church is the oldest Catholic Church in the Diocese of Palm Beach. It was established in 1896 by the Fathers of the Society of Jesus and moved to its current location, from the southeast corner of Rosemary and Datura Streets, to North Olive Avenue in 1902. The church is home to the St. Ann’s Catholic School that opened in 1923.

St. Ann’s has several programs that serve the community. The church has an outreach center that helps homeless men and women by giving them breakfast and lunch, housing assistance, healthcare services, and job support assistance. They also have a food pantry, a substance abuse ministry, and a hospital ministry.

The place of worship offers many interesting events for its parishioners. Fish fries, book readings, Soup and the Sunday Scriptures, and retreats are a frequent occurrence. A family mass, which is targeted to the younger generation, is celebrated on the first Sunday of each month.
Image by Phillip Pessar on Flickr under Creative Commons License.
4

Located on Olive Avenue and Evernia Street, the First Presbyterian Church features a Spanish Colonial design. The building was designed in 1925 by architect Arthur Harmon for the Central Farmer’s Trust Company Bank. The building was added to the West Palm Beach Register of Historic Places in 1996.

Harmon is best known for being a partner of the firm Shreve, Lamb and Harmon. He also helped to design the Empire State Building. Other buildings designed by Harmon include 740 Park Avenue, 3 Park Avenue, the Jerusalem International YMCA, and the Ten-Eyck-Troughton Residence.

The bank closed during the depression and was purchased in 1934 by the church. The beautifully designed building features arched entrances and windows, an iron balcony and window grills, and ornamental stone accents. The church has an adjacent building that features a walled courtyard.

Visitors to the church will be greeted by a warm and friendly congregation. The church provides hot meals to the needy on Mondays from 5 pm to 6 pm. Sunday Service is at 10:30 am and a bible study is offered on Thursdays from noon to 1 pm. The church has a multiethnic congregation. An average of 250 to 499 people attends services each week.
Image by eye2eye on Flickr under Creative Commons License.
5

Holy Trinity was founded by a Women's Guild in the 1896. It began holding its first regular services a year later in the old church located in downtown West Palm Beach. Its present location overlooks the Intercoastal Waterway and was purchased in 1917. The most striking features of the design of the church are its magnificent ceiling and stained glass windows that tell the story of early Christianity.
Image by NYC Wanderer on Flickr under Creative Commons License.
6

This 5000-member church was built between 1963 and 1965. The chapel was designed by Ivey & Crook and was completed first. The church itself is the work Maurice E. Holley Sr. and was not finished until 1965. However, the history of the church goes back over 100 years to the 19th century.
Image by andycoan on Flickr under Creative Commons License.
7

The Royal Poinciana Chapel started its activity in 1897 through the efforts of the Rev. Alexander B. Dilley. Soon it managed to attract Henry Flager's interest and was renovated into a 400 seat structure designed to offer a place of worship for the guests of the Royal Poinciana Hotel that was to be built nearby. The chapel follows to this day the Five Principles laid out by Henry Flager back in the 19th century. First, the Chapel is nondenominational. Second, it is the freest pulpit in America. Third, it has the finest preaching. Fourth, it has the best music. Fifth, it has no debt. Currently, Rev. Dr. Robert S. Norris, a graduate of Princeton's Theological Seminary, is the pastor of the Royal Poinciana Chapel.
Image by Randy OHC on Flickr under Creative Commons License.
8

Temple Emanu-El was the first synagogue founded in West Palm Beach. Its history began in 1962 with a group of enthusiastic Jewish pioneers led by Benjamin Lehr z"l, who in cooperation with some Christian clergymen managed to gain permission to establish a charter. Although initially Shabbat services were held in the Episcopal Church of Bethesda-by-the-Sea, it soon became apparent that the congregation needed its own place of worship. In 1964, the Temple moved into its first home on Sunrise Avenue. The modern sanctuary was built 30 years later in the early 1990s.
Image by Tahmid Munaz™ on Flickr under Creative Commons License.