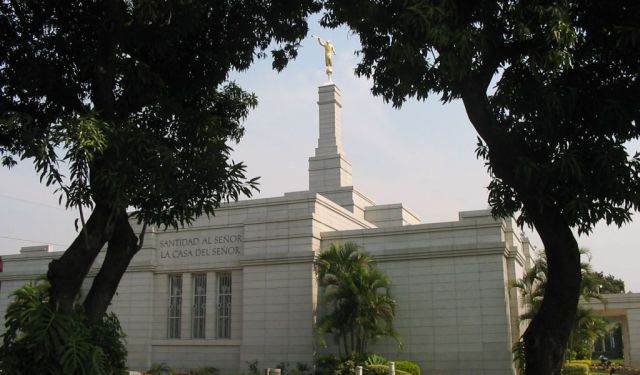 Image by Bwood720 on Wikimedia under Creative Commons License.

Asuncion is home to a variety of sacred places, religious sites and temples. Although Asuncion is predominantly Roman Catholic, the Protestant, Baha'i, Buddhist, and Jewish faiths are also represented. Take this tour to visit Asuncion's most notable religious buildings.
How it works: Download the app "GPSmyCity: Walks in 1K+ Cities" from iTunes App Store or Google Play to your mobile phone or tablet. The app turns your mobile device into a personal tour guide and its built-in GPS navigation functions guide you from one tour stop to next. The app works offline, so no data plan is needed when traveling abroad.

In Paraguay, devotion to María Auxiliadora began with the arrival on July 23, 1896, of the Salesians, a Roman Catholic religious order. The Salesians founded Bishop Lasagna School, which had an attached chapel dedicated to Our Lady María Auxiliadora. Construction on a large sanctuary began on May 24, 1980. In 1985, the dome, stained glass windows and floors were completed. The sanctuary was blessed in 1989 by the archbishop of Asunción, Bishop Ismael Rolon. Today, devotion to María Auxiliadora is widespread throughout Paraguay.
Image by Guillermo Sandoval under Creative Commons License.
2

Built in 1889, Iglesia de la Encarnacion is a temple of worship located in the hills of the city. The church was designed by Italian architect Juan Colombo in the Roman Corinthian style, similar to other European cathedrals. Gothic elements are evident throughout the church. The interior of the church is brightly illuminated, as numerous windows let in the natural light.
Image by Tomás Martínez Mora on Wikimedia under Creative Commons License.
3

Originally built in 1687, Catedral Metropolitana was reconstructed in the middle of 19th century. Designed by architect Carlos Zucchi, the cathedral is noted for its huge golden altar and religious art. The cathedral's altar is decorated with Jesuit and Franciscan silver and is enchanting to the eye.
Image by FF MM on Wikimedia under Creative Commons License.
4

Iglesia San José is a Romanesque-style chapel that was inaugurated in 1934. It remains one of the largest churches in the capital of Paraguay. San Jose (Joseph), husband of the Virgin Mary, is considered the universal patron of the church. The congregation annually celebrates the birth of the church with a formal ceremony and an art festival.
Image by Moroder on Wikimedia under Creative Commons License.
5

The Asunción Paraguay Temple is the 112th operating temple of The Church of Jesus Christ of Latter-day Saints (LDS Church).

In 1977 Paraguay became its own mission area and soon after converts to the LDS Church began to increase. In the year following the announcement 400 people were baptized into the Church. Currently, there are approximately more than 152,000 Mormon members in Paraguay. On February 3, 2001 the site for the Asunción Paraguay Temple was dedicated and a groundbreaking ceremony was held. An open house was held Saturday May 4-11, 2002. This allowed Mormons and those not of the Mormon faith to see the inside of the temple and learn more about what takes place inside.

Image by FF MM on Wikimedia under Creative Commons License.
Sight description based on wikipedia
6

Located in Ascunsion's Recoleta district, the Blessed Sacrament, better known as Iglesia de la Recoleta, is named after the Franciscan, Recollect, who reconstructed the abbey. This Baroque church was completed in 1829, although the parish boundary was modified several times. It was constructed during the reign of President Carlos Antonio Lopez. In 1862, the president imported materials from Europe to beautify the church's cemetery.
Image by FF MM on Wikimedia under Creative Commons License.