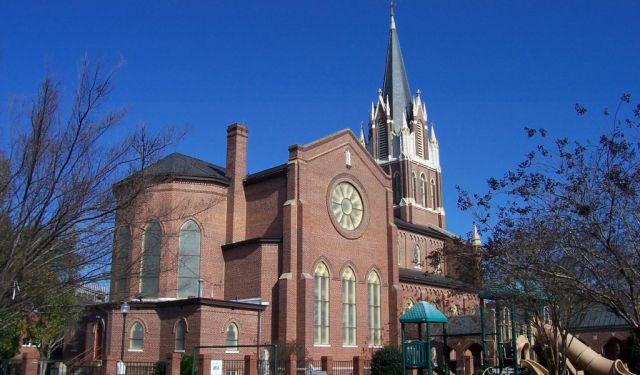 Image by Abductive on Wikimedia under Creative Commons License.

Columbia has a variety of religious buildings, new and old that have an important cultural, historical and religious value in the entire South Carolina district. Most of them were renovated due to wars and natural causes but almost all of them tried to preserve the initial style elements that make them unique and attractive to tourists. This tour will guide you to some of the most famous churches in Columbia.
How it works: Download the app "GPSmyCity: Walks in 1K+ Cities" from iTunes App Store or Google Play to your mobile phone or tablet. The app turns your mobile device into a personal tour guide and its built-in GPS navigation functions guide you from one tour stop to next. The app works offline, so no data plan is needed when traveling abroad.

Holly Trinity Greek Orthodox Church represents a spiritual home for those families from Columbia and all of South Carolina who believe in God and who consider the influence of the Greek church important. The church was established in 1936 and keeps services and traditions until today. The most recent news is that this church is building a new sanctuary that will have a Byzantine architectural style, more modern and more comfortable for people because of air conditioning, arches and electric conduits. The interiors are made of stone and will soon be open to the public.
Image by seyed mostafa zamani on Flickr under Creative Commons License.
2

Ebenezer Lutheran Church is a spacious and beautiful church that was built in 1931, designed by architect James B. Urquhart in Neo-Gothic Style, with a nice bit of Art-deco features. The Lutheran congregation appeared in Columbia in 1831. In 1993 the building of the church was dedicated to this Ebenezer church. Because this religious movement was very important, the location, the pastors, the staff and all things related to this church were taken care of right away. Now it is a place where people come to pray and even to celebrate some important religious holidays where a beautiful choir attracts your attention through their repertoire and beautiful interpretation.
Image by anslatadams on Flickr under Creative Commons License.
3

St. Peter's Roman Catholic Church is located at 1529 Assembly St. in Columbia. This is the second building of the oldest Catholic parish in Columbia and the Midlands of South Carolina. The first resident Catholic priest came to Columbia in 1820. St. Peter's first church, designed by the South Carolina architect Robert Mills, was completed in 1824. This church was demolished in the early 1900s to build the new sanctuary.

The new church was designed by Frank Pierce Milburn, a Southern architect. Construction started in 1906 and was completed in 1908. The Gothic Revival church was built with dark red brick with Bedford limestone and dull glazed terra cotta trim. The roof was Buckingham Slate. The spire is topped with a cross and is 163 ft above grade. The church has a cruciform plan with a high nave. It is 131 ft long and 79 ft wide. The nave is 64 ft long and 51 ft tall. The 3,500 lb, 55 inches diameter bell was cast in 1911 by McShane Bell Foundry in Baltimore, Maryland.

Image by KudzuVine on Wikimedia under Creative Commons License.
Sight description based on wikipedia
4

Bethel A.M.E. Church is a historical church that was built in 1921 and was included in the National Register in 1982. It has a Romanesque architectural style built by the African American architect John Anderson Lankford, one of the first registered African American architects. The church has a rectangular form with two towers in front of the building. The first tower is three stages above the basement and the second tower two stages above the basement. The facade center has a three-arched stained window. There are no services held any more but it has another mission, that of becoming a religious center for all the people that believe in God.
Image by hotmayo on Flickr under Creative Commons License.
5

The following year, in 1860, the Church was the site of the first state convention to discuss secession following the election of Abraham Lincoln as President of the United States. It was chosen because it was the largest meeting place in Columbia. Under the chairmanship of D. F. Jamison, a unanimous vote of 159-0 in favor of secession on December 17, 1860 led to South Carolina seceding from the United States Six other states would follow South Carolina's lead before the Battle of Fort Sumter; some felt if they did not secede now, they might lose the argument that a state had the right to secede, a right that has never been confirmed or denied by a court of law.

Image by Jack Boucher on Wikimedia under Creative Commons License.
Sight description based on wikipedia
6

The 1813 building still exists, and is now known as Jackson Hall. A new, larger English Gothic structure was built in 1854. Though spared the torch during Sherman's march to the sea, the building's original 180-foot spire was destroyed in an 1875 hurricane, and rebuilt in 1888. The spire was again damaged in a 1910 fire, and rebuilt to be eight feet taller. A remodeling in 1925 increased the capacity of the building to 1,250 from 800, increasing the length of the building by 40 feet. At the same time, classrooms were built at the sides, a choir loft added in the rear, and the organ loft rebuilt.

Image by Abductive on Wikimedia under Creative Commons License.
Sight description based on wikipedia
7

Zion Baptist Church has a long history of evolution and development. It was built in the late 19th century in Neo-Romanesque style. It is located on the corner of Washington and Gadsden Streets. Till the present day, due to different historical events, the church was destroyed many times, but thanks to numerous people and pastors, they succeeded in renovating and even in building new locations from scratch. During its 145 of years of existence, many important events and transformations took place. Due to these events, the main mission of the church is now to sustain its worship, to promote its values, to seek and help people in their salvation and to avoid anger.
Image by Lel4nd on Flickr under Creative Commons License.