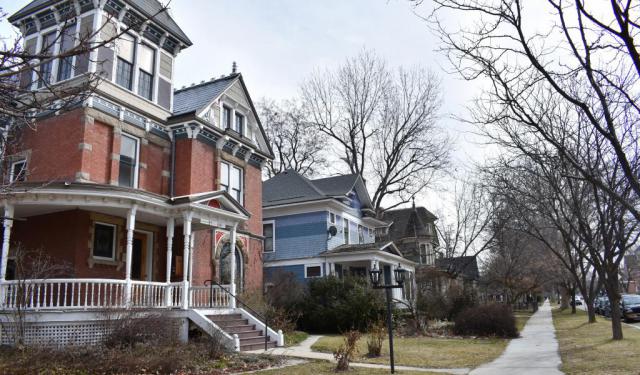 Image by Roman Eugeniusz on Wikimedia under Creative Commons License.

Religious institutions in Boise cater to every community's faith and belief, thus offering a place for their services and worshiping. This tour will guide you through the discovery of the most interesting religious spots, both of architectural and spiritual value.
How it works: Download the app "GPSmyCity: Walks in 1K+ Cities" from iTunes App Store or Google Play to your mobile phone or tablet. The app turns your mobile device into a personal tour guide and its built-in GPS navigation functions guide you from one tour stop to next. The app works offline, so no data plan is needed when traveling abroad.

First Presbyterian Church was established in 1894, becoming a vital part of the society and promoting the principle of help, friendship and respect among the city's community. The current building was designed in Free Gothic Revival style. The main mission is to bring God closer to the worshipers and to bring people closer to one another. The church serves the community through Presbyterian traditions and teachings, involving its members in the educational program and providing circumstances for them to feel valued.
Image by hoyasmeg on Flickr under Creative Commons License.
2

First Church of Christ, Scientist was inspired by the Mother Church in Boston and is based on the teachings of Jesus Christ, following the Bible through the interpretations of Christian Science, founded by Mary Baker Eddy. The church's building is quite modern and is made of brick, bringing out the minimalistic look while preserving the style of elongated windows and triangular roof. The main feature of Christian Science is the belief that there is a universal spiritual system available to people that worship different faiths and have diverse views. Thus the mission of the church is to improve the community's life through its services and beliefs.
Image by millicent_bystander on Flickr under Creative Commons License.
3

St Michael's Episcopal Cathedral was established on May 25, 1902 and has since been an important part of the spiritual, cultural and religious life of the city, thanks to its highly motivated community. The cathedral was built in English Gothic style, with walls made from local sandstone. The mission of the church is accomplished through biblical teachings, thinking and tradition, three important elements of the faith. The cathedral impresses with its English Gothic style building, considered a remarkable architectural landmark.
Image by kencf0618 on Flickr under Creative Commons License.
4

The Capitol City Christian Church, which is listed on the National Historical Registry, was established over 23 years, from 1887 to 1910, as the First Christian Church of the city. It is notable and famous for its unique and marvelous stained glass windows, Romanesque design and for its interior lay-out, known as the Akron Plan. The services and ceremonies are based on the Bible's teachings, the church's purpose being to worship God and bring the idea of God closer to the believers.
Image by Joseph Gray on Flickr under Creative Commons License.
5

5) Cathedral of St. John the Evangelist (must see)

St. John’s Cathedral was designed by one of the first architectural firms to work in Boise, Tourtellotte and Hummel. It is built in the Romanesque Revival style and the Cathedral of Mainz in Germany was the model for its design. The stone for the exterior is Boise Sandstone that was quarried just outside of the city at Tablerock. The building is cruciform in shape and measures 170 feet from front to back, 95 feet at the transepts and 65 feet in the nave.

Image by kencf0618 on Flickr under Creative Commons License.
Sight description based on wikipedia
6

Immanuel Lutheran Church, also known by its former name, Augustana Chapel, was designed by Charles F. Hummel I and consecrated on September 22, 1915. It is registered in the National Register of Historical Buildings, thanks to its architecture in genuine churchly Gothic style that is preserved in every detail of the establishment. For almost a century it has not changed and continues to spread the Gospel to the Lutheran Community of Boise.
Image by Boise Metro Chamber of Commerce on Flickr under Creative Commons License.
7

The present cathedral building was constructed 1958-1960 under the leadership of the Rev. Dr. Herbert E. Richards, and covers an entire city block. The stained glass is a notable and unique feature, depicting Biblical history as well as themes of the history of Christianity and aspects of American history including local references to Idaho and the city of Boise. The church is popular as a visitor destination, and attracts worshipers from all over America and the world. This is the third building to be used by the congregation. In about 1903-05, a new church was constructed at 10th and State streets. The new Cathedral of the Rockies structure was consecrated in December 1960, with a series of impressive ceremonies. In 2002 the structure was extensively expanded under the leadership of the present pastor, the Rev. Dr. Steve Tollefson. The ministries of the Cathedral of the Rockies are extensive, involving many services to the surrounding community. A full-time children's center and pre-school operates year-round.

Image by kencf0618 on Flickr under Creative Commons License.
Sight description based on wikipedia
8

First Baptist Church has a rich heritage measured not only by its architecture, but also by its spiritual and religious value, which helped many people to become closer to God and to be accepted. The beginnings of the church date from 1864, when the first religious service took place. In 1948 the church moved to its present building and was dedicated only in 1960. The church was designed in Georgian style, with a fine bell tower and steeple that can be seen from a big distance.
Image by james.thompson on Flickr under Creative Commons License.