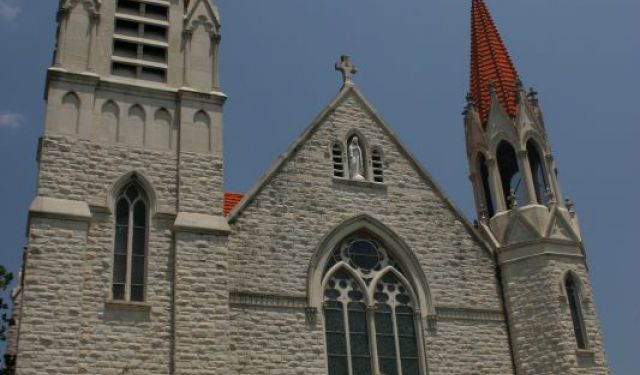 Image by NCBrian on Flickr under Creative Commons License.

The history of Jacksonville can be learned through stories of the foundations of numerous places of worship within the city. Their rich spiritual and architectural legacy continues to amaze locals and tourists alike. Take this self-guided walking tour to discover the most beautiful churches of Jacksonville.
How it works: Download the app "GPSmyCity: Walks in 1K+ Cities" from iTunes App Store or Google Play to your mobile phone or tablet. The app turns your mobile device into a personal tour guide and its built-in GPS navigation functions guide you from one tour stop to next. The app works offline, so no data plan is needed when traveling abroad.

The Mount Zion African Methodist Episcopal Church is another historic place of worship situated on East Beaver Street. The origins of this religious denomination date back to the end of the Civil War, when a group of Freedmen established a spiritual society, which in 1866 officially became known as Mount Zion AME Church. Throughout the years the building has been enlarged several times and in 1901 it suffered the same fate as numerous buildings in the city caused by The Great Fire of Jacksonville. The new large church was built here in 1905 in Romanesque architectural style featuring large decorated arched windows, a bell tower and contrasting brick quoins.
Image by Nichos on Wikimedia under Creative Commons License.
2

The small all-wooden St. John’s church built in 1842 was burned down during the Civil war. The construction of the new St. John’s Cathedral took four years and was completed in 1877 under the supervision of architect Edward Potter. The church suffered a lot of damage from the Great Fire of 1901 and had to be re-constructed and re-designed again. In 1951, St. John’s Church gained the new status of the Cathedral of the Episcopal Diocese of Florida. One of the oldest places of worship and the only Cathedral in Jacksonville, St. John’s is a fine example of Gothic Revival architectural style with a spacious interior decorated with wooden carvings and stained glass windows.
Image by Mgreason on Wikimedia under Creative Commons License.
3

Jacksonville’s First United Methodist Church was founded by John Jerry in 1823 who was known to have been travelling on horseback across Florida carrying his cloths, books and food, spreading the word of God and conducting religious services. The current structure of the church resembles the original neo-classical building that had a much smaller tower and lacked the Doric columns that add a special grandeur to the somewhat modest all-white building. First United Methodist Church has good musical traditions and invites young and old to visit its liturgical mass services.
Image by Stephanie Dodson on Flickr under Creative Commons License.
4

4) Church of the Immaculate Conception

The current building of Immaculate Conception Catholic Church was designed in 1905 by architect M. H. Hubbard. Construction began in 1907 and completed on December 8, 1910, when the building was dedicated. The structure is an example of Late Gothic Revival architecture, considered one of the best such examples in Florida, featuring a cruciform floor plan, pointed arches, tracery on the windows, buttresses and pinnacles, high spires, and a high vault on the interior.

The building's 178.5-foot (54.4 meters) steeple, topped by a gold-plated cross, was the highest point in the city for three years until the Heard National Bank Building was finished in 1913. In 1979 the church received solemn dedication, meaning the structure cannot be demolished willfully or converted to another purpose besides a church. On December 30, 1992 it was listed in the U.S. National Register of Historic Places.

Image by NCBrian on Flickr under Creative Commons License.
Sight description based on wikipedia
5

The oldest religious body in the city, the First Presbyterian Church was founded in 1840. At the beginning, the small congregation of Jacksonville gathered in private residences, but in 1844 with help from the retired sea captain O. Conger, a new building at Newnan Street was purchased. It was the congregation’s spiritual home until 1847 when additional donations from Conger allowed the foundations of the structure to be laid in 1847. In 1855 under the patronage of Miss Phoebe Swart, the church was remodeled and enlarged. During the American Civil War the church was used as a hospital. Today this beautiful Gothic church is a prominent landmark of Jacksonville. It is home to various spiritual community events.
Image by Carol Bailey on Flickr under Creative Commons License.
6

The church experienced a period of considerable growth in the mid-20th century, and now encompasses eleven square blocks of downtown Jacksonville. Several former pastors, including Homer G. Lindsay, Jr. and Jerry Vines, were widely influential in the Southern Baptist Convention, leading it in both growth and a shift towards conservatism and fundamentalist Christianity.

Image by HistoryForNovices on Flickr under Creative Commons License.
Sight description based on wikipedia
7

In 1872 the foundations were laid for a new church to serve the black community of Jacksonville. Rev. Brook G. White and Bishop John Freeman Young founded the mission with the help of St. John’s Church, which provided the new St. Philip's Episcopal Church with lay readers and priests. Throughout the years, the church underwent numerous modifications. The current structure was built in 1906 following the Gothic Revival traditions – the most appreciated architectural style of the turn of the century. Following its rich legacy, St. Phillip’s Episcopal Church continues to play an active role in the religious education of the vibrant Jacksonville community.
Image by D.B. Blas on Flickr under Creative Commons License.
8

Bethel Baptist Institutional Church was built in 1904 in a mixture of Greek Revival and Romanesque architectural style. As it was founded in 1838, this is the oldest Baptist congregation in Jacksonville. Among the first congregates there were numerous black slaves whose masters allowed them to attend religious services. The first Baptist church in Jacksonville, Bethel Baptist continued to be the spiritual home for interracial congregations until the end of the Civil War. Like many other buildings in the city, Bethel Baptist Church was severely damaged during the Great Fire of Jacksonville of 1901 and was reconstructed by New York architect M. H. Hubbard. This beautiful church’s complex has been added to the National Register of Historic Places in 1978.
Image by FotoKatolik on Flickr under Creative Commons License.