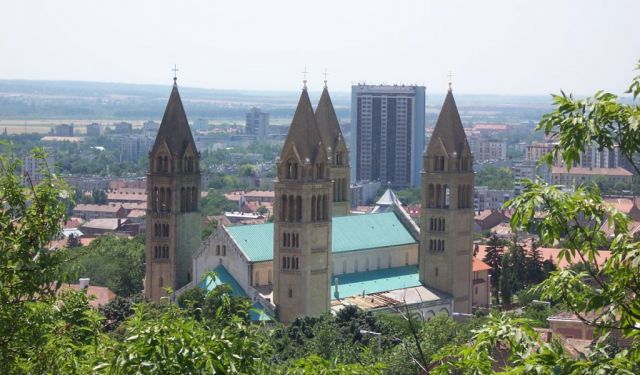 Image by Csörföly Dániel on Wikimedia under Creative Commons License.

Pecs is one of the largest cities in Hungary. It was founded in the second century by Romans and now it is the heart of the Roman Catholic Diocese of Pecs. The city experienced 150 years of Ottoman occupation. The Turkish religious heritage is represented by magnificent mosques. Visitors can notice the importance of religion in Pecs's history when admiring wonderful churches and chapels. Don't miss the chance to enjoy sophisticated architecture and the great history of Pecs's religious edifices!
How it works: Download the app "GPSmyCity: Walks in 1K+ Cities" from iTunes App Store or Google Play to your mobile phone or tablet. The app turns your mobile device into a personal tour guide and its built-in GPS navigation functions guide you from one tour stop to next. The app works offline, so no data plan is needed when traveling abroad.

The Pius Church or The Heart of Jesus Church was built between 1927 and 1930. The design of the church was realized by Gáspár Fábián. The Pius Church is a modern church architecture masterpieces. It raises above the street, buildings and trees. The walls of the church are white and because of it there is a strong feeling of space inside the building. The main altar of the church and the statue of Jesus are made from white marble. Orchestral and vocal concerts are held here regularly. If you visit the church during the liturgy you will see many university students among the parishioners.
Image by Csörföly Dániel on Wikimedia under Creative Commons License.
2

The St. Francis Xavier Church was built in 1739 by the Jesuits. The building is a single-nave Rococo-styled construction with the onion-dome tower. The only furniture element that remained from the previous building is the Rococo-style pulpit. The church was originally Roman Catholic, but now it is used by Orthodox Catholics. The church is named for St. Francis Xavier, the founder of the Jesuit order and the most significant missionary leader in the modern age. He proclaimed Christianity in the Far East, from India to Japan and was proclaimed the Saint Patron of India and the entire Far East by Pope Benedict XIV in 1748. St. Francis Xavier is the patron saint of the church missionary.
Image by Csörföly Dániel on Wikimedia under Creative Commons License.
3

The Pecs Cathedral was built in the eleventh century by Bishop St. Maurice. The building was destroyed and rebuilt several times during wars. It was used as a mosque and was embellished with a minaret (spire) during the Turkish invasion. The current exterior of Neo-Romanesque style was added to the main construction by the end of the nineteenth century. The interior look of the cathedral remained Gothic, with some baroque additions and furnishings. Inside the edifice you can find wonderful frescoes by 19th-century artists Károly Lotz and Bertalan Székely. Visitors to the cathedral may be surprised with organ concerts that are given throughout the year. The square in front of the cathedral and the beautiful park with a magnificent fountain is a popular gathering place. Various folk concerts, dances and fairs are held there also.
Image by Takkk on Wikimedia under Creative Commons License.
4

The Jakovali Hassan Mosque was built in the second half of the sixteenth century. The present mosque is the only mosque in Hungary that has remained intact with its minaret since the times of Turkish rule. Later, from 1702 to 1732, after the Turkish occupation, the mosque was remodeled into the chapel and named after Saint John of Nepomuk. The Pecs Bishop gave a Baroque look to the church from the outside and established a choir stand on the inside. In the 20th century the church was remodeled: the Baroque-styled architecture was demolished and the original floor level was restored. The original furniture of the mosque follows religious specifications and the Muslim community of Pecs uses the mosque regularly. The beautiful pulpit and the so-called preaching place are made of rosewood, and a special stand surrounded by a fence indicates the place for the women.
Image by Váradi Zsolt on Wikimedia under Creative Commons License.
5

5) The Franciscan Church (must see)

The Franciscan Church was first mentioned in the history of the town in 1280. The current church is eclectic and signs of its reconstruction from 1925 are also seen. The design of the church includes medieval and Baroque elements. The church was reconstructed and turned into a mosque during the Turkish occupation but later in 1720 it was returned to the Franciscans, who sold the roof of the mosque to cover the reconstruction. In spite of the several reconstructions that took place in the 1880s, 1890s and in 1925, the original Baroque tower was saved and is still a wonderful example of Baroque architecture. Visitors can find paintings by Ernő Gebauer on the facade and the "Taking of Saint Francis of Assisi" on the main altar.
Image by Csörföly Dániel on Wikimedia under Creative Commons License.
6

The current Serbian Orthodox Chapel building was turned from an apartment building into a church. The reconstruction was finished in 1949. Visitors can find a wonderful iconostas presented by the town of Szentendre. You can see the paintings that depict the twelve apostles and the prayer books printed in Russia in Slavonic language here. The Orthodox congregation is still active. The Orthodox Church is frequented by local Serbians and Greek students studying in Pecs. The Serbian Orthodox Chapel bears the name of Saint Simeon who chose the top of a pillar as the place of his seclusion. As time passed he moved higher and higher onto the columns.
Image by Testus on Wikimedia under Creative Commons License.
7

The Lutheran Church in Pecs, built in 1875, was designed by János Baldauf in early eclectic style. The building is situated in a lovely garden that highlights the location's peace and harmony. The wonderful chancel inside the Church houses a masterpiece of painting by Viktor Madarász. This work of art is called "Christ on the Mount of Olives."
Image by Dogsgomoo on Wikimedia under Creative Commons License.
8

The Church and the Hospital of the Hospitaller Brothers of St. John of God was constructed in 1727 by the Capuchin friars. The monastery was built later near the main church in 1731. The statue of the Virgin Mary by György Kis enriches the building. The altar with inlays describes the martyrdom of St. Sebastian in Italian Baroque art. Visitors to the church can find a beautiful square chapel on the western side of the church. In 1744 fire destroyed the wooden parts of the monastery. Later in 1796 a tanner from Pecs created a foundation for the creation of the Hospitaller hospital there. Then in the years 1940 and 1941 it was rebuilt using some parts from the old hospital building.
Image by Csörföly Dániel on Wikimedia under Creative Commons License.