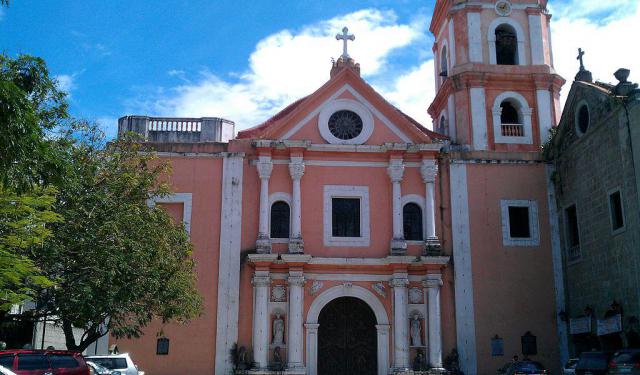 Image by alfonsoereve on Wikimedia under Creative Commons License.

Manila is a wonderful city. Part of its beauty consists of many glorious buildings. Religious buildings in Manila have a special way of attracting many visitors. Unique architecture, a delicate mixture of styles and exclusive interiors make these edifices shine in the sun and create an extremely attractive venue. We offer you a second chance to see many more stunning places of worship.
How it works: Download the app "GPSmyCity: Walks in 1K+ Cities" from iTunes App Store or Google Play to your mobile phone or tablet. The app turns your mobile device into a personal tour guide and its built-in GPS navigation functions guide you from one tour stop to next. The app works offline, so no data plan is needed when traveling abroad.

Despite its reputation and opulence, the Cathedral has had a very turbulent past. Although the Church has been on site since the early 16th century, the structure has changed several times over the years. The present, being the eighth reincarnated version of the original structure! The Cathedral was destroyed by earthquakes and terrible fires, but despite that, it has always managed to maintain that special possession not only in the city’s skyline, but also the hearts of the denizens.

With the Cathedral and the city having the same patroness, the Virgin Mary, the Metropolitan Cathedral Basilica is also the highest seat for the Archbishop of the country.

Image by Jun Acullador on Flickr under Creative Commons License.
2

Behind the wall of the Intramuros, the oldest walled city within Manila is one of the oldest surviving churches of the country. The San Agustin Church, built by the Spanish during their colonial reign, represents the city’s rich and vibrant past.

The San Agustin Church has come a long way since its inception in 1607. Initially built with bamboo and wood in the early 16th century, the structure was razed due to a fire and was reconstructed with wood, which also failed to survive. It was then that the Augustinians decided to build a solid structure made out of stone, with an adjacent monastery. Based on the design by architect, Juan Macías, construction started off in 1586. Although, the project started with zeal and enthusiasm, the same spirit was not seen with the inflow of funds. Construction took more than 2 decades and by the time it was complete, the Church lost its chief designer Macias.

Image by Anyo Niminus on Wikimedia under Creative Commons License.
3

Asilo de San Vicente de Paul of Hermanas de Caridad is a social service institute located on the United Nations Avenue opposite Pope Pius XXII center in Manila, the Philippines. This institute was built in the Spanish era and is presently run by the Congregation of the Mission. Inaugurated in 1885, the institute was donated to the Sisters of Charity by the founder Sor Asuncion Ventura, a native of Pampanga. Asuncion a part of the “noble” clan, established the 6 hectare institute using her inheritance. Asuncion spent her life teaching and serving the poor children. She was also the first Filipino to have founded an orphanage.

A marble stone at the institute commemorates its noble and great founder. This institute-cum-orphanage not only aims at uplifting the lifestyle of the poor children but also aims at empowering the youth and educating poor girls. The institute has a RENDU Home which basically caters to the street children aged below 12. The institute also has programs for young adults where they provide them with shelter along with supporting them through vocational training or tertiary education. A walk-in center known as Sagip Kabataan for street children is also provided at this institute.
Image by Shubert Ciencia on Flickr under Creative Commons License.
4

The Khalsa Diwan Temple is one of the Buddhist jewels of Manila. The temple has a little garden that impresses everyone passing by. Many people flock here to enjoy the fresh green grass and admire the wonderful building. The temple is not very big, but it is very popular. It is decorated with many different statues and images of Buddha.
Image by Wonderlane on Flickr under Creative Commons License.
5

The Paco Church also known as the San Fernando de Dilao Church in Manila,the Philippines was built in 1580.This parochial building was initially built with light material and was later replaced with a stronger material by Fr. Juan de Garrovillas. The Church has a history of undergoing several damages. However, it has always managed to inspire the locals and be rebuilt. In 1603 during the Chinese uprising, the Church was set on fire and had to be reconstructed. It was burnt again in 1762 during British invasion and a temporary structure was constructed in 1791 by Fr. Joaquin Segui as a replacement. In 1809, Fr. Bernardo dela Concepcion constructed a new stone church and in 1839 a bell tower was added to it by Fr. Miguel Richar.

The newly built church suffered heavy damages during the earthquakes of 1852 and 1880. Required repairs were made after the first earthquake but the church had to be rebuilt after the second one. Fr. Gilberto Martin started the reconstruction in 1881 but it was partly damaged by the typhoon. The construction was finally completed in 1896. However, this structure was ruined yet again in 1909 during the Filipino-American war and later the Belgian mission Fr. Raymundo Esquinet of Congregatio Immaculatie Cordis Mariae built a temporary church alongside the ruins of the earlier church. Fr. Godoferdo Aldenhuijsen built the present church in 1931 on the basis of the proposal given by Fr. Jose Billie. This church again suffered damages during the World War II but in 1948 all the required repairs were made. Having gone through such turmoil, this old church is now hosts a picture-perfect venue for small weddings.
Image by Ramon FVelasquez on Wikimedia under Creative Commons License.
6

Anthony's Church is a Catholic church situated in Manila. The building is more than 300 years old, and is designed in Roman style, with some Baroque and Muslim influences. The edifice is painted in light, delicate colors. Anthony's Church has a large, spacious interior and on Sundays it's filled with people, both locals and visitors, who go there to pray and enjoy the day together.
Image by Jonas Bengtsson on Flickr under Creative Commons License.
7

The Malate Church is one of the oldest churches in the city of Manila and is located outside the Intramuros. Built by Augustinian friars, the church is dedicated to Nuestra Senora de Remedios (Our Lady of Remedies) and is located close to Manila Bay. The statue of the Virgin Mary that stands at the altar of this Church was brought from Spain in 1624.

Due to its proximity to the water, Church was always prone to attack from pirates and was suffered severe damages on three separate occasions in its past. The earthquake of 1645 resulted in the Church being built again out of brick and stone. When the British attacked Manila in 1762, they took refuge in the Malate Church and successfully invaded the Intramuros. Damages incurred by the Church were attended to only after the British left the Philippines. Another earthquake and a typhoon in 1868, undid the previous restoration work on the Church and had to be built again. Finally, in 1950, the Columbian order restored the Church to its former glory.

Recently, this Baroque styled church has become a common destination for marriages in Manila. The Baywalk along Roxas Boulevard and the Liwasang Rajah Sulayman Park located nearby make this Church truly picturesque. A good number of restaurants are located near the Church for a quick lunch.
Image by ~MVI~ on Flickr under Creative Commons License.
8

While touring the city of Manila you will come across a large number churches and plazas. The majority of the population here is Catholic, which is very evident from the equally large number of churches in the city. However, the city has a fair of share of residents who follow other religions and Taoism is one of them. Scattered around the city are the Buddhist and Taoist temples, which gain prominence thanks to their architectural beauty. The Kim Guan Taoist temple is also called as the ‘Pearl of Taoist temples’.

On your visit to this Temple, you will find a differently styled roof for the structure. With its round corners, the roof rises towards the sky. The interiors of the Temple are colorful and intriguing and one can only marvel at the intricate work done. The idols inside the temple offer serenity to the visitors and you would definitely want to visit the Temple at least once again, before you leave Manila. Like any other temple, there is a special place for placing your offerings and burning the incense sticks. Also, a separate prayer room for devotees is located inside the Temple.

Located on Roxas Boulevard, the Kim Guan Taoist Temple is accessible by public transport and is situated closed to Malate Church, another site to visit, when in Manila.
Image by *CQ* on Flickr under Creative Commons License.