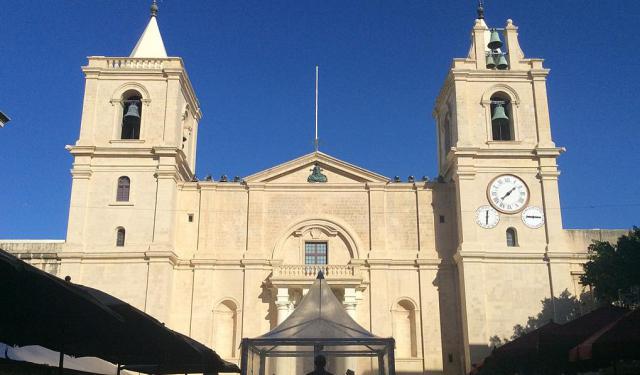 Image by Continentaleurope on Wikimedia under Creative Commons License.

Valletta has an amazing collection of religious buildings. Renowned for their architectural beauty and cultural value, they attract a huge number of tourists. Take this tour to see the best of these stunning masterpieces of craftsmanship, creativity and devotion.
How it works: Download the app "GPSmyCity: Walks in 1K+ Cities" from iTunes App Store or Google Play to your mobile phone or tablet. The app turns your mobile device into a personal tour guide and its built-in GPS navigation functions guide you from one tour stop to next. The app works offline, so no data plan is needed when traveling abroad.

1) Our Lady of Victories Church

Our Lady of Victories Church was the first church built in Valletta. The order of St. John laid the foundation stone for the new city here in March 1566. The church suffered some damage to the facade in 1752, but restoration of the building’s exterior and interior have been made most recently, in 2004.
Image by Andrew Girdwood on Flickr under Creative Commons License.
2

This church was built for the Italian followers of the Order of St. John, who were based in its vicinity. It was designed by Gerolamo Cassar in 1576 and was reconstructed in the seventeenth century.
Image by the-best-is-yet-to-come on Flickr under Creative Commons License.
3

St. Johns Co-Cathedral was built by the Knights of Malta between 1573-78, having been commissioned in 1572 by Grand Master Jean de la Cassière as the conventual church of the Order of the Knights Hospitaller of St John, known as the Knights of Malta. The Church was designed by the Maltese military architect Glormu Cassar who designed several of the more prominent buildings in Valletta.

The severe exterior of the Cathedral, built immediately after the ending of the Great Siege of 1565, is reminiscent of a military fort.

The interior, in sharp contrast with the facade, is extremely ornate and decorated in the height of the Baroque period. Preti designed the intricately carved stone walls and painted the vaulted ceiling and side altars with scenes from the life of St John. Interestingly, the figures painted into the ceiling next to each column initially appear to the viewer as 3-dimensional statues, but on closer inspection, we see that the artist cleverly created an illusion of 3-dimensionality by his use of shadows and placement. Also noteworthy is the fact that the carving was all undertaken in-place rather than being carved independently and then attached to the walls.

Tip:
Get there early! This is a very popular attraction and the groups and cruise ship passengers are already starting to descend by 10:30 or so.
Be sure and stop by at night if you visit during the day, and ideally check the schedule as the church also has various concerts throughout the year.
As a place of worship, please dress accordingly. Shoulders must be covered and high-heeled shoes are not permitted.


Image by Boguslaw Garbacz on Wikimedia under Creative Commons License.
Sight description based on wikipedia
5

St Francis of Assisi Church in Valletta is dedicated to St Francis of Assisi. It was initially built in 1607 but had to be rebuilt later because of the damage it suffered. The church is decorated with frescoes and paintings by famous artists and also has a statue of St Francis.
Image by Frank Vincentz under Creative Commons License.
6

St Augustine Church is one of the churches built during the creation of the new city of Valletta. The foundation stone was laid in 1571 according to the plan and guidance of Geralomo Cassar, architect of the Knights of St John.

A number of the artefacts found inside the church are originals from the first church. One of these is an important sixteenth century painting of the Augustinian Nicholas of Tolentino depicted by the famous artist Mattia Preti.

The church is renowned for the statue of St. Rita. Her feast is celebrated in May with a procession with her statue in the streets of Valletta.
Image by John Yavuz Can on Flickr under Creative Commons License.
Sight description based on wikipedia
7

Built in 1570, this church was severely damaged during the Second World War and re-built to compete successfully with its nearby Anglican rival. Fortunately, much of the contents of the original survived, including Maria de Dominici’s late 1670s Beato Franco, high up in the middle on your left. This marvelous building is often wrongly assumed to be a cathedral because of its huge 42-meter dome that can be seen from all over the city. Like other Maltese churches, its interior design is also impressive and one can observe the exquisite marble floor as well as the beauty of the huge oval dome construction from the inside.

Why You Should Visit:
You can't really grasp the size of the place until you get inside. Even for the non-religious, it's a good quiet spot to come and rest in between travels and enjoy some cool air.

Tip:
While at it you can also visit the Anglican cathedral across the road – a quite simple but also lovely church.