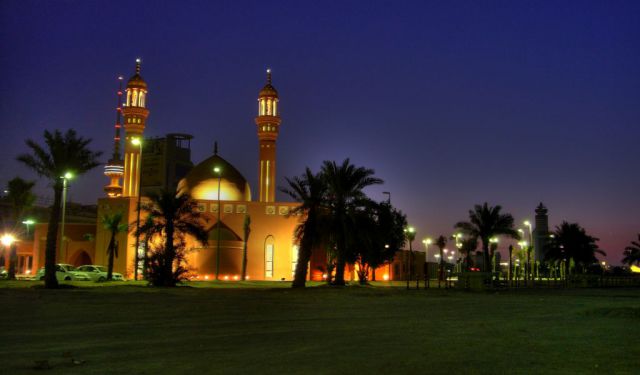 Image by Bashar Al-Ba'noon on Wikimedia under Creative Commons License.

There are many houses of worship in Kuwait City. There are beautiful mosques, shrines and even a Christian church, which is an unusual site in an Arab country. This self-guided tour will help you discover Kuwait City's places of worship.
How it works: Download the app "GPSmyCity: Walks in 1K+ Cities" from iTunes App Store or Google Play to your mobile phone or tablet. The app turns your mobile device into a personal tour guide and its built-in GPS navigation functions guide you from one tour stop to next. The app works offline, so no data plan is needed when traveling abroad.

Image by Kuwaitsoccer on Wikimedia under Creative Commons License.
Sight description based on wikipedia
2

It is unusual to see a Christian church in Kuwait, but there is one and it stands in a very prominent place. The Holy Family Cathedral is not far from Arabian Gulf Street. The cathedral was designed by an architect from Milan. It is a unique contemporary building that was erected in 1956.
Image by garysan97 on Flickr under Creative Commons License.
Sight description based on wikipedia
3

3) Mosque Near the Liberation Tower

There is a mosque near one of the most famous landmarks in Kuwait City, the Liberation Tower. It is a small white modern construction with a tower and a dome. The Liberation Tower is the symbol of Kuwait’s liberation from the Iraqi invasion. The tower is the tallest structure in the country.
Image by radiant guy on Flickr under Creative Commons License.
4

Abdullah Al Mubarak Mosque is a beautiful mosque built in a traditional Muslim style. It stands majestically at the roundabout in the central part of the city. It has two towers and a dome. At night it is illuminated and presents a particularly beautiful sight.
Image by Der hungrige Hunne on Wikimedia under Creative Commons License.
5

The Shia Shrine, in the center of Kuwait City, is located near Al Hamra Tower. Shia Muslims share fundamental beliefs with other Muslims, but recognize the authority of the Imams, the descendants of Muhammad.
Image by Farid al-Din on Wikimedia under Creative Commons License.

Kuwait City culture can be seen in its art and handicrafts. Many of the city’s museums and cultural centers are located on Gulf Road. The National Museum reflects the history and development of this wealthy country. There are also interesting museums set in houses displaying Bedouin art. Check out the most famous cultural spots in Kuwait City on this self-guided tour.

Kuwait City is a modern city that offers all kinds of shopping. There are modern shops and traditional souks, which are traditional Arab markets where patrons can bargain on many traditional goods, including rare spices. This self-guided tour will lead you through Kuwait City’s diverse shopping venues.