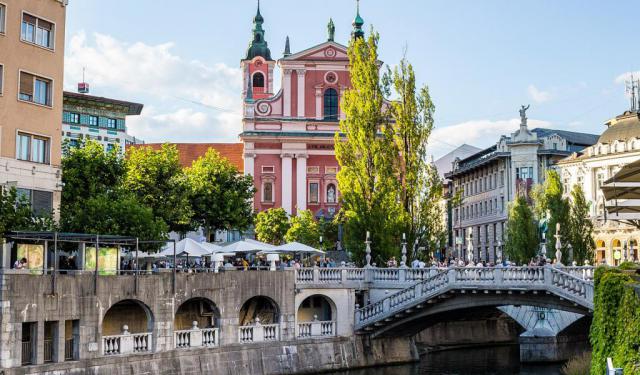 Ljubljana is a great religious center. It has Catholic, Orthodox, Baptist and Evangelical churches, the most remarkable of which being the Franciscan Church situated in the center of the city. Take this tour to discover the holy sights of Ljubljana.
How it works: Download the app "GPSmyCity: Walks in 1K+ Cities" from iTunes App Store or Google Play to your mobile phone or tablet. The app turns your mobile device into a personal tour guide and its built-in GPS navigation functions guide you from one tour stop to next. The app works offline, so no data plan is needed when traveling abroad.

The Evangelical Church was built in 1852 in a Neo-Romanesque style. At the time, it represented a very advanced form of architecture. On the inside, the church is lined with wood. Its organ dates back to 1878. The main altar features a painting by an unknown Austrian artist.
Image by hoyasmeg on Flickr under Creative Commons License.
2

The Church of St. Cyril and Methodius is a major temple of the Serbian Orthodox Church on the Slovenian territory, and is administrated by the Zagreb-Ljubljana Metropolis. It was built between 1935 and 1940 on the outskirts of Tivoli Park, in the immediate vicinity of the National Modern Art Gallery.
Image by PetarM on Wikimedia under Creative Commons License.
3

The Franciscan Church of the Annunciation (Slovene: Frančiškanska Cerkev Marijinega Oznanjenja or commonly Frančiškanska Cerkev) is located in Prešeren Square in Ljubljana. Built between 1646 and 1660 (the bell towers were added later), it replaced an older church on the same site. Its layout takes the form of an early-Baroque basilica with one nave and two rows of lateral chapels. The Baroque-style main altar was created by sculptor Francesco Robba. Much of the original frescos was ruined by cracks in the ceiling caused by the Ljubljana earthquake of 1895. The new frescos were painted by Slovene impressionist artist Matej Sternen.
Image by PetarM on Wikimedia under Creative Commons License.
Sight description based on wikipedia
4

The Ursuline Church of the Holy Trinity (Slovene: Cerkev Svete Trojice, Uršulinska Cerkev or Nunska Cerkev) is a Baroque-style church built between 1718 and 1726. It was designed by Carlo Martinuzzi, a Friulian architect, and is noted for its extensive altar made of African marble, designed by Francesco Robba, who also built the Fountain of the Three Rivers of Carniola, which stands in Town Square in Ljubljana. The original bell tower was destroyed in the Ljubljana earthquake of 1895. The current replica was built in the 1900s.
Image by Ziga on Wikimedia under Creative Commons License.
Sight description based on wikipedia
5

The Church of Our Lady of Mercy was rebuilt in 1714 and 1715, after being nearly completely destroyed. The rebuilt version was designed in a Baroque style by Venetian architect Domenico Rossi, to honor the local tradition. The main altar features the copy of a Madonna painting, made by Master Rothmayerja, the original of which was destroyed by fire in 1857.
Image by Ziga on Wikimedia under Creative Commons License.
6

The original Trnovska Church, also called St. John the Baptist Church, was built in 1753. It was then rebuilt in 1854-1857 in Neo-Historical style. Its current Neo-Romanesque image appeared in 1895, and is attributed to architect Raimund Jeblingerja. Inside the church is a beautiful altar painting of St. John the Baptist, made by Baroque artist V. Metzinger. In front of the church is a 20-meter wide Trnovo Bridge, designed as an extension of the church square.
Image by Ziga on Wikimedia under Creative Commons License.
7

St. Jacob's Church in Ljubljana is a Baroque-style church built between 1613 and 1615 on the site of an older Gothic church, erected in the early 15th century by the Augustinian Order. In 1598, the old church was acquired by the Jesuits and thus became the first Jesuit church in the Slovene lands, and one of the first in Inner Austria. Its interior was designed by Italian architect Francesco Robba and Slovene painter Luka Mislej. After the Ljubljana earthquake of 1895, the church was renovated by the Linz-based architect Raimund Jeblinger and the interiors were redone by Janez Šubic. Nevertheless, much of the original Baroque construction has remained intact.
Image by Ziga on Wikimedia under Creative Commons License.
Sight description based on wikipedia
8

St. Florian's Church is a Roman Catholic church in Ljubljana. It was built in 1267 by an unknown Roman Catholic Bishop. The church was destroyed in a fire in 1774, but was rebuilt shortly afterwards. Throughout its history, the building has changed many appearances, the last of which was given by architect Joze Plecnik in 1934. A statue of St. John of Nepomuk was also added back then.
Image by Ziga on Wikimedia under Creative Commons License.
9

Saint Nicholas' Cathedral, commonly referred to as the Cathedral of Saint Nicholas or Ljubljana Cathedral, is an easily recognizable landmark of the city with its green dome and twin towers. It is located in Cyril and Methodius Square, nearby the Ljubljana Central Market and the Ljubljana Town Hall. The site was originally occupied by an aisled Romanesque church, the oldest mention of which dates back to 1262. An extensive fire in 1361 resulted in the church being refurbished in Gothic style with further alterations added after the Diocese of Ljubljana was established in 1461. Other notable decorations in the cathedral include the altar angels by brothers Paolo and Giuseppe Groppelli on the right part of the nave (1711), and by Francesco Robba on the left (1745-1750).
Image by Ziga on Wikimedia under Creative Commons License.
Sight description based on wikipedia
10

St. Peter's Church (Slovene: Cerkev Sv. Petra or Šentpetrska Cerkev) is a Roman Catholic church, one of the oldest in Ljubljana, originally built in the Middle Ages, near the city walls. The current building dates back to 1730, when the old church was torn down and replaced with a mixture of Late Baroque and Neoclassical edifice by Italian architect Giovanni Fusconi. After the Ljubljana earthquake of 1895, the church was renovated in a Neo-Baroque style, which was strongly criticized for its supposedly low quality, and was followed by another, done between 1938 and 1940. The façade was completely remodeled by Slovenian architect Ivan Vurnik, while his wife Helena Vurnik added new interior decorations and mosaics.
Image by Ziga on Wikimedia under Creative Commons License.
Sight description based on wikipedia