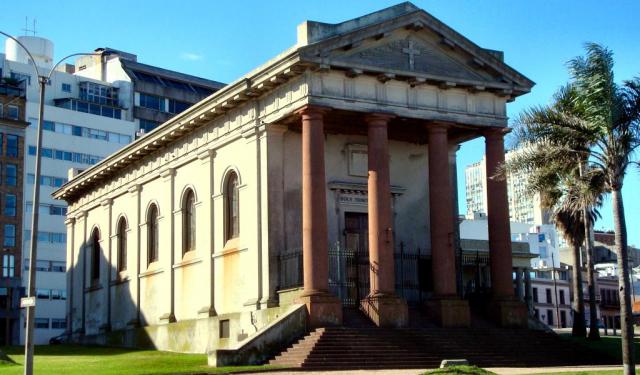 Image by Hoverfish on Wikimedia under Creative Commons License.

Religion in Uruguay is separate from the state. More than sixty percent are Roman Catholics and the rest are members of different religious groups. Montevideo has beautiful churches that represent different confections and different architectural elements from the periods during which they were built. Take this tour to discover the beauty of religious sites in Montevideo, Uruguay.
How it works: Download the app "GPSmyCity: Walks in 1K+ Cities" from iTunes App Store or Google Play to your mobile phone or tablet. The app turns your mobile device into a personal tour guide and its built-in GPS navigation functions guide you from one tour stop to next. The app works offline, so no data plan is needed when traveling abroad.

The architect of the Iglesia de San Francisco is Victor Rabu. He proposed the project of four chapels between the buttresses with rose windows and classical facades. It is a Catholic church that was, at that time, the highest point in the city, due to the church tower.
Image by .:elNico:. on Flickr under Creative Commons License.
2

The Metropolitan Cathedral represents the main Catholic Church in Montevideo. It dates back to 1740 and is located in Ciudad Vieja. It was consacrated in 1804. It has two clocks located in the towers at 40 meters high. In this church, Pope Juan Pablo II sustained a mass and two pieces of furniture made especially for him; they remained as a symbol of his presence.
Image by JohnSeb on Flickr under Creative Commons License.
3

By the 1840s, Samuel Fisher Lafone had the initiative to build the Templo Ingles in Montevideo, which was opened in the Cubo del Sur, opposite to where its replica stands today. The Anglican Church of Montevideo, whose foundation stone was laid on January 1, 1844, was the first Protestant church built in Latin America. The temple was demolished in 1934 due to the works of the South Esplanade, which erected a replica at the current location in 1936.
Image by pviojo on Flickr under Creative Commons License.
4

Central Cemeterio in Montevideo was opened in 1835. It represents a part of the history of the city. It has many important works of art such as sculptures and crosses. Many national heroes that have passed away are included in the history of the formation and development of the city and the country as a whole.
Image by David Paul Ohmer on Flickr under Creative Commons License.
5

Colegio de Sagrada Corazon Seminario was founded in 1880 next to the Iglesia de Sagrada Corazon. It has two functions, one as a Catholic school to secular students and another as a workshop. The college offers primary and secondary studies. It is open to this day since 2005 and has 1845 students. The rector of the college is Fr Alejandro Tilvet sj.
Image by Doncsecz on Wikimedia under Creative Commons License.
6

Iglesia y Convento de los Capuchinos, Paroquia San Antonio y Santa Clara is open since 1961. It also has a college for students to learn. With time, the dimensions of the college were extended to include a museum, a gallery, a swimming pool and baths in addition to the learning rooms, the dormitory and the study rooms.
Image by Editor B on Flickr under Creative Commons License.
7

7) The Methodist Church in Uruguay

Sagrada Familia, also called The Holly Family College and High School, is one of the oldest colleges in Montevideo. It has as its goal to educate, evangelize and encourage the maturing process of children. It was founded in 1889. It has a church, museum, theater, laboratory, gallery and lounge.
Image by fab4chiky on Flickr under Creative Commons License.
9

The Basilica Nuestra Senora del Carmen is built in neoclassic style. The architect is Emilio Turin, but it bears influences from different styles and architects. The facade, altar and towers were changed or rebuilt. In 1885, the last modification was done. In 2005, the Montevideo Archbishop announced the beginning of the process of beatification and canonization.
Image by Florin Chelaru on Flickr under Creative Commons License.