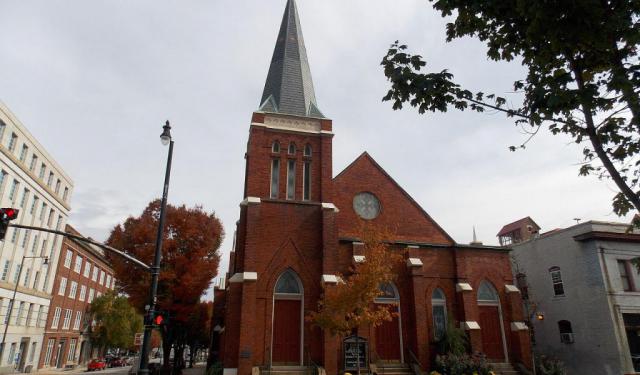 Raleigh is not only North Carolina's political, economic and cultural center, but also its spiritual center. Many beautiful and old churches are spread throughout the city, as the people of Raleigh strongly believe that knowing the churches of their ancestors can help them understand and know more about themselves. This tour will take you to Raleigh's most inspiring churches and perhaps even help you have a revelation.
Image Courtesy of Wikimedia and Farragutful.
How it works: Download the app "GPSmyCity: Walks in 1K+ Cities" from iTunes App Store or Google Play to your mobile phone or tablet. The app turns your mobile device into a personal tour guide and its built-in GPS navigation functions guide you from one tour stop to next. The app works offline, so no data plan is needed when traveling abroad.

The St. Paul A.M.E. Church is a historic American Gothic Revival style African Methodist Episcopal Church located in Raleigh. A red brick and frame structure built in 1884 by black masons, St. Paul's was the first independent congregation of African Americans in Raleigh and is the oldest African-American church in Wake County. Due to financial strains of its members, construction of the new St. Paul's Church took 25 years to complete. Many Southerners struggled in the essentially rural economy in the quarter century following the American Civil War. Because of earning lower wages in a segregated society, members of the congregation chose to live on bread and molasses to raise enough money to complete the church. In May 1901, the building was completed. The congregation marked the sanctuary’s completion with a joyous two-week revival. Governor Charles B. Aycock delivered a speech when the church finally opened.

Although the majority of the church had been built, construction on the spire did not take place for another eight years. In 1909 an accidental fire consumed most of the building, leaving only the brick walls. Donations from the white community as well as black resulted in reconstruction of the church, including addition of the long-planned spire. The church was listed on the National Register of Historic Places in November 1987 and is also a Raleigh Historic Landmark.

Image Courtesy of Wikimedia and Nicholas Oren Rawlings.
Sight description based on Wikipedia.
2

Edenton St. United Methodist Church was founded in 1811 after a conference of Methodist ministers in Raleigh under the leadership of Methodist Bishop Francis Asbury. Edenton has assisted the community throughout major national events such as the American Civil War, World War I, World War II, and the Great Depression. Edenton's third sanctuary was destroyed by a fire on July, 28, 1956, but that sanctuary was rebuilt. The fourth and current sanctuary of Edenton was first used on February 2, 1958. The Curtis Fellowship Center was completed in 2002. The Poindexter Memorial Building, which opened in 1937, stands between the sanctuary and the fellowship center. The Poindexter Memorial building contains classrooms, offices, a nursery, and the Joseph G. Brown Chapel. One of Edenton's first ministers, Rev. Melville B. Cox, left his appointment at Edenton in 1831 to serve as the first Methodist missionary to Africa.

Image Courtesy of Flickr and LBG Photography.
Sight description based on Wikipedia.
3

3) Cathedral of the Sacred Heart

Sacred Heart Cathedral serves as the Mother Church of the Roman Catholic Diocese of Raleigh and the throne of the current bishop of Raleigh. The cathedral is named after the Sacred Heart of Jesus and has a statue of Jesus Christ above its entrance. The cornerstone of Sacred Heart Church was laid in 1922 and the neo-gothic stone building dedicated in October 1924.

In December 1924, Sacred Heart Church became Sacred Heart Cathedral, the seat of the newly created Diocese of Raleigh, with the Most Reverend William Hafey of Baltimore as its first bishop. In 1939 the terazzo floors and the magnificent stained glass windows seen today were installed; later, marble altars and reredos were added.The interior of Sacred Heart Cathedral has undergone several renovations over the years, but in 1998 a sensitive and artistic restoration took place. Further improvements made in the following ten years returned the cathedral interior very nearly to its 1939 appearance.

Image Courtesy of Flickr and James Bradley.
Sight description based on Wikipedia.
4

4) Church of the Good Shepherd

All Saints Chapel of the Church of the Good Shepherd is a historic Episcopal chapel in southeastern Raleigh that is part of the Episcopal Free Church of the Good Shepherd. In the middle of the 19th century, there was only one Episcopal church in Raleigh. A disagreement between certain church members led to a desire for a split of the church. In 1873, the Reverend Edward R. Rich of St. Paul's Church in Clinton, North Carolina suggested that a new Episcopal Church in Raleigh be started. During the beginning of the 20th century the chapel moved from its original location to Morgan Street. In 2006, the church was moved again. The church is currently located right outside Historic Oakwood.
Image Courtesy of Flickr and Grace to You.
Sight description based on Wikipedia.
5

The First Presbyterian Church in Raleigh was organized in 1816 and was previously housed by Old North Carolina State House with an initial membership body of 40 people. Its founding is traditionally attributed to Reverend William McPheeter, who was called during his entire service "Pastor of the City". Built in the Romanesque architectural style, the red brick church is among the few surviving masterpieces of the style. The Church features a stately front bell tower, wide windows with golden elements and a wide area for worship and service.
Image Courtesy of Flickr and Robert English.
6

Standing at diagonal corners of Union Square in Raleigh there are two Baptist churches representing two different phases of the Gothic Revival style.

The very first Baptist Church on Wilmington Street was erected in the 1840s. After the Civil War, when African Americans still didn't have much say in church affairs, a debate arose as to whether the First Church should be split in two in a bid to better serve the needs of colored congregation.

By 1879, the property on Wilmington street was considered unsafe and had to be demolished. The lot was left vacant, except for the sturdy basement walls, which are now seen in the basement of the present day building. The area behind the auditorium of the Primary Department is the same wall of granite rock.

First Baptist Church, Colored purchased the Wilmington Street site in 1896, and in 1904 the cornerstone for the new Late Gothic Revival temple, which is currently in place, was laid.

In the 1910s the first pipe organ was added, and over the next few decades a number of modifications took place, including the lowering of the choir rostrum, adding two rooms and a baptistery, re-seating the auditorium with quartered oak pews, and the re-building of the church organ, which did not need to be replaced until 1974. Another major thing was the purchasing of a parsonage in the 1920s, followed by other renovations.
Image Courtesy of Flickr and Steve Coad.
7

Christ Church was among the first in town to be declared as a Raleigh Historic site. Currently a designated National Historic Landmark, the church has undergone serious restoration and decoration works in 1995 and impresses through its English countryside-inspired Gothic architectural style. The Church's initial design plan was completed with a garden setting and a bell tower, which carries a gilded weathercock at its peak, in the old English tradition. The warm tan of the stone used for the church's walls contrasts attractively with the gray stone used for the bell tower, which added in the 1990s three more bells to its diatonic ring of eight. Returned to its original appearance, Christ Church continues to delight all those who step over its threshold or simply walk by.
Image Courtesy of Flickr and Drew C..
8

Another jewel of the Moore Square Historic District, the Long View Center represents a rare combination of Gothic Revival and Romanesque architectural styles. Dating from 1881, the Center features its fabulous original sanctuary- Freedoms Hall. Freedoms displays 64 bright stained glass windows, natural acoustics, the bell tower and parlor. Because of its magnificent facilities, Long View is actively used for artistic performances and its also one of the city's special events venues, such as First Night Raleigh.
Image Courtesy of Wikimedia and Jmturner.