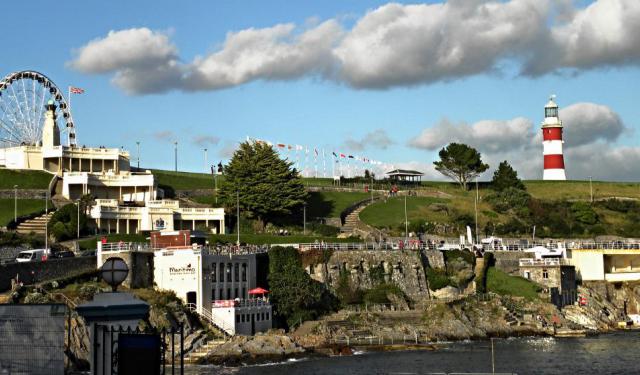 Image by Tom Parnell on Flickr under Creative Commons License.

Plymouth is home to Devon's largest church parish as well as the oldest synagogue in the English speaking countries. Credited with being the site of the first church built in Saxon times, Plymouth is a delight to discover for all lovers of religious architecture. Take a walk and enjoy the divine side of Plymouth!
How it works: Download the app "GPSmyCity: Walks in 1K+ Cities" from iTunes App Store or Google Play to your mobile phone or tablet. The app turns your mobile device into a personal tour guide and its built-in GPS navigation functions guide you from one tour stop to next. The app works offline, so no data plan is needed when traveling abroad.

This building, originally Eldad Chapel in Wyndham Square, was empty for over a decade when it was bought by Reverend Edward Godfrey in 1948 and re-opened that same year by his successor, Reverend George Rundle Prynne. It took several years and a great effort on behalf of the Reverend to give the Church a more attractive and pleasant look. During WWII, the building suffered great damage, but was restored and reconsecrated in 1956. In 2007, St. Peter's Church underwent subsequent redecoration and now boasts a more splendid interior.
Image by Joan Veale on Flickr under Creative Commons License.
2

2) Cathedral Church of St. Mary and St. Boniface (must see)

The Cathedral Church of Saint Mary and Saint Boniface is the seat of the Bishop of Plymouth and mother church of the Roman Catholic Diocese of Plymouth, which covers the counties of Cornwall, Devon and Dorset.

The Diocese of Plymouth was created in 1850, but it has a Pro-cathedral, Saint Mary. In 1858 the Cathedral was built merging the Church of Saint Mary and the Church of Saint Boniface. On February 20, 1856, William Vaughan from Bristol bought a portion of land on the town's outskirts. It cost £3,904: £1,000 from Mr Bastard and the remaining money was raised throughout the diocese and elsewhere in England. Joseph Hansom and Charles Hansom were the architects and local men from Stonehouse built it. Work commenced on June 22, during which a Royal Navy officer fired new Turkish Man-of-war guns in Plymouth Sound, which caused subsidence. The Cathedral was opened with Mass on March 25, 1858 (the Feast of the Annunciation), and consecrated by Bishop Vaughan on 22 September, 1880.

This Church of Christ the King was intended as an additional church for all the Roman Catholic parishes in Plymouth. The foundation stone was placed by the Roman Catholic Bishop of Plymouth, the Right Reverend Monseigneur Cyril Restieaux in September of 1961. Following that year, the Bishop blessed the Church and opened its doors for the local community. In 1988, Church of Christ the King became the official Catholic Chaplaincy for University of Plymouth students.
Image by Graham Hobbins on Flickr under Creative Commons License.
4

As was usual in British synagogues, there is a prayer board with the Hebrew prayer for the welfare of the Royal family. The prayer board at Plymouth dates from 1762. It was usual for the name of each new king to be painted over the names of previous monarchs. At present the names being prayed for are listed as King George V and Queen Mary.

Image by Nilfanion on Wikimedia under Creative Commons License.
Sight description based on wikipedia
5

5) The Minster Church Of St. Andrew (must see)

St Andrew's Church was designated as a Minster Church in 2009 and it continues to operate as the focus for religious civic events for the city and as a bustling evangelical church. It is likely to be on the site of the original Saxon church and was once attached to the abbey of Plympton. The church existed at least as early as the beginning of the 12th century, but by the 15th century it needed to be enlarged because of the growth of the town.

The building can be dated approximately as between 1430 and 1490. It has been restored three times, in 1824 by John Foulston, in 1875 by Sir George Gilbert Scott, and by Sir Frederick Etchells after extensive bomb damage in World War II. The Resurgam Door is a commemoration of this. The length is 185 feet (56 m) and the width 96 feet (29 m). There are two aisles on each side of the nave and one each side of the chancel. The arcades are of the type which is standard in Cornwall at the period. The tower is 136 feet (41 m) high and was funded by Thomas Yogge, a prosperous merchant.
Image by Robert Cutts on Flickr under Creative Commons License.
Sight description based on wikipedia
6

The church of St. John is built of local stone by architect Mr. Benjamin Ferrey and was consecrated in June of 1855. In 1883, an additional Lady Chapel was constructed on the north side, as a memorial to the son of a local patron. The interior of the Church is in the English style, while the window on the southwest was moved here from the Church of St. Alban of Crownhill in 1979. On the south side there used to be a monument for those fallen in the Great War, which was destroyed by enemy action in 1941.
Image by Scattynobrain on Flickr under Creative Commons License.
7

This parish was formed based on the one of Charles, in May of 1877. The church, made in Early English style, was designed by Plymouth architect, Mr. James Hine. As it was the celebration of Her Majesty Queen Victoria's Jubilee, it was decided that a lady should lay the foundation stone, and thus, Miss Catherine Bewes, niece of Reverend Bewes, was invited to perform this festive task. This church officially opened its doors to worshippers in November of 1906.
Image by Tim Jenkinson on Flickr under Creative Commons License.
8

The foundation of the Salisbury Road Baptist Chapel was officially laid by the Mayor of Plymouth, Mr. John Yeo in December of 1905. The finished church, made out of limestone by architect Mr. Frederick A. Wilblin of Plymouth, was opened on January 21, 1907. During the Great War, this building served as a military hospital. The Chapel was partially destroyed during the night of Whit-Sunday, June 14, 1943 but was restored and re-opened in January 1952 as a Sunday School. Salisbury Road Baptist Chapel was finally opened again in 1958.
Image by Rob Milsom on Flickr under Creative Commons License.
9

St. Simon's Church was founded in 1905 by the Archbishop of Canterbury, the Most Reverend Randall Thomas Davidson. The design of the church was entrusted to Mr. Harbottle Reed and was built to host up to 750 worshippers. The facade of the St. Simon's Church, made from local limestone, and interior, made from purple-grey Dulverton stone, are included in the Plymouth architectural heritage.
Image by Mick Lobb on Wikimedia under Creative Commons License.