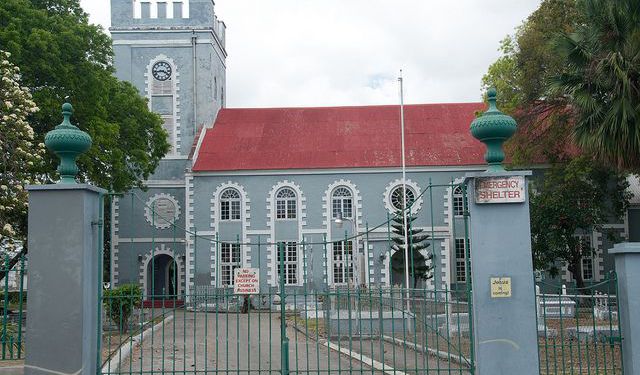 Image by randystoreyphotography on Flickr under Creative Commons License.

Bridgetown, the capital of the island of Barbados, unites various denominations within its perimeter. This is a result of Barbados’ past, which involved the island’s fall into the British colony net. Today, the most dominant denomination is the Anglican one, with quite a number of churches. Take this tour to find out more about religion in Bridgetown and its evolution.
How it works: Download the app "GPSmyCity: Walks in 1K+ Cities" from iTunes App Store or Google Play to your mobile phone or tablet. The app turns your mobile device into a personal tour guide and its built-in GPS navigation functions guide you from one tour stop to next. The app works offline, so no data plan is needed when traveling abroad.

St. Mary's Anglican Church is a wonderful church, considered to be one of the oldest in Bridgetown. Works upon this brick construction finished in 1825, and two years later it was consecrated. It is a church with an elaborate schedule, given the times of services; one can join the Holy Mass each day, except Mondays and Saturdays. It is hard not to notice the church, because its yard -- rather unique in Bridgetown.
Image by Postdlf on Wikimedia under Creative Commons License.
2

Built in 1654, it was destroyed by a hurricane in 1831, was rebuilt, fell into disrepair until it was sold in 1929. Haim Isaac Carigal was in Barbados, perhaps acting as rabbi of the congregation, at the time of his death in 1777. About 300 Jewish people of Recife, Brazil, persecuted by the Portuguese, settled in Barbados in the 1660s. Skilled in the sugar industry, they quickly introduced the sugarcane crop and passed on their skills in cultivation and production to the Barbados land owners. With their help, Barbados went on to become one of the world's major sugar producers and one of the richest European territories in the West Indies. The Nidhe Israel Museum was opened in 2008.

Image by Charlie Dave on Flickr under Creative Commons License.
Sight description based on wikipedia
4

The Bethel Methodist Church is a part of the Methodist Church in the Carribbean and the Americas. In 1789, the Methodists came to Barbados with the aim to convert the oppressed slaves to Christianity. Unfortunately, the plantocracy saw Methodism as a threat to their ways, so they went against it. At the present day, there are some Methodist churches left - Bethel Church is one of them.
Image by Paul Morrison on Flickr under Creative Commons License.
5

St. Patrick's Catholic Church is an active place of worship that seeks to share the love of God with all believers. It performs numerous services during the week, where people gather to offer prayers to God. The church plays an important role in Bridgetown’s social life, helping out children from poor families and performing other charity deeds. One will find the church’s building quite beautiful, from an architectural point of view, and its history entertaining.
Image by ben.ramirez on Flickr under Creative Commons License.