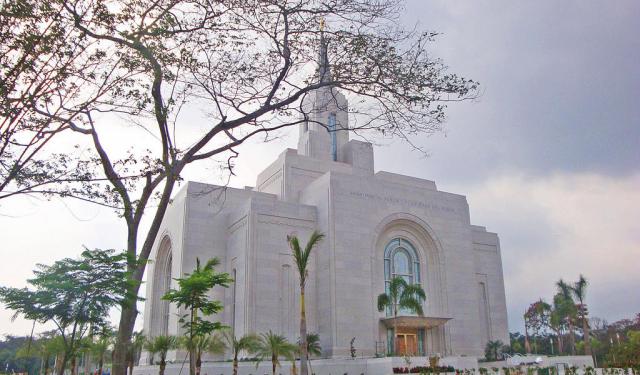 San Salvador’s religious buildings play an important role in the social, religious, architectural, historical and cultural life of the city. They tell history through the churches' appearances and convey the influences that contributed to their construction. This tour will help you better understand the role of churches for people of San Salvador.
Image Courtesy of fsandovalsud.
How it works: Download the app "GPSmyCity: Walks in 1K+ Cities" from iTunes App Store or Google Play to your mobile phone or tablet. The app turns your mobile device into a personal tour guide and its built-in GPS navigation functions guide you from one tour stop to next. The app works offline, so no data plan is needed when traveling abroad.

Basilica Sagrado Corazon dates from the last century. It is known as the most beautiful religious building in the country. Construction materials used were wood and metal because they were very popular during that period. The church's construction took two decades. It sustained five earthquakes from the time of its construction until 2001, and due to that it was restored several times. In 1989 it was the main church in the city because the main cathedral was in a period of reconstruction at that time.
Image Courtesy of Wikimedia and Efegé.
2

Iglesia El Calvario dates from the seventeenth century when it measured 16 yards and was built from metal and lime. Its location was considered the edge of town at that time. In 1854 was destroyed in a earthquake and later restored. The main material used during the restoration was wood which was consumed by a fire in 1908. After a period of time a real church was constructed, beautiful and concrete, that was built by known architects from Italy and Spain in Gothic style. It is an important model of churches in San Salvador due to its beauty and importance in the development of church architecture.
Image Courtesy of Wikimedia and Rafael Duran.
3

Iglesia Catolica de Nuestra Senora de Candelaria was built in 1816 and has an area of 580 square meters around it. It took its style from Europe. The exterior columns on the front part of the church have a Greek style and represent some elements of the Corinthian style from 550 BC. The interior is simple, dedicated to Virgins of the Catholic Church. The facade has a classic bronze lamp and a tower of 18 meters. Now it is a symbol of legacy of the area's ancestors.
Image Courtesy of Flickr and iconfiteor.
4

Image Courtesy of Flickr and a tree is nice.
Sight description based on Wikipedia.
5

Iglesia El Rosario was finished in 1971. Though it is located very close to the city's main cathedral, this church is worth a visit due to its uniqueness and beauty. The architect of this church is Ruben Martinez, who is from El Salvador. One of the most attractive points of the architecture of this church are its windows and interior lights that create a special atmosphere of peace and silence for praying and meditation. It is one of the last churches built in El Salvador that has elements of the European style. Another interesting element of the church is the iron sculpture of Christ on the cross at the altar.
Image Courtesy of Flickr and Randal Sheppard.
6

Iglesia Cuerpo Del Cristo En El Salvador is a church that transmits and reveals the Gods wishes and sayings through the Holy Spirit and the words that are very important and semnificative for the population. The central church was established in 2001 but required its legal status in 1995. It represents also a congregation of Hispanic churches of this kind. The Lord Jesus words are taken very seriously because it represents the witness of God.
Image Courtesy of Flickr and chb1848.
7

Iglesia San Francisco De Asis is a beautiful church considered that used hundred of kilos of gold in building the altar. It has a beautiful design unique with engravings of animals and flowers with some baroque elements. It is dedicated to a man who made a cult of poverty and austerity. The exterior is considered not as attractive as the interior is, with beautiful interior decorations. The work of this church began in 1781. Previously, in the location of this church was another with the name of Our Lady Queen of Angels.
Image Courtesy of Flickr and Amanda Slater.
8

Iglesia Maria Auxiliadora was opened in 1953, and it has a tower with the tallest structure in the capital. On the tower are arranged a cross with Christ and four big clocks. The church organizes some social and spiritual events for many homeless and hungry people that come here to eat and sleep. The local people also call the church “Iglesia Don Rua”. It is the first building built by Salesians in the place where a seminary with the name “International Institute Don Rua” was. The style of the church is Roman with a garden and high walls. The church also has a church near it that helps more than 300 people.
Image Courtesy of Wikimedia and Efegé.