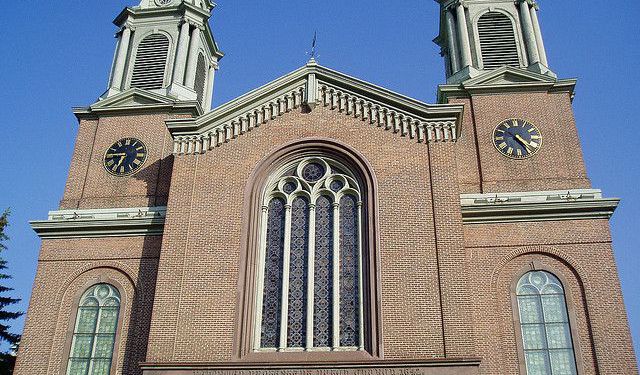 Image by Joelk75 on Flickr under Creative Commons License.

Albany is a city with several wonderful places of worship that bring the history of faith in the United States into sharp focus. You will visit beautiful churches such as St Peter's Episcopal Church and others. Take our tour to see the key places of worship in Albany.
How it works: Download the app "GPSmyCity: Walks in 1K+ Cities" from iTunes App Store or Google Play to your mobile phone or tablet. The app turns your mobile device into a personal tour guide and its built-in GPS navigation functions guide you from one tour stop to next. The app works offline, so no data plan is needed when traveling abroad.

1) Cathedral of the Immaculate Conception

Mother church of the Diocese of Albany, the Cathedral of the Immaculate Conception is a Roman Catholic cathedral founded in 1852 and designed in Gothic style. In 1976 it was listed on the National Register of Historic Places. Designed by Irish American architect Patrick Keely to accommodate Albany's growing population of Catholic immigrants, it is the second-oldest cathedral in the state, after St. Patrick's Cathedral in New York City. It is also the third oldest Catholic cathedral in the United States, and the first American Catholic cathedral in the Neo-Gothic architectural style. It has two tower spires, which are considered to be a symbol of New York's capital city. Interestingly, they were built at different times: the north one in 1862, the south one in 1888. In 1862, one of the bishops of the cathedral blessed its bells. Inside the cathedral is a crypt that contains six coffins of Howard Hubbard's predecessors. The cathedral was renovated in May 2010 and now is in much better condition.
Image by albany_tim on Flickr under Creative Commons License.
Sight description based on wikipedia
2

St. Peter's Episcopal Church, also known as St. Peter's Church has had 3 buildings throughout its history. The first was built in 1715-17 and opened to the public by Reverend Thomas Barclay; it was the first Anglican church in New York west of the Hudson River, and north of the city of New York. In 1731 the church was damaged by a fire and a second church was finished in 1803. The third and current church was built in 1860, designed by Richard Upjohn and his son Richard M. Upjohn. The remains of Lord Howe are interred under the vestibule; he is the only British Lord buried in the United States.

The church itself has walls of Schenectady bluestone with trim of New Jersey sandstone. A 20-foot (6.1 m) square tower rises from the southeast corner, with a narrow 180-foot (55 m) octagonal tower on its own southeast carrying a spiral staircase. Decoration on the facades is French Gothic in character. The church's interior is finished in black walnut and includes some original Clayton & Bell stained glass windows and sculpture by Louis Saint-Gaudens. It has a mosaic floor decorated in various religious motifs.
Holy Communion is offered on Sunday and Wednesday mornings. A later Sunday service alternates each week between Communion and Morning Prayer. Sunday school is also held at the same time.

Image by Cg-realms on Wikimedia under Creative Commons License.
Sight description based on wikipedia
3

St. Mary's traces its heritage to the earliest days of Catholic missionary work in the New World. After formally becoming a church late in the 18th century, it went through two buildings in the 19th century to accommodate a population swelled by immigration before the construction of the current building. Built in 1867, it is the third church to house the oldest Catholic congregation not only in the city but in all of upstate New York. In 1977 it was listed on the National Register of Historic Places; it is also a contributing property to the Downtown Albany Historic District, listed on the Register several years later.

The church is a two-and-a-half-story, three-by-six-bay brick structure built in an Italian Romanesque Revival style, with marble trim on a cut bluestone foundation, gradually exposed towards the rear by the slope of the underlying land. The middle bay on the west (front) facade projects slightly, forming the lower stages of the 175-foot (53 m) bell tower. The top of church's bell-tower features an angel of judgment. Atop the main block is a steeply pitched gabled roof. A five-section semicircular apse is attached to the rear. The church's interior is done in a combination of the Mannerist and French Gothic styles, in contrast to its exterior. Upon completion of the tower in 1894, the church was wired, making it the first church in Albany to have electric lighting. In 1912 the original stained glass windows were replaced. Saints depicted on windows and also sculptures of pastors and different saints can be seen inside the church. Above the altar there is a high dome, decorated with different religious pictures.

Image by UpstateNYer on Wikimedia under Creative Commons License.
Sight description based on wikipedia
4

First Reformed Church in Albany was designed by Philip Hooker and built in 1798. It is a member of the Reformed Church in America and was listed on the National Register of Historic Places in 1974. The congregation of the First Church in Albany is the second oldest congregation in the state of New York. It was established in 1642 to serve the Dutch inhabitants of Fort Orange, the adjacent village of Beverwyck, and the patronship of Rensselaerswyck in general.

The current church is the fourth building. The pulpit was imported from the Netherlands in 1656 and is the oldest pulpit in the United States. Shortly after being constructed a memorial service was held for Alexander Hamilton here. The name North Dutch Church came about when the Second Reformed Church was built in 1806 and called the South Church. Theodore Roosevelt attended services here while Governor. The First Church has many notable artifacts, including the oldest pulpit and weathercock in the United States, both from 1656. The church also has a large collection of colonial silver and archival records from the 18th century to today.

Image by UpstateNYer on Wikimedia under Creative Commons License.
Sight description based on wikipedia
5

St. Joseph's Church is a historic Gothic church in the Ten Broeck Triangle section of Albany. The current structure is the second to hold this name in Albany, the first structure was the third Roman Catholic church built in the city.
The current structure is considered a city landmark and an important part of the skyline. The church is 14,000 square feet, 212 feet long, 116 feet wide, and built of blue limestone trimmed with Ohio sandstone. It incorporates 14 marble columns and 16 stained glass windows. There are three towers on the church, one large tower in front and two smaller twins in back. The main tower is 235 feet tall, is lit at night, and houses 10 bells. The ceiling is in a hammerbeam roof–style of wooden beams projecting from the roof and walls carved ornately with angels and religious symbols. The church continued to deteriorate from lack of use and maintenance and was included on the Historic Albany Foundations's Seven to Save list of endangered historical sites in 2000. When the city determined that the structure was in imminent danger of collapse during the winter of 2001, the church was condemned and emergency work done to shore up the support columns and roof. In 1987 the church was the site of some scenes filmed for the movie Ironweed starring Jack Nicholson and Meryl Streep.
Image by echiner1 on Flickr under Creative Commons License.
Sight description based on wikipedia
6

6) Cathedral of All Saints

The Cathedral of All Saints is the central church of the Episcopal See and the seat of the Episcopal Bishop of Albany. It was the first Cathedral church in the Episcopal Church in the United States of America to be built expressly and for that reason, it is also called the Pioneer Cathedral.
It is built in the Gothic style of architecture, and remains incomplete, although dedicated in 1888. It is in the Downtown Albany Historic District and is on several registers of historic properties. Bishop William Croswell Doane's major project, for many years, was the building of the Cathedral of All Saints, his major legacy. The Cathedral is noted as a tourist destination for its Gothic architecture, and especially for its multicolored stained glass windows, stone carvings, and 17th century Belgian Choir stalls. The Cathedral is famous for its music program, and is affiliated with the American Guild of Organists and the Royal School of Church Music in America. The Cathedral is also a concert venue for both secular and religious music.
Image by UpstateNYer on Wikimedia under Creative Commons License.
Sight description based on wikipedia
7

The Westminster Presbyterian Church was established in early 1817. The present site was raised in 1919. The church was designed in Gothic Revival style. Westminster is one of Albany's many heritage sites. The church is also one the most "musical" churches in town, and has been since the 1930s, with an outstandingly talented choir and a modern organ among its assets.
Image by joiseyshowaa on Flickr under Creative Commons License.
8

The Emmanuel Baptist Church was founded in 1810. The present church was raised in 1869, taking the Emmanuel name only in February 1871. It was designed in Gothic Revival style. The church is highly visible due its gabled, square-shaped bell-tower, decorating the southwest corner of the church.
Image by Klearchos Kapoutsis on Flickr under Creative Commons License.

Create Your Own Walk in Albany

Creating your own self-guided walk in Albany is easy and fun. Choose the city attractions that you want to see and a walk route map will be created just for you. You can even set your hotel as the start point of the walk.

Albany is a small city, but with many notably beautiful and interesting places to discover. This tour you will guide you to the most famous places in Albany, where you can learn more about the United States' history, politics, economics, arts and culture.

Albany is a rather small city, but you can still find several interesting places to shop. If you are looking for a gift, a souvenir or maybe for a beautiful painting, take this tour to discover the perfect shopping spot for your tastes!

Albany is a city with a variety of cultural places such as museums and galleries. Visits to some of the city's interesting places, like the New York State Museum and Albany Institute of History & Art, should be part of your travel plans. Take our tour to find the best places and learn more about Albany!