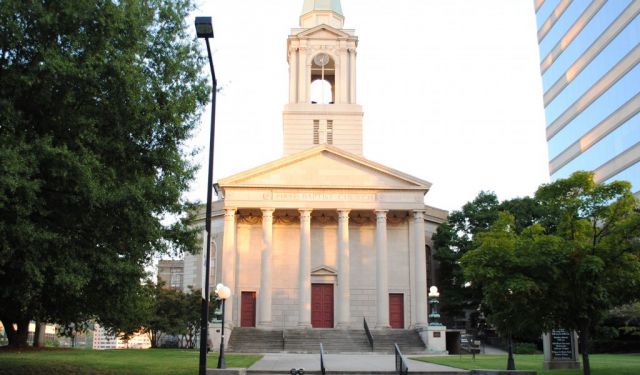 Knoxville is home to over 450 churches of many religious denominations. Situated at the core of the Bible Belt, many of them are Protestant. The following tour highlights the city’s most impressive religious sites, including Knoxville’s oldest church and other historically significant ones.
Image Courtesy of Flickr and Deidre Woollard.
How it works: Download the app "GPSmyCity: Walks in 1K+ Cities" from iTunes App Store or Google Play to your mobile phone or tablet. The app turns your mobile device into a personal tour guide and its built-in GPS navigation functions guide you from one tour stop to next. The app works offline, so no data plan is needed when traveling abroad.

In 1891, the original building was razed to make room for a larger facility, which was completed in 1892. The architect for the current building was J.W. Yost of Columbus, Ohio. The stone church is built in a Latin cross form, but the nave, transepts, and apse are minimal in size compared to the crossing, resulting in a large central space. The architectural style is Richardsonian Romanesque. Features include a slate roof, turrets, buttresses, and rose windows.

A devastating fire in the church in 1919 destroyed many of the original stained glass windows, but the building was promptly restored. In 1963, extensive renovation created the undercroft under the nave floor. In 1986, St. John’s was designated as the seat of the bishop for the newly created Diocese of East Tennessee.

Adjacent to St. John's Episcopal Cathedral is the church office. This two-story, brick, classical building was erected in 1857 by O. F. Hill to serve as both, home and office. The original porch had Tuscan columns and extended the full width of the house; it was eventually removed. The present porch is comparatively modest. The house faces the James Park House across Cumberland Avenue to the south.

Image Courtesy of Wikimedia and Brian Stansberry.
Sight description based on Wikipedia.
2

2) First Presbyterian Church and Its Cemetery

The First Presbyterian congregation was organized by the Reverend Samuel Carrick in the 1790s, and the first church adjacent to the cemetery was erected in 1816. Shortly after the church's completion, disputes arose over several matters, such as the renting of pews and a doctrinal dispute between "Old Calvinists" and "Hopkinsians". As a result, a portion of the congregation split from First Presbyterian and founded Second Presbyterian Church circa 1818.

The present First Presbyterian Church, constructed in 1903, is a Neoclassical building with a Tiffany-style stained glass window.

The First Presbyterian's Graveyard is the oldest burial ground in Knoxville. Established in the 1790s, it contains the graves of some of Knoxville's most prominent early residents, including territorial governor and Constitutional Convention delegate William Blount and Knoxville founder James White.

In 1838, hundreds of Knoxvillians died when an unknown illness (possibly, malaria) swept through the town. Approximately one-tenth of the marked graves in the graveyard are dated "1838"— more than any other single year — and one tombstone mentions "the fever." The graveyard remained open to new burials until 1857, but the last burial took place here in 1879. During the Civil War, Confederate soldiers (who occupied the town in 1861–1863) kept horses in the cemetery, and Union soldiers (who occupied it in 1863–1865) used the church as a hospital and barracks.

In the 1870s, the graveyard had an indirect effect on the career of future newspaper publisher, Adolph Ochs. Then a young teenager working after hours as a "printer's devil" for the Knoxville Chronicle, Ochs feared walking past the graveyard at night, as many locals believed it was haunted. Rather than leave work after his shift (which ended close to midnight), Ochs stayed until daylight, spending the extra time learning the typesetting and printing trades.

In 1996, the graveyard was added to the National Register of Historic Places.
Image Courtesy of Wikimedia and Brian Stansberry.
Sight description based on Wikipedia.
3

The Roman Catholic Church of the Immaculate Conception is a historic church at Summit Hill in Knoxville.

Knoxville was home to a small Roman Catholic congregation by the early 1800s. Father Stephen Badin traveled to the city on several occasions to visit this congregation. Railroad construction in the late 1840s and early 1850s brought scores of Irish immigrant laborers to the city, considerably boosting the congregation's numbers. The Church of the Immaculate Conception, the city's first Roman Catholic parish, was founded in 1855 on the site of the current church. The name of the church was inspired by Pope Pius IX's elevation of Immaculate Conception to official church doctrine the previous year.

Father Abram Joseph Ryan (1836–1886), the Poet-Priest of the Confederacy, was once a priest at this parish. He was the author of the Requiem of the Lost Cause, The Conquered Banner, written soon after the surrender at Appomattox.

The existing church sanctuary was constructed in 1886, in front of the earlier building. The brick church was designed by Joseph Baumann, who along with George Franklin Barber was one of Knoxville's first major professional architects. The church was designed in the Victorian Gothic style of architecture. The sanctuary is two stories tall, with a central clock tower in a turreted spire.

The church remains a Roman Catholic parish in the downtown portion of the city. However, Sacred Heart Cathedral in the west Knoxville community of Bearden is the seat of the Roman Catholic Bishop.
Image Courtesy of Wikimedia and Brian Stansberry.
Sight description based on Wikipedia.
4

St. John's Lutheran Church is a historic Lutheran church located in Knoxville. The church building is listed on the National Register of Historic Places, both individually and as a contributing property in the Emory Place Historic District.

The St. John's congregation was formed in 1888. It was the first English-language Lutheran congregation in Knoxville. The founding members were Lutherans of German heritage who preferred English over German, which was then used in other local Lutheran churches. Initially, they met for worship in the First German Evangelical Lutheran Church in downtown Knoxville. In 1889, the group leased the former the Broad Street Methodist Episcopal Church building, on the corner of Broadway and Fifth Avenue, for worship use. In 1890, the congregation incorporated, affiliated with the United Synod of the Evangelical Lutheran Church in the South, and purchased the former Broad Street Methodist property.

R. F. Graf was the architect of the Gothic Revival style building. Gothic elements in the building include arches at windows and doorways, exterior buttresses, and tracery. The church's interior utilizes quarter sawn oak. Hammerbeam trusses vault the sanctuary, rising to almost 40 feet (12 m). The sanctuary is surrounded by 61 stained glass windows, including a series of nine pictorial windows that depict scenes from the Bible in chronological sequence. The windows were designed by Von Gerichten Art Glass of Cincinnati and assembled onsite during building construction.
Image Courtesy of Wikimedia and Brian Stansberry.
Sight description based on Wikipedia.
5

Central United Methodist Church is located on East Third Avenue in Knoxville. On November 9, 2005, it was added to the National Register of Historic Places, and is listed as a contributing property within the Fourth and Gill Historic District.

The church was organized in 1924 as a merger between Broad Street Methodist and Centenary Methodist churches after a fire destroyed the Broad Street building. The present structure was completed in 1927 in the Gothic Revival style. Baumann & Baumann of Knoxville were the architects. The exterior of the church is primarily brick, but also includes stone, limestone and marble. At the time of its completion, the sanctuary was Knoxville's largest church auditorium, seating 1,600. The organ was purchased from the Riviera Theater in 1935.

The congregation is affiliated with the United Methodist Church.
Image Courtesy of Wikimedia and Brian Stansberry.
Sight description based on Wikipedia.
6

The Knoxville House of Faith is located in the Fourth and Gill Historic District. Initially the Trinity Methodist Episcopal Church, this grand antique-looking structure with a Latin cruciform plan includes Gothic arches, steep gables and two towers. The building was constructed in 1906 in the Late Gothic Revival style featuring high vaulted ceilings., designed by A. J. Cloud, and added to the National Register of Historic Places in 1982.
Image Courtesy of Wikimedia and Brian Stansberry.
Sight description based on Wikipedia.