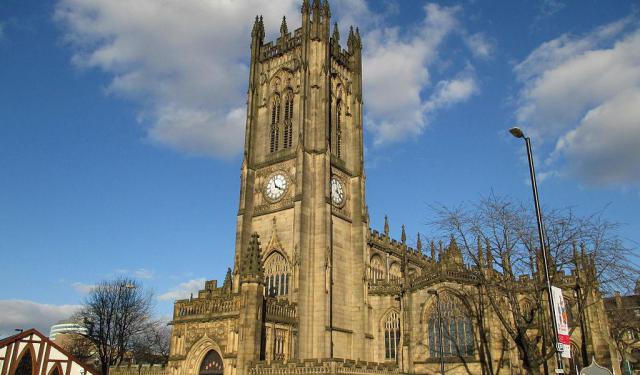 Image by Liverpool & Manchester on Wikimedia under Creative Commons License.

Manchester has many places of worship that serve different religions. Baptists, Roman catholics or other congregations have found their place in the city. Check out the listed religious sites of Manchester to appreciate their beauty on this self guided walking tour.
How it works: Download the app "GPSmyCity: Walks in 1K+ Cities" from iTunes App Store or Google Play to your mobile phone or tablet. The app turns your mobile device into a personal tour guide and its built-in GPS navigation functions guide you from one tour stop to next. The app works offline, so no data plan is needed when traveling abroad.

Manchester Cathedral has undergone extensive restoration works, both in the Victorian era and in recent years, following damage from the 1996 IRA bombing of the city centre. The cathedral has existed in some form on the site since medieval times, and holds artifacts that date back to Manchester’s existence as a Saxon settlement. The main body of this Gothic cathedral was originally constructed in the late 15th century, overseen by church warden James Stanley. The cathedral is Grade I listed and is the seat of the Bishop of Manchester. In accordance with British tradition, the presence of a cathedral is the reason that Manchester has been awarded city status.

The cathedral welcomes visitors to attend their services or to view the building’s interior. Admission is free, although donations are welcome. The cathedral is mostly wheelchair accessible, however parts of the Regiment Chapel and Quire are only accessible on foot. The cathedral runs and can be booked for a range of special events, such as weddings and other.

Image by Rept0n1x on Wikimedia under Creative Commons License.
2

St. Ann’s Church is a Grade I listed, 18th century temple located in front of St. Ann’s Square, at the heart of Manchester’s shopping district, where the fashionable shopping avenues of New Cathedral Street and Barton Arcade converge. The church was consecrated at this spot in 1712, when Manchester was little more than a rural parish town. Named after St. Anne, the church’s shortened name is a reference to Lady Ann Bland who was its first patron. The building was redeveloped during the Victorian era, with its red Collyhurst sandstone exterior replaced with harder wearing stone, and stained glass windows installed.

The completion of the church marked the rise of Manchester as an urban centre. Within ten years, St. Ann’s Square had been laid out in front of the church, based on the fashionable squares found in Bath and London. The church thus became so central to the city’s development that its bell tower is still considered the centre of the city. The benchmark which surveyors used to measure distances to Manchester’s satellite towns can still be seen at the base of the tower. A Church of England place of worship, St. Ann’s Church welcomes visitors and still holds regular Sunday services.

Image by The National Churches Trust on Flickr under Creative Commons License.
3

St. Mary’s Roman Catholic Church can be found on Mulberry Street, a quiet cul-de-sac between Deansgate and Albert Square, in the middle of Manchester’s city centre. The church has earned the more familiar local nickname of The Hidden Gem. As you approach and enter the building, the reasons for the name become apparent. Fashioned from unremarkable Victorian red brick and wedged into a typical Mancunian terrace, the church could easily be mistaken for a Victorian factory or mission building. Once through the elaborate entrance door that punctuates the uniform frontage of the building, you are greeted by the exceptional interior of the church.

With its marble altar, Victorian era carvings and life size statues of several saintly figures, the Hidden Gem is one of Manchester's most remarkable religious buildings. The church is Manchester’s oldest surviving Catholic place of worship. Consecrated in 1794, the church has been restored multiple times, most notably in 1833 when the church roof collapsed shortly after a church service. The church is still active and holds mass each weekday at 12.30pm, and on Saturdays and Sundays at midday. St. Mary’s is a welcoming city centre church that allows access for worship and prayer from 10am until 4pm each weekday.

Image by Parrot of Doom on Wikimedia under Creative Commons License.
4

Salford Cathedral is situated on Chapel Street in the City of Salford, which sits opposite Manchester city centre on the west bank of the River Irwell. The City of Salford covers a large swathe of western Greater Manchester, with its centre adjacent to Manchester’s. Chapel Street, a long west to east boulevard connecting the cathedral with Salford Central rail station, was the first street in the world to be illuminated entirely by gas light.

The cathedral itself was built in the 1840s, and consecrated in 1890. The decorative rooftop and distinctive tall spire was inspired by a cathedral in Liege, Belgium, as well as other neo-Gothic churches in the region. The building has been restored multiple times in the intervening years, most notably in 1881, when a storm caused major structural damage to the spire.

Salford Cathedral is a Grade II listed building. Recent restoration has added two modern features to this historic place of worship. An abstract stained glass building was installed in 1990, and a new digital church organ was added in 2004. Salford Cathedral is an active Roman Catholic church, which holds Sunday mass at 12.10pm and 5.30pm, as well as mass at 12.10pm each week day.
Image by Ian Roberts on Wikimedia under Creative Commons License.
5

The Church of St. Philip with St. Stephen is based on Wilton Place in the west of Salford, close to the city’s Meadow parkland and the University of Salford campus. A stone-built Georgian church in the Greek style, the church was built in 1824, and is one of Greater Manchester’s finest examples of Georgian architecture. Designed by architect Robert Smirke, the distinctive rounded front of the church has inspired similar designs around the country, including two London churches. Originally St. Philip’s, the church took on its present name when nearby St Stephen’s Church closed in 1962, and the church took over the running of St. Stephen’s parish and congregation.

The still active church describes itself as a welcoming, modern Anglican church which holds a lively weekly Communion at 9.45 each Sunday. The church also offers quieter, contemplative services each Tuesday evening at 7.00pm.. St. Phil’s, as it is known locally, has a strong musical tradition, holding regular organ recitals and Taize services, as well as a range of concerts. UK pop band Sugababes have even performed at the venue. The church opens its doors to visitors for two hours each Wednesday, and is accessible to wheelchair users and visitors with sensory impairment
Image by Richerman on Wikimedia under Creative Commons License.