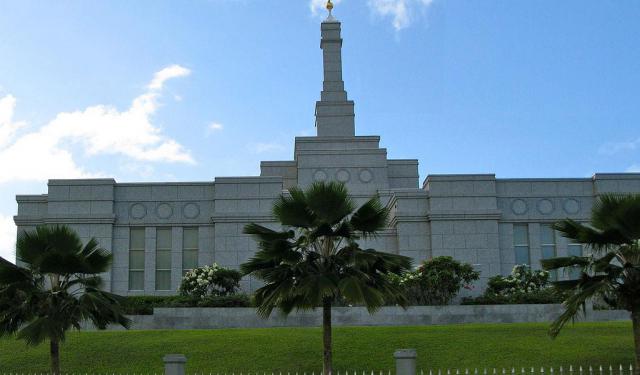 Image by Bhaskar Rao on Wikimedia under Creative Commons License.

Suva is not a city with deep religious roots, which is why you will not see many religious buildings here. Nevertheless, some noteworthy places of worship line the streets of Suva. The city's churches and cathedrals are stunning and reinforce the saying that it's quality, not quantity that counts. Take this tour to discover Suva’s beautiful sacred places.
How it works: Download the app "GPSmyCity: Walks in 1K+ Cities" from iTunes App Store or Google Play to your mobile phone or tablet. The app turns your mobile device into a personal tour guide and its built-in GPS navigation functions guide you from one tour stop to next. The app works offline, so no data plan is needed when traveling abroad.

Surrounded by a white picket fence, St. Andrews Presbyterian Church is one of the oldest wooden buildings in Fiji. On September 29, 1883, the Fiji Times (known then as the Suva Times) ran a story announcing the official opening of the church for public worship. Once associated primarily with the colonial settler families it slowly absorbed a wider community including students from the Pacific Theological College and the University of the South Pacific. Today it features a Facebook page and still offers regular services led by Rev. Dr. Bruce Yeates.

The St. Andrews Presbyterian Church is a folk Gothic Revival building with a front-facing gable form and two bays on either side. The symmetrical windows are pointed-arch shaped. The pair closest to the central entry is larger and more vertical, with original stain glass on one of the windows. The main entry is roofed with a gable-facing facade and wood-framed double doors.

Image by Michael Coghlan on Flickr under Creative Commons License.
2

Holy Trinity Cathedral has an unusual boat-shaped design. Inside, you will find a number of amazing Fijian tapestries. Pacific plants surround the exterior of the church, lending it a welcoming appearance. This church provides a peaceful retreat and welcomes anyone who seeks a moment of rest and reflection.
Image by einarfour on Flickr under Creative Commons License.
3

The Sacred Heart Cathedral also known as the Cathedral of Suva, is Fiji’s most prominent Roman Catholic edifice. Located on Pratt Street, construction of the building began 1894 but it wasn’t completed until 1939, 150 years after the first Marist missionaries arrived in Fiji. The grand European design includes sandstone blocks imported from Australia, concrete staircases and balustrades, and two towers. The central stained-glass window above the altar contains an image of a bilo (coconut shell cup) beneath the Sacred Heart of Jesus.

In 2020, in a Fiji Times article, Director of Communications for the Archdiocese, John Pickering, said Scared Heart Cathedral was patterned after the Gothic style architecture of cathedrals of Europe. The cathedral serves as the headquarters of the Metropolitan Archdiocese of Suva (Archidioecesis suvana) which was created in 1966 by Pope Paul VI by bull "Prophetarum voices". A crypt completed in 1896 now contains the remains of Archbishop Emeritus Petero Mataca, who was entombed in 2014. The cathedral is depicted on a Fiji stamp issued in 1979.

If you retrace your steps back to the Ivi Triangle and cross Scott Street, you’ll find Suva’s most distinctive art deco treasure.

Image by Robert Kay under Creative Commons License.
Sight description based on wikipedia
4

Centenary Methodist Church is a local Suva church that holds religious services every Sunday. The Methodist faith is the largest Christian religious domination in all of Fiji, and this church is one of the most important Methodist churches on the island.
Image by ˙·▪•● Peyman ●•▪·˙ on Flickr under Creative Commons License.
5

Church of God is located on Brown Street. This outstanding cathedral features marvelous architectural features and interior design. It is not affiliated with a particular denomination, but welcomes people of all faiths and beliefs.
Image by PORKCHOP RULES on Flickr under Creative Commons License.
6

Rotuman Church, or the Methodist Church of Fiji and Rotuma, is a Christian church. Every Sunday morning, the church holds religious services. This church is distinguished by its funerary monuments and art treasures, and the interior is exquisitely designed.
Image by ericadwoodson on Flickr under Creative Commons License.

Suva City can lay certain claim to being the largest and perhaps the most livable city in the South Pacific outside New Zealand or Australia. The capital of Fiji since 1883, it is set on 15 sq km of peninsula adjacent to one of the finest naturally protected harbors in the South Seas. It is home for about 330,000 residents (including its suburbs and neighboring communities.

As the capital of...  view more