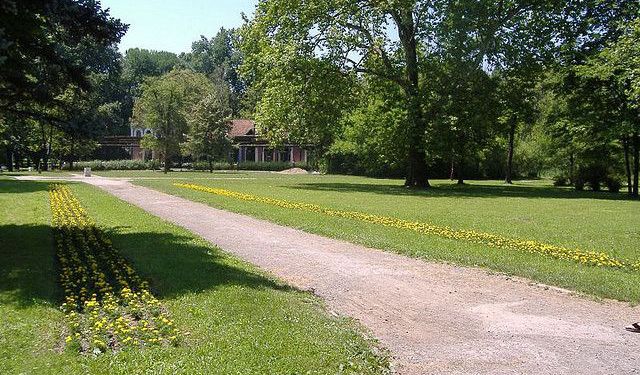 Image by lilit on Flickr under Creative Commons License.

Topčider is a large neighborhood in one of the greenest and most prestigious parts of Belgrade. Its parks and forests are centuries-old and have royal legends behind them. This tour will take you around the most notable royal residences, the Marshal Tito Mausoleum, and the famous Košutnjak Park.
How it works: Download the app "GPSmyCity: Walks in 1K+ Cities" from iTunes App Store or Google Play to your mobile phone or tablet. The app turns your mobile device into a personal tour guide and its built-in GPS navigation functions guide you from one tour stop to next. The app works offline, so no data plan is needed when traveling abroad.

The "House of Flowers" is a mausoleum of the leader of former Yugoslavia, Josip Broz Tito, who died on May 4, 1980. The name derives from the many flowers laid at Tito's tomb before the mausoleum was closed to the public. Nowadays, only the white rocks mark the place where flowers once lay. During Tito's life, the place served as his auxiliary office with a garden, and was nicknamed the "flower shop". For almost a decade, following the breakup of the Socialist Federal Republic of Yugoslavia, the entire complex (the tomb and the memorial museum) was closed to the public and the military guards removed. Today, the site is re-open for tourists and those who wish to pay their respect to the late leader. Among other artifacts, the museum displays the gifts received by Tito during his presidency. The admission is free, and the visitors are asked to sign in on the visitation roster.

Image by Rainer Messerklinger on Flickr under Creative Commons License.
Sight description based on wikipedia
2

2) Presentation of the Virgin Mary Monastery

The monastery of the Presentation of the Virgin Mary is located in Senjak. It was erected in 1936-37 by Perse Milenkovic, to the design of architect Pero Popovic. The monastery church was built in the style and tradition of Serbian medieval architecture: a monumental five-dome church with a basis in the form of an inscribed cross. The altar icons are the work of a Russian painter and date back to the 1930s. The chapel of Saint Nicholas, as part of the dormitory, was built at the same time as the church. In the monastery's courtyard there are tombs of clerical dignitaries: Metropolitan of Skopje Joseph, Metropolitan of Zagreb Dositeja, Metropolitan Arsenija Buda and Zagreb Archbishop of Damascus.
Image by bcjens on Flickr under Creative Commons License.
3

3) Church of the Holy Apostles Peter and Paul

The Church of the Holy Apostles Peter and Paul was established in 1832-1834 by Prince Milos Obrenovic. Legend has it that Prince Milos built it as a token of his salvation, after he escaped capture by Karadjordje in a battle against the Turkish army at Topcider. Others say the church stands on the very spot where the Prince was to be executed for opposing Karadjordje. Built of yellow sandstone, the church has a high tower over the western facade, impressive in its simplicity. The tower was built using old tombstones put upside down, with no signs, and with some ornaments, taken from the nearby ancient cemetery. The church's facade is divided by pilasters and capitals with fine semicircular arches. The interior's upper parts of the western and southern portals have stone carvings of grapevine motifs and other stylized floral ornaments and crosses. The icons are painted in western Baroque style, with traces of Rococo. The iconostasis was last gilded with pure gold in 1929.
Image by bcjens on Flickr under Creative Commons License.
4

The Konak of Prince Miloš Obrenović - a royal residence in Topčider - was built in 1831, after Serbia received an autonomy status in the Ottoman Empire, and Prince Milos was made hereditary prince. The Konak was built in a style representative of Ottoman residences by masters Janja Mihailović and Nikola Đorđević; the work was led by Hadži Nikola Živković, the supervisor of almost all construction projects for Prince Miloš. The original rich interior decorations have been partially preserved. The Konak once housed the Museum of Prince Miloš, as well as the Mihailo Obrenović hunting and forestry museum founded in 1929. In front of the building stands one of the oldest and most beautiful sycamore (Platanus) trees in Europe, protected as a natural rarity (aged over 160).
Image by lilit on Flickr under Creative Commons License.
Sight description based on wikipedia
5

RTV Pink or Radio-Television Pink is a popular, privately-owned, national TV network in Serbia. Pink is the leading commercial station in the Serbian television broadcast market. TV Pink has gained a strong reputation for its entertainment programming.

Image by Bill Selak on Flickr under Creative Commons License.
Sight description based on wikipedia
6

Kraljevski Dvor (The Royal Court/Palace) is sometimes referred to as Stari Dvor (The Old Court/Palace), because it was built before the White Palace. The building represents a grand stucco villa in Serbian-Byzantine style designed by architect Živojin Nikolić, who was assisted by Russian immigrant architects Nikolai Krasnov and Victor Lukomsky. The construction lasted from 1924 to 1929, and produced an ideal home for King Alexander I and Queen Maria. The King thought that it would be a nice and quiet place, away from the city clamor and prying public eyes. Among other attractions, visitors to the Palace can see the Formal Entrance Hall with the elements of medieval Serbian art, the Blue Salon, the Royal Dining Room, the Royal Library, the Atrium, the Wedding Gifts Salon, and the King’s Office. A special attraction is the Royal Basement.
Image by sokobanja_21 on Flickr under Creative Commons License.
Sight description based on wikipedia
7

Beli Dvor (The White Court/Palace) is a mansion that is part of the Royal Compound, an estate of royal residences and parks located in Dedinje, an exclusive area of Belgrade. The complex includes service buildings (kitchens, garages, Palace Guard), the Office of the Marshal of the Royal Court, etc. Designed by architect Aleksandar Đorđević, Beli Dvor is a severe neo-Palladian structure that was inspired by the 18th century English houses, such as Ditchley Park. Its interiors were decorated with English Georgian and the 19th century Russian antiques by French design firm Jansen, which later decorated the White House under the administration of John F. Kennedy. Although some historians claim that the building was completed in 1937, Princess Elizabeth of Yugoslavia was born there in 1936, so it is safe to say that the White Palace was completed at that time.
Image by milos.stankovic on Flickr under Creative Commons License.
Sight description based on wikipedia
8

Košutnjak is a park-forest and a neighborhood in Belgrade. It is one of the city's most popular areas and incorporates two sub-neighborhoods - Filmski Grad and Pionirski Grad. Among other attractions, it features a sports center, an auto-camp, the Radio Television of Serbia studios, many restaurants and designated walking paths criss-crossing the forest. In the lower parts, the Košutnjak and Topčider forests merge, while in the upper parts they are separated by the Topčiderska River and a railway, crossing the river's valley. Košutnjak gained a sort of historical notoriety because of Prince Mihailo Obrenović III, who was assassinated while walking in the park on June 10, 1868 (old style May 29). Also, Ivan Stambolić, the political opponent of Slobodan Milošević, was abducted from the park on August 25, 2000, and later assassinated.
Image by JustUser on Wikimedia under Creative Commons License.
Sight description based on wikipedia