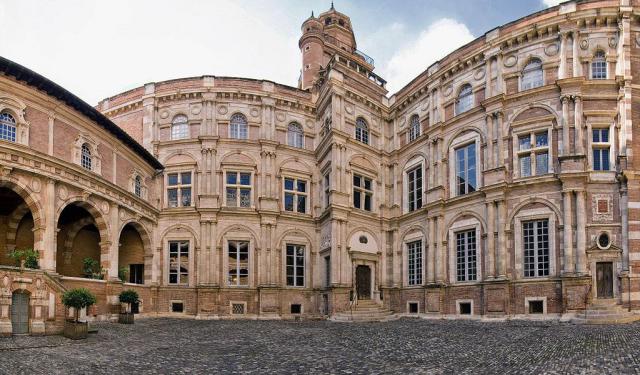 Image by Pom on Wikimedia under Creative Commons License.

Toulouse is the sixth-largest city in France and has an endless list of interesting places to visit. Some of the city's most noteworthy attractions are its museums, where you will find a large array of paintings, artifacts, sculptures and more. Take the time to explore the beautiful museums and galleries of Toulouse on this walking tour.
How it works: Download the app "GPSmyCity: Walks in 1K+ Cities" from iTunes App Store or Google Play to your mobile phone or tablet. The app turns your mobile device into a personal tour guide and its built-in GPS navigation functions guide you from one tour stop to next. The app works offline, so no data plan is needed when traveling abroad.

Musée Saint-Raymond is located in a historic villa near Basilica Saint Sernin. It is a world-famous museum that exhibits a wide range of items. The museum's collection lacks a general theme but that makes exploring the museum even more interesting. You can find Roman sculptures and reliefs, Christian sarchophagi, Gaul jewelry and much more.

Image by Damien on Flickr under Creative Commons License.
2

Musée du Vieux Toulouse is located in a 17th-century mansion and contains many important historical and cultural items from Toulouse. Here you can discover thousands of objects related to the city, its ancient institutions and customs. This quiet museum will surely delight history buffs.

Image by Mage31 on Wikimedia under Creative Commons License.
3

Since 1994 the Hôtel d'Assézat has housed the Bemberg Foundation (Fondation Bemberg), an art gallery that displays the personal collection of the rich Argentinian Georges Bemberg. His foundation was created in collaboration with the city of Toulouse. The gallery's large collection features paintings, drawings, sculptures, ancient books and furniture, with a focus on 19th- and early 20th-century French paintings, as well as 16th- and 18th-century Venetian paintings.

Image by Ceridwen on Wikimedia under Creative Commons License.
Sight description based on wikipedia
4

The Musée des Augustins de Toulouse is a fine arts museum which conserves a collection of sculpture and paintings from the Middle Ages to the early twentieth century. The paintings are from throughout France, the sculptures representing Occitan culture of the region with a particularly rich assemblage of Romanesque sculpture.

The progressive concern of the museum's founder Jean-Antoine Chaptal, an early example of cultural devolution, was intended to ensure that "each collection presents an interesting series of paintings representing all the masters, all the genres and all the schools". In a series of shipments culminating in 1811, Toulouse was enriched with works by Guercino, Pietro Perugino, Rubens and Philippe de Champaigne.

The collections total over 4,000 works and their core derives from confiscation of Church property at the time of the French Revolution as well as seizures of the private collections of emigrés, in Toulouse notably the paintings of the cardinal de Bernis and Louis-Auguste le Tonnelier, baron de Breteuil. The museum's church even houses an organ built in 1981 by Jürgen Ahrend.
Image by Jamiecat * on Flickr under Creative Commons License.
Sight description based on wikipedia
5

Musée Paul Dupuy is situated in the old Hôtel de Besson near the Capitol. The exhibits were collected by Paul Dupuy, a resident of Toulouse, at the beginning of the 20th century. The collection is divided into several sections. One room has an exhibit of gold pieces, enamel, 18th- and 19-century clothing, furniture, wooden sculptures and a marvelous collection of Edouard Gélis watches. A second room is dedicated to meteorology, coins, seals, and more, while a third room houses paintings and engravings.
Image by Didier Descouens on Wikimedia under Creative Commons License.
6

The Muséum de Toulouse, is a museum of natural history. It houses a collection of more than 2.5 millions items.

The museum was founded in 1796 by the naturalist Philippe-Isidore Picot de Lapeyrouse. It was at that time housed in the old buildings of the monastery of the carmelite friars. It was opened to the public in 1865 in its present location and under the directorship of Edouard Filhol.

Toulouse museum was the first museum in the world to open a gallery of prehistory, thanks to the collaboration of Émile Cartailhac, Jean-Baptiste Noulet and Eugène Trutat. Today the museum is housed in a 2007 building designed by the architect Jean-Paul Viguier.

Operating hours: Tuesday - Sunday: 10 am – 6 pm
Image by frederic.salein on Flickr under Creative Commons License.
Sight description based on wikipedia