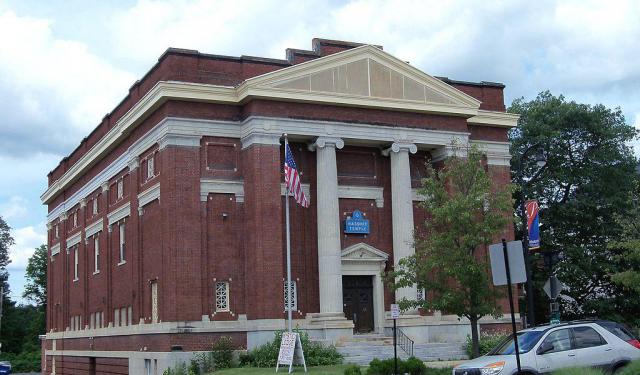 Image by AlexiusHoratius on Wikimedia under Creative Commons License.

This tour starts at Garces Memorial Traffic Circle and heads north to the Kern County Museum downtown. You will visit Pioneer Village, the Children’s Discovery Center, and other attractions that shouldn't be missed! Explore Bakersfield's fun and vibrant Chester Avenue on this tour.
How it works: Download the app "GPSmyCity: Walks in 1K+ Cities" from iTunes App Store or Google Play to your mobile phone or tablet. The app turns your mobile device into a personal tour guide and its built-in GPS navigation functions guide you from one tour stop to next. The app works offline, so no data plan is needed when traveling abroad.

The Lori Brock Children’s Discovery Center is part of the Kern County Museum, which was established in the late 1970s. The art, history, and science exhibits provide a hands-on experience for kids. Your kids will have a great time learning about plants and animals, art, the universe, and more. The center is open Tuesday to Saturday from 10 a.m. to 4:00 p.m.; Sunday 12 p.m. - 4 p.m.
Image by Lars Plougmann on Flickr under Creative Commons License.
2

The Kern County Chamber of Commerce Building is a historic building in Bakersfield, California. It is considered one of the best surviving example of architecture designed by Charles H. Biggar. It is a combination of three architectural styles: Beaux Arts, Mission Revival, and Arts and Crafts.

In the mid 1920s, Kern County decided to build a structure that would showcase both products and innovations from the county. Although it would be the headquarters of the Kern County Chamber of Commerce, the building would be constructed by the county government. A site on the Chester Avenue near the Kern River, which the county already owned, was selected.

In 1945, the Kern County Museum opened. It utilized a small portion of the Chamber of Commerce building. The museum became very popular, and the amount of artifacts on display continued to increase.

Image by alliecreative on Flickr under Creative Commons License.
Sight description based on wikipedia
3

Pioneer Village includes more than 50 historic structures, which were moved from their original locations to the old Kern County Fairgrounds. The structures are representative of the style from the time and location they were built. There is a school building, depot, hotel, church, wooden oil-well derrick, pumping equipment and more. The site is arranged just like a real pioneer settlement would have been.
Image by alliecreative on Flickr under Creative Commons License.
4

Beale Memorial Clock Tower is a clock tower located in Bakersfield, California. It was a gift to the city; built by Truxtun Beale in memory of his mother, Mary Edwards Beale. It was dedicated on April 4, 1904. When he was ambassador to Spain, Beale was inspired by a clock tower he saw there. He hired architect Clinton Day to design it.

In 1910, the Bakersfield and Kern Electric Railway started planning a double track upgrade on the South Chester Line. The Beale Clock Tower was right in the path of that line upgrade. On January, 22 1912, the Bakersfield City Council voted to remove the clock tower. However, after protest from citizens, and Truxtun Beale, it was decided to leave the clock tower. Tracks were built around it, which would create future traffic problems. However, the citizens at the time were content to drive around the narrow space.

The clock tower continued to stand until 1952, when a series of earthquakes shook Kern County. Being damaged by the earthquake, the city council again voted to demolish it. The only parts to survive were the: clock works, bell, iron spiral stairwell, balcony railings, and arch iron grillwork.

In 1961, a group of local citizens organized an effort to rebuild the clock tower. The new clock tower would be built in front of the Kern County Museum on Chester Ave, approximately 1.25 miles north of its original location. It was dedicated on December 13, 1964 to the County of Kern.

Image by alliecreative on Flickr under Creative Commons License.
Sight description based on wikipedia
5

The Supply Sergeant is a military surplus store that will appeal to hiking, camping and outdoors enthusiasts. The store offers a fine selection of survival goods. The parking lot is full of historical military vehicles, tanks, tools, and equipment, as well as a model submarine, which is fun to explore. You can find just about anything survival-related here, including patches, gloves, goggles, first aid kits, camouflage uniforms, hats, durable boots, and much, much more.
Image by BlackDaffodill on Flickr under Creative Commons License.
6

The Father Garces Statue was erected in honor of American missionary and traveler Francisco Garces (1738–1781). This limestone statue, designed by regional artist John Palo-Kangas in 1939, stands at the traffic circle on US 99. More than 20 feet tall, the statue was designed in the Modern style. The pedestal bears a plaque declaring the statue a Historic Landmark.
Image by Bobak Ha'Eri on Wikimedia under Creative Commons License.