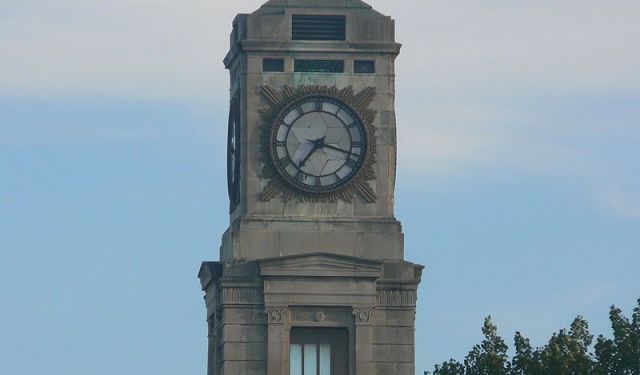 Layton is the eastern district of Blackpool, and it boasts a number of tourist attractions that are definitely worth a visit. From historic buildings to wonderful parks and a fascinating zoo, this city district has much to experience. Take this tour to explore Blackpool's fascinating Layton district.
How it works: Download the app "GPSmyCity: Walks in 1K+ Cities" from iTunes App Store or Google Play to your mobile phone or tablet. The app turns your mobile device into a personal tour guide and its built-in GPS navigation functions guide you from one tour stop to next. The app works offline, so no data plan is needed when traveling abroad.

Situated on Church Street, the Salvation Army Citadel was constructed between 1904 and 1905 as Raikes Road Technical School. It later served as a grammar school, and it now houses the Salvation Army. The building was designed in the Baroque style. This red-brick building has a slate roof, copper domes, and gray terracotta dressings. On the southwest side of the building is a three-story tower with a copper dome. The Salvation Army Citadel is a Grade II listed building.
Image by Belovedfreak on Wikimedia under Creative Commons License.
2

Raikes Hall is located on Liverpool Road. It was originally constructed in the mid-18th century as the home of the Hornby family. The house was built using brick, and it has a slate roof, a semi-circular porch, and fluted columns. In 1871, Raikes Hall Park, Gardens and Aquarium Company purchased the home, and Raikes Hall became part of the company's pleasure gardens. In 2010, the hall opened as a pub. Raikes Hall is a Grade II listed building.
Image by Belovedfreak on Wikimedia under Creative Commons License.
3

Stanley Park opened to the public in 1926 and was designed by English architect Dr. Mackenzie. This prominent landmark is one of the most beautiful green areas in Blackpool and is a fine example of a Victorian park. Divided into four major areas, this popular attraction has an impressive amphitheater, beautiful rose gardens, tennis courts, a golf course, and much, much more.
Image by Neil T on Flickr under Creative Commons License.
4

Elmslie School was an independent girls' school in the English seaside resort of Blackpool from 1918–2000. The school was started in a former house called The Elms, and later expanded into other buildings on the site.

The Elms was originally the family home of William and Sarah Powell, built in 1896 to a design by T. P. Worthington. Elmslie School was founded in 1918 by sisters Elizabeth, Polly and Peggy Brodie. The school, which occupied the former home of the Powell family, had just 11 pupils to start with; Elizabeth Brodie was the first headmistress. The Diocese of Blackburn's Board of Finance ran the school from 1948. Elmslie closed in 2000.

The Elms is a two-storey house built on an L-shaped plan, of red brick, with a sandstone front façade. There are three bays at the front, the left-hand of which is gabled. Both the left and right bays have small turrets on either side of the upper windows; the left turrets are topped with pinnacles, the right with crenellated caps. The central front entrance has a porch with marble columns. Internally, many of the building's original fittings are intact.

Image by jyryk58 on Flickr under Creative Commons License.
Sight description based on wikipedia
5

Blackpool Model Village Gardens is a popular attraction located on East Park Drive. It showcases many fabulous real-life scenes in miniature. It is a beautifully landscaped garden with numerous paved pathways. The gardens also include a small harbor, a church, a lighthouse, a historic caravan park, and a watermill. Blackpool Model Village Gardens is an enjoyable journey to the past, where harmony and tranquility reign.
Image by I like on Flickr under Creative Commons License.
6

Blackpool Zoo is a 32-acre zoo, owned by Parques Reunidos and located in the sea-side resort of Blackpool. It provides a home to over 1,500 animals from all over the world. The zoo has recently changed ownership twice - once in 2003, and again in 2007, resulting in continued investment each year.

Opened in 1972, in recent years the Zoo has been the subject of demonstrations by local animal rights campaigners. 2005 saw the opening of the 'Dinosaur Safari', a walkthrough exhibition featuring plastic models of 32 life-size dinosaurs around a trail. "Amazonia" opened in 2006. This is a walk-through enclosure of South American animals and birds including 5 species of monkeys. In summer 2009, penguins were to be added to the list of animals at the zoo, with the arrival of 20 African penguins from two Spanish conservation centers.

Image by spamdangler on Flickr under Creative Commons License.
Sight description based on wikipedia
7

7) Shrine of Our Lady of Lourdes

The Shrine of Our Lady of Lourdes stands in Whinney Heys Road, Blackpool. The shrine was built between 1955 and 1957 to a design by Francis Xavier Verlarde. During the Second World War Bishop Thomas E. Flynn, the bishop of the Roman Catholic Diocese of Lancaster, prayed to Our Lady of Lourdes, the patron saint of the diocese, to protect the diocese from war damage. By the end of the war it was relatively undamaged, and the bishop conceived the idea of building a thanksgiving chapel to commemorate this.

The shrine was deconsecrated in 1993, and passed into the ownership of the Historic Chapels Trust in 2000. The chapel is constructed in Portland stone and has copper cladding to the roof and flèche. Its plan is nearly rectangular, and it has four bays. At the west end there is single-bay narthex, and at the east end is an apse forming the sanctuary, and projecting vestries. In the west front are double doors over which is a relief frieze of the Holy Trinity by David John.
Image by Belovedfreak on Wikimedia under Creative Commons License.
Sight description based on wikipedia
8

Layton Cemetery Chapel is located in the center of Layton Cemetery. This mortuary chapel was designed in 1873 by the architectural firm Garlick, Park and Sykes. It is one-story building with three bays. At the center of the structure is a large tower with an octagonal spire.
Image by Bob Jenkins on Wikimedia under Creative Commons License.