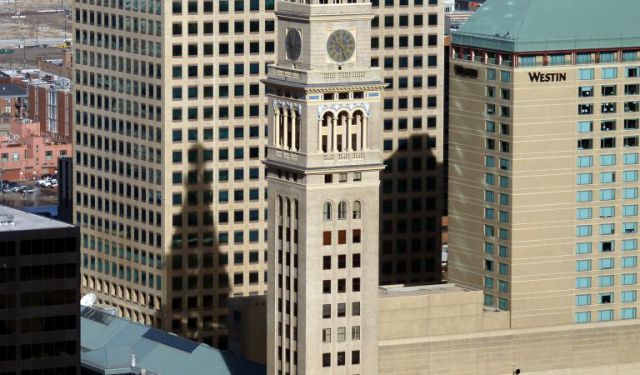 Image by David Shankbone on Wikimedia under Creative Commons License.

Denver has some of the most elegant and beautiful skyscrapers and high-rises in the U.S. Take this tour to view Denver's inspiring towers, from the elegant 1920s era buildings to today's architectural giants made of glass and concrete.
How it works: Download the app "GPSmyCity: Walks in 1K+ Cities" from iTunes App Store or Google Play to your mobile phone or tablet. The app turns your mobile device into a personal tour guide and its built-in GPS navigation functions guide you from one tour stop to next. The app works offline, so no data plan is needed when traveling abroad.

The Daniels & Fisher (D&F) Tower is a distinctive Denver landmark. Built as part of the Daniels & Fisher department store in 1910, it was the tallest structure west of the Mississippi at the time, at a height of 325 feet (99 m). The building was designed by the architect Frederick Sterner and modeled after The Campanile (St. Mark's Bell Tower) at the Piazza San Marco in Venice, Italy. The 20-floor clock tower has clock faces on all four sides. Daniels & Fisher were later bought out by the May Company in 1958, and the store vacated the tower. When the store was demolished (ca. 1971), the tower was saved and renovated into lofts and businesses in 1981. It stands today in downtown Denver. The basement level of the D&F tower now hosts Lannie's Clocktower Cabaret, Lannie Garrett's own entertainment venue. The tower was listed on the National Register of Historic Places in 1969. A 2½ ton bell occupies the top two floors of the building, above the observation deck.
Image by cliff1066™ on Flickr under Creative Commons License.
Sight description based on wikipedia
2

The Ritz-Carlton Denver, formerly known as the Embassy Suites Downtown, is part of the Denver Place complex, which was completed in 1983. The building rises 38 floors and is 390 feet (119 m) in height. It stands as the eighteenth-tallest building in Colorado. At the time it was built it was the second-tallest hotel building in Denver, behind the 522-foot (159 m) MCI Building, now known as 707 17th Street; this structure is a mixed use hotel and commercial property whose lowest 20 floors are occupied by a private condominium (floors 15-19) and a Ritz-Carlton. Embassy Suites operated 337 guest rooms in the tower, including several suites. The uppermost 17 floors of the tower consist of apartments.
Image by Jeffrey Beall on Wikimedia under Creative Commons License.
Sight description based on wikipedia
3

Denver Place is an office complex that consists of the North and South Towers, Terraces and the Plaza Tower. Denver Place is Colorado's largest commercial office property. The complex offers stunning 350-degree views of Denver, including those of the breathtaking Rocky Mountains. Denver Place South Tower is the tallest building of the complex. It is 416 feet (127 m) tall, has 34 floors, and was completed in 1981. The Denver Place complex spans roughly two city blocks. The Denver Place North and South Towers take up the southeastern block. They were developed in 1981 by Devco Property Inc. from a design by Marvin E. Knedler & Assoc. Architects, P.C. The North Tower is 285 feet tall with 23 floors. The two towers are elongated hexagons made of silver-gray aluminum panels contrasted by dark gray reflective glass.
Image by David Shankbone on Wikimedia under Creative Commons License.
Sight description based on wikipedia
4

1999 Broadway is a modernist skyscraper with a height of over 165 meters. Its white and dark blue exterior blends well with the sky. The building has a unique sickle shape that embraces a neighboring church. 1999 Broadway is considered one of Denver's most distinguished skyscrapers and is one of the five tallest buildings in the city.
Image by David Shankbone on Wikimedia under Creative Commons License.
5

Qwest Tower, also known as 1801 California Street, was completed in 1983, and rises 52 floors and 709 feet (216 m) in height. The building stands as the second-tallest in Colorado and as the 111th-tallest in the United States. The building has a brown concrete facade and has a stepped design featuring four setbacks. It is an example of late-modernist high-rise architecture. The shape of the building resembles two interlocked octagonal sections, which separate near the building's roof. The roof houses an antenna mast; with this structure included, the building reaches to a total height of 738 feet (225 m), surpassing the 717-foot (219 m) roof of Republic Plaza. Therefore, when measuring by pinnacle height, 1801 California Street remains the tallest building in Denver.
Image by Tijuana Brass on Wikimedia under Creative Commons License.
Sight description based on wikipedia
6

707 17th Street, formerly known as the MCI Building, was completed in 1981, and rises 42 floors and 522 feet (159 m) in height. The building stands as the sixth-tallest building in Denver as of 2010. It was the tallest building in the city at the time of its 1981 completion, and held that distinction for two years until it was surpassed by the 709-foot (216 m) 1801 California Street in 1983. 707 17th Street has a somewhat unique "setfront" design, rather than the usual setback found in other Denver skyscrapers such as 1801 California Street. The building bulges out and becomes wider at its 15th floor, thus the term "setfront". The narrower region at the bottom of the hotel is home to the Marriott Hotel, whereas the upper, wider floors contain most of the commercial space. The building's facade is composed of black glass, and it is an example of international-style "black box" architecture.
Image by Jey Vigil on Wikimedia under Creative Commons License.
Sight description based on wikipedia
7

Equitable Building is a historic building, as it was Denver's first period skyscraper. It was built in 1892 in the Italian Renaissance Revival style and has a height of 44 meters. The brown and beige bricks and terracotta give the building's facade a warm, classy style. Today it is a business center and one of the most aristocratic edifices in Denver.
Image by Hustvedt on Wikimedia under Creative Commons License.
8

555 17th Street, formerly known as the Anaconda Tower and the Qwest Tower, was completed in 1978, and rises 40 floors and 507 feet (155 m) in height. The building stands as the seventh-tallest building in Colorado. It also stood as the tallest building in Denver at the time of its 1978 completion, and it held that distinction for three years until it was surpassed by the 709-foot (216 m) 707 17th Street in 1981. 555 17th Street is composed entirely of Class A office space, containing features such as a tenants' restaurant, private club, and conference center. The building is home to the offices of big-four accounting firm Deloitte & Touche. Holland & Hart, a major law firm, has its headquarters in 555 17th Street. The building's largest tenant is still Qwest, although the structure no longer bears the company's insignia.
Image by Doodah67 on Wikimedia under Creative Commons License.
Sight description based on wikipedia
9

Republic Plaza rises 714 feet (218 m) and currently stands as the tallest building in Denver, the state of Colorado and the entire Rocky Mountain region. It was built in 1984, and contains 56 floors, the majority of which are used as office space. Republic Plaza currently stands as the 109th-tallest building in the United States. Designed by Skidmore, Owings & Merrill and built of reinforced concrete clad in Sardinian granite, Republic Plaza includes 1,200,000 square feet (111,000 m2) of office space and three retail levels containing shops, restaurants, and service businesses. The building has a three-story marble lobby that hosts a quarterly "Art in Public Places" program featuring Colorado and regional artists. On October 27, 2007, the building's top 20 stories were backlit in purple with giant white letters "C" and "R" to celebrate the Colorado Rockies' World Series debut.
Image by David Shankbone on Wikimedia under Creative Commons License.
Sight description based on wikipedia
10

Wells Fargo Center resembles a cash register or mailbox and is known locally as the "Cash Register Building", "Milk Carton," and sometimes as the "Mailbox Building." Designed by architect Philip Johnson and completed in 1983, it is the most recognizable building in downtown Denver. As it was originally designed for a downtown area in Texas, a heated roof is necessary to prevent snow from accumulating and sliding dangerously off the curved crown. Located at 1700 Lincoln Street, a skybridge over Lincoln Street connects the Wells Fargo Center to the building at 1700 Broadway which houses among other things, a food court, a small museum featuring artifacts and memorabilia from Wells Fargo history, and the Downtown Denver branch of Wells Fargo Bank. Both buildings have large atriums constructed in the same cash register style.
Image by Onetwo1 on Wikimedia under Creative Commons License.
Sight description based on wikipedia