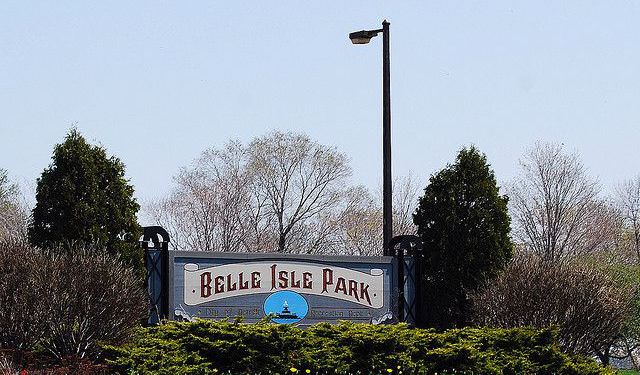 Image by Patricia Drury on Flickr under Creative Commons License.

Detroit's Belle Isle is a wonderful island connected to the city by a bridge. There are many interesting tourist attractions on the island. You can visit a museum, stroll through a fairy-tale-beautiful park, see a memorial lighthouse and more. Take this self-guided tour to explore Belle Isle, which is fittingly named 'beautiful island'.
How it works: Download the app "GPSmyCity: Walks in 1K+ Cities" from iTunes App Store or Google Play to your mobile phone or tablet. The app turns your mobile device into a personal tour guide and its built-in GPS navigation functions guide you from one tour stop to next. The app works offline, so no data plan is needed when traveling abroad.

The MacArthur Bridge is a bridge that spans the Detroit River between Detroit and Belle Isle. The bridge, which features nineteen total arches across 2,193 feet (668 m), provides main access to Belle Isle. Completed in 1923 for $2,635,000 USD, it replaced a mostly wooden bridge that accidentally caught fire and was destroyed in 1915. The bridge, once known as the Belle Isle Bridge, was later renamed the Douglas MacArthur Bridge after General Douglas MacArthur in 1942. It was restored in 1986 at a cost of $11.5 million.
Image by jodelli on Flickr under Creative Commons License.
Sight description based on wikipedia
2

The Floral Clock is visible as you enter Belle Isle from MacArthur Bridge. It is an enormous outdoor clock made of colorful plants. The clock is set on a small hill, and the time can be read from a long distance. A flag of the United States stands at the clock.
Image by Derek Ramsey on Wikimedia under Creative Commons License.
3

The James Scott Memorial Fountain in Detroit was designed by architect Cass Gilbert and sculptor Herbert Adams. Located in Belle Isle Park, the fountain was completed in 1925 at a cost of $500,000. The lower bowl has a diameter of 510 ft (160 m) and the central spray reaches 125 ft (38 m). The fountain honors the controversial James Scott, who left $200,000 to the City of Detroit for a fountain in tribute to himself.

Scott was left a sizable fortune by his father who invested in Detroit real estate. According to contemporaries, Scott gambled and told off-color stories. He was described by twentieth-century author W. Hawkins Ferry as vindictive and a misanthrope who attempted to intimidate his business competitors and when this was unsuccessful, he filed suit. Perhaps for these reasons, Scott died in 1910 with no heirs or colleagues and he bequeathed his estate to the City of Detroit with the condition that the fountain include a life-sized statue of him. Some accounts state that the will required that the statue be at the fountain's pinnacle.

Several community and religious leaders spoke against accepting the bequest saying that a person with Scott's reputation should not be immortalized in the city. Mayor Philip Breitmeyer and City Council President David Heineman urged accepting the gift saying that the city shouldn't insult any of its citizens by refusing such a generous offer. While the debate raged, Scott's fortune continued to grow and by the time construction commenced it topped $1 million. The final design placed Scott's statue in an inconspicuous spot behind the fountain.

Image by Mike Russell on Wikimedia under Creative Commons License.
Sight description based on wikipedia
4

The Nancy Brown Peace Carillon is a high tower and clock located on Belle Isle. It is a musical monument to peace built in the Neo-Gothic style in 1940. You can hear the music and bells from the tower on the hour and half hour. The carillon is named after Nancy Brown, a popular Detroit newspaper writer. Ironically, the tower was built during WWII. The shadow from this tower points from the U.S. to Canada, commemorating 170 years of peace between these two countries.
Image by Mike Russell on Wikimedia under Creative Commons License.
5

The Anna Scripps Whitcomb Conservatory is a greenhouse and botanical garden in Detroit. It covers 13 acres (5.3 ha) located three miles (4.8 km) east of the city's downtown on Belle Isle. The conservatory was built in 1904, designed by noted architect Albert Kahn, and rebuilt 1952-1954 with aluminum replacing its original wooden beams. In 1953 it was named in honor of Anna Scripps Whitcomb, who left her 600-plant orchid collection to the city. Thanks to her gift and subsequent donations, the conservatory is now home to one of the largest municipally-owned orchid collections in the United States.

The conservatory site contains formal perennial gardens, annual flower beds, a rose garden, and lily pond garden. The conservatory itself covers more than an acre, features an imposing central dome 85 feet (26 m) high (with a total volume of 100,600 cubic feet), and is organized as a palm house in the dome, the north and south wings, and a show house. The south wing contains tropical plants of economic importance such as bananas, oranges, coffee, sugar cane, and orchids. The north wing hosts the extensive collections of ferns, cacti and succulents. The show house, remodeled 1980-1981, features a continuous display of blooming plants.

Image by Robert Thompson on Wikimedia under Creative Commons License.
Sight description based on wikipedia
6

The Dossin Great Lakes Museum is a Detrot historical maritime museum located on The Strand on Belle Isle Park along the Detroit River. This museum places special interest on Detroit's role on national and regional maritime history. The 16,000-square-foot (1,500 m2) museum features exhibits such as one of the largest collection of model ships in the world, and the bow anchor of the legendary SS Edmund Fitzgerald.

With $125,000 worth donations from Detroit's Dossin family, and a matching subsidation by the city's historical commission, the Dossin Great Lakes Museum broke ground on May 21, 1959, and was opened on July 24, 1961, at the former Belle Isle location of the J.T. Wing. The Dossin Museum, after a 10-week renovation, re-opened to the public on March 24th, 2007 after over $100,000 in refurbishments. The renovation added four new exhibits, and the museum will rotate exhibits more often than in previous years.

Operation hours: Friday – Sunday: 10 am – 4 pm.
Image by Annebethmi on Wikimedia under Creative Commons License.
Sight description based on wikipedia
7

It is home to the Anna Scripps Whitcomb Conservatory, the Detroit Yacht Club on an adjacent island, the Detroit Boat Club, James Scott Memorial Fountain, the Dossin Great Lakes Museum, a Coast Guard station, and a municipal golf facility. The city maintains a Nature Center where visitors are able to traverse wooded trails and view wildlife natural habitats. The island includes a half-mile (800 m) swimming beach.
Image by Robert_N._Dennis on Wikimedia under Creative Commons License.
Sight description based on wikipedia
8

Belle Isle Nature Zoo was established 114 years ago, although it has closed and reopened several times over the years due to financial problems. It most recently reopened in 2005. The zoo is home to many deer. Although deer used to run wild on Belle Isle, most deer on the island today can be found only at the zoo. There are also other native Michigan species, such as the state's favorite reptile- the turtle.
Image by dherrera_96 on Flickr under Creative Commons License.
9

Livingstone Memorial Lighthouse bears the name of William Livingstone who lived in Detroit and was the chief of the association that deals with the movement of ships on the waters of the Great Lakes. This lighthouse, located on the north side of the beautiful Belle Isle, was built in 1930 entirely of marble. There is a bronze lantern room at the top of the lighthouse tower. The light projected from the tower is visible to ships from a distance of 15 miles.
Image by City Photos and Books, Inc. on Flickr under Creative Commons License.