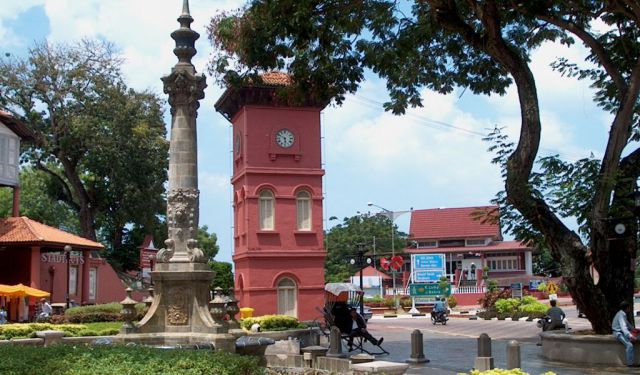 Melaka is the capital city of Malaysia, its historical hub and center of tourism. Melaka has variety of interesting sights and landmarks, which reflect the long history of the city. Many of these attractions are located in the Stadthuys, or central, area of the city. Take this tour to visit the most interesting sights in Melaka!
How it works: Download the app "GPSmyCity: Walks in 1K+ Cities" from iTunes App Store or Google Play to your mobile phone or tablet. The app turns your mobile device into a personal tour guide and its built-in GPS navigation functions guide you from one tour stop to next. The app works offline, so no data plan is needed when traveling abroad.

The Melaka Water Wheel is located beside the Melaka River near the tourist information center. Although it is just a replica and no longer functions, the wheel serves as a reminder of the city’s wealthy past, when it was used to fuel Melaka’s booming port trade.
Image by Nono Fara on Flickr under Creative Commons License.
2

Located in the heart of the city, the Middelburg Bastion is a historic landmark built by the Dutch in the 1660s. It provided additional security for the city’s fort, the local port and the Malacca River. Here you can also see rifles, cannons and a white turret, which served as a lookout point.
Image by Henry Wong on Flickr under Creative Commons License.
3

The Mouse Deer Sculpture is a prominent attraction located at the center of the city. It is a beautiful sculpture of a kancil, or mouse deer. The mouse deer is described in Malay legend as a courageous animal and is well respected by locals.
Image by Tristan Schmurr on Flickr under Creative Commons License.
4

Melaka's prominent Red Clock Tower is probably one of the city's most famous sights. It is located on Dutch Square in Melaka's Stadhuys, or central, district. It was built during the English colonial period. The clock tower was painted red so it would blend with its surroundings on Dutch Square.
Image by beggs on Flickr under Creative Commons License.
5

The Windmill Replica is located on Dutch Square and serves as a reminder that the Dutch once occupied the city. It is near to other popular attractions, and the beautiful windmill is definitely worth a visit.
Image by Capella Boltiador on Flickr under Creative Commons License.
6

The Bridge Monument is located in the historical district of Melaka behind the Windmill Replica. It depicts the history of the Tan Kim Seng Bridge, which was built during British colonial rule. It was destroyed during the Japanese occupation but was rebuilt after World War II.
Image by gurmit singh on Flickr under Creative Commons License.
7

Queen Victoria's Fountain is a prominent city landmark and is one of the few existing structures left in Melaka from the period of British colonization. This beautiful fountain was created in 1901 as a monument to commemorate the Diamond Jubilee.
Image by Capella Boltiador on Flickr under Creative Commons License.
8

The Malaysian Youth Museum is housed in the former General Post Office of Melaka. The museum is devoted to the youth of the country and displays a variety of documents, photos and other items related to the local and global activities of Malaysian youth associations.

Image by Rudolph.A.furtado on Wikimedia under Creative Commons License.
9

The church is built in Dutch Colonial architecture style and is laid out in a simple rectangle of 82 feet by 42 feet. The ceiling rises to 40 feet and is spanned by wooden beams, each carved from a single tree. The original Dutch windows were reduced and ornamented after the British takeover of Malacca and the porch and vestry were built only in the mid-19th century.


Image by Capella Boltiador on Flickr under Creative Commons License.
Sight description based on wikipedia