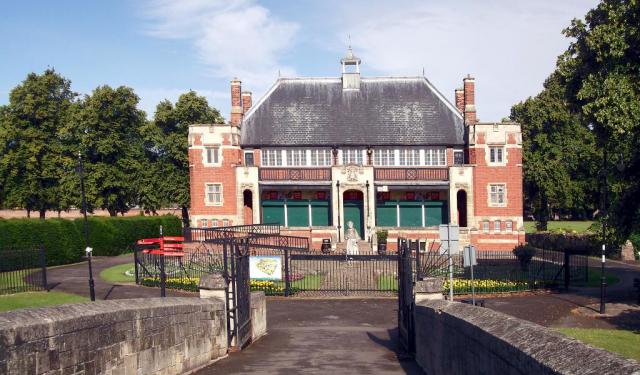 Image by NotFromUtrecht on Wikimedia under Creative Commons License.

Northern Leicester is an area packed with interesting sights. Here you will find a fabulous array of historical attractions, museums and parks. Take this tour to visit the best Northern Leicester has to offer!
How it works: Download the app "GPSmyCity: Walks in 1K+ Cities" from iTunes App Store or Google Play to your mobile phone or tablet. The app turns your mobile device into a personal tour guide and its built-in GPS navigation functions guide you from one tour stop to next. The app works offline, so no data plan is needed when traveling abroad.

Abbey Park is a public park, owned and managed by Leicester City Council through which the River Soar flows. The park contains the remains of the 12th century Leicester Abbey and the ruins of Cavendish House (built in the 17th century by William Cavendish, 1st Earl of Devonshire using stone from the abbey). The park has regularly won the Green Flag award, a national award made annually to parks which reach a high standard. It has formal gardens, a sensory garden, a boating lake and model boat lake, a miniature railway, visitor centre, cafe, children's play area with paddling pool, pets corner, tennis courts, a bowling green, and a bandstand. Abbey Park now also houses the offices and studios of Takeover Radio within one of its Gatehouse Lodges.
Image by NotFromUtrecht on Wikimedia under Creative Commons License.
Sight description based on wikipedia
2

As you stroll along the River Soar, look for Abbey Park Café. In front of Abbey Park Café is a small square with a statue of Cardinal Wolsey. The cardinal took his final refuge at the Abbey in 1530. The pavilion of the café was built in 1931, and today it’s a nice place to enjoy ice cream and refreshing drinks. Ornamental gardens surround the cafe, as well as a great deal of open, green space.
Image by Jonnic1 on Wikimedia under Creative Commons License.
3

Leicester Abbey was built under the patronage of Robert le Bossu, Earl of Leicester. It was founded as a community of Augustinian Canons. The abbey was one of the largest and most influential land owners in Leicestershire, thanks to contributions by important patrons such as the Earl of Winchester, Simon de Montfort, and, finally, the Crown. The abbey is perhaps most famous for its connection to Cardinal Thomas Wolsey, Archbishop of York and Lord Chancellor of England, who was for a time the most powerful man in England, second only to the King. He was buried within the walls of the Abbey church, and today a monument stands on his supposed resting place. In 1613, William Cavendish, the first Earl of Devonshire, acquired the property, and it became known as Cavendish House. It was used as the headquarters of Charles I after his forces occupied the town in late May 1645. The house was burnt down following the royalist defeat at Naseby and never re-built.
Image by NotFromUtrecht on Wikimedia under Creative Commons License.
Sight description based on wikipedia
4

The National Space Center is one of the United Kingdom's leading visitor attractions that is devoted to space science and astronomy. The tower is 42 meters tall. The center arose from a partnership between the University of Leicester's Space Research Center and local government agencies. It is run as an educational charity and offers science workshops for school children of all ages. The Center has on display the only known Soyuz spacecraft in Western Europe (there is one at the Smithsonian Institution as part of their Apollo-Soyuz Test Project display). The center has six main galleries of exhibits and visitor activities covering space flight, astronomy and cosmology. The attraction also includes a Digistar 3 dome cinema and planetarium, a gift shop and a restaurant. The restaurant is ominously situated beneath the two nozzles of the Blue Streak and PGM-17 Thor rockets.
Image by mattbuck4950 on Flickr under Creative Commons License.
Sight description based on wikipedia
5

The Abbey Pumping Station is a museum on Corporation Road, opposite the National Space Center. The museum was previously a pumping station used to pump sewage to treatment works at Beaumont Leys. Designed by architect Stockdale Harrison in 1890, the grand Victorian building and beautifully decorated beam engines were a cause of great civic pride. It continued pumping Leicester's sewage until 1964, when it closed for renovation. It opened as a museum in 1972. It is one of a number of historic pumping stations in England that have been preserved. The museum has a narrow gauge railway. There is also a collection of vintage vehicles, which are operated on select days.
Image by Laraloola on Flickr under Creative Commons License.
Sight description based on wikipedia
6

Belgrave Hall is a Queen Anne-style house built in 1709 in the midst of 2 acres (8,100 m2) of walled gardens. The hall opened to the public in 1936 as a museum. Today, Belgrave Hall shows the contrasting lifestyles of an upper middle class family and domestic servants in Victorian society. In 1999, Belgrave Hall became famous across the world when two ghostly figures were recorded on security cameras outside the hall. The site is still of interest to ghost hunters. The ISPR (International Society for Paranormal Research) examined the footage and decided the image was environmental in nature rather than paranormal. They also noted the apparition would have had to be over 10 ft (3.0 m) tall. The team from Ghost Hunters International concluded it was most likely people with reflective jackets walking around.
Image by Kate Jewell on Wikimedia under Creative Commons License.
Sight description based on wikipedia
7

In Leicester's northern suburb of Belgrave, you can find St. Peter’s Church. The church was built in the 13th century on the site of an 11th-century place of worship. Today this is an acting church that holds services every Sunday. The church's ancient font and old headstones in the churchyard attract tourists.
Image by RATAEDL on Flickr under Creative Commons License.
8

Watermead Country Park is a network of artificial lakes in the valley of the River Soar and the old Grand Union Canal. The parks provide bird watching, fishing and watersports facilities. The northern-most lake is named John Merricks Lake, after the silver Olympic medalist who practiced sailing on the lake. Farther south is King Lear's Lake. A statue on the western side of the lake depicts the final scene of Shakespeare's play King Lear. There are several more artificial lakes to the south. At the southern-most lake, often referred to as Mammoth Lake due to the large statue of a mammoth in the vicinity, you can see Leicester and the surrounding area for some distance in either direction. The Millennium Mammoth was built to commemorate the discovery of Ice Age mammoth remains found when Watermead was a quarry.
Image by Mat Fascione on Wikimedia under Creative Commons License.
Sight description based on wikipedia