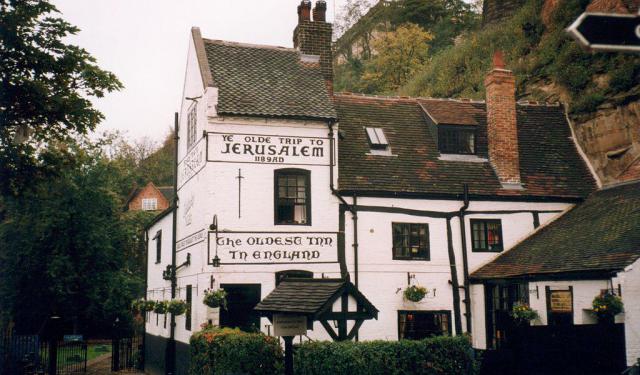 Image by Jussuf on Wikimedia under Creative Commons License.

When traveling to Nottingham, don't forget to visit the national symbol of England - the pub. Nottingham has a great variety of traditional pubs, some of which are so old, they are listed on the National Register of Historic Places. Tasting English beer and ale is a 'must do' for any visitor to Nottingham. Take this tour to explore some of the most popular public houses in the city.
How it works: Download the app "GPSmyCity: Walks in 1K+ Cities" from iTunes App Store or Google Play to your mobile phone or tablet. The app turns your mobile device into a personal tour guide and its built-in GPS navigation functions guide you from one tour stop to next. The app works offline, so no data plan is needed when traveling abroad.

Bunkers Hill Inn is a pub on Parliament Row that reportedly opened in 1799. It is a good place to have a pint of beer with friends. The drinks are well-priced, and the place is quiet, although it is located on a busy road. The beer is made locally at the Nottingham Brewery.
Image by Darkbeer54 on Flickr under Creative Commons License.
2

2) The Old Dog and Partridge

The Old Dog and Partridge is a traditional pub located in the center of Nottingham. The pub features a bar and two lounge areas. It is a popular meeting spot for the young and old alike, and is a perfect place to enjoy some beer and conversation. The pub is open Monday to Thursday from 9 a.m. to 11 p.m., Friday and Saturday from 9 a.m. to 2 a.m.. and Sunday from 11 a.m. to 11 p.m.
Image by Craig Wood on Flickr under Creative Commons License.
3

Langtry's is a small corner pub located on Parliament Street next to The Turf Tavern. This pub is popular with theater-goers attending performances at the nearby Royal Concert Hall. The atmosphere of the pub is quiet and relaxing. There is ale on tap and tasty beer available for reasonable prices. The pub décor is traditional, with wooden floors and heavy furniture.
Image by puptoes74 on Flickr under Creative Commons License.
4

The Tap 'N' Tumbler is located in the heart of the city and is known as Nottingham's best "rock" pub. The pub has a diverse menu and offers a wide selection of beer and ale. On weekends the pub invites rock bands to perform. When there isn't live music, you can watch sports on the pub's large TVs. The place is open Monday to Thursday from 12 p.m. to 12 a.m., Friday 12:00-01:00; Saturday 12:00-02:00 and Sunday 12:00-23:00.
Image by PAJager on Flickr under Creative Commons License.
5

The Bell Inn is a Grade II listed public house dating from around 1437 that lays claim to being the oldest in Nottingham. The Inn was originally constructed around 1420 as a refectory for the monks of the monastery on Beastmarket Hill, but became a secular alehouse in 1539 taking its name from the Angelus bell that hung outside. Entrance to the bars is via the central passageway, that used to lead to the stables where the Snack Bar now stands, which retains its original flagstones. To the right of the entrance are the leprosy windows where customers supposedly had their fingers counted before being allowed to enter.

The original bars known as The Long Room (a.k.a. The Tudor Bar) and The Elizabethan Bar (a.k.a. Lizzies Bar) date back to 1437 and the original timber crown-posts and cross beams have been preserved. The Snack Bar was an outdoor courtyard with two wells used for brewing that was converted to its current form by Robert Jackson in 1928 and extended by his son and grandson in 1991 to include a stage for live music performances.

Image by stevecadman on Flickr under Creative Commons License.
Sight description based on wikipedia
6

Ye Olde Trip To Jerusalem is one of the 20 public houses which claim to be the oldest drinking establishment in England. The Trip (as it is known locally) is at the foot of Castle Rock in Nottingham's City Centre. According to local legend it takes its name from the 12th Century Crusades to the Holy Land: legend has it that knights who answered the calls of Richard I to join the crusades stopped off at this watering hole for a pint on their way to Jerusalem. It is even claimed that Richard himself frequented the pub although this is probably merely legend as the king spent little time in the country.

The pub is famous for its caves, carved out of the soft sandstone rock (beneath the castle) against which the building is set. The larger "ground level" caverns are now used as the pub's rear drinking rooms. There is also a network of caves beneath the building, originally used as a brewery. The cursed galleon is a small wooden model of a ship in one bar. It's claimed that people who have cleaned it have all met a mysterious death. Landlords have refused to allow anyone to dust the ship over the years, allowing inches of thick grime to build up on it. The Trip also contains an antique chair; it is claimed that a woman who sits in the chair will increase her chances of becoming pregnant.

Image by CharNewcomb on Flickr under Creative Commons License.
Sight description based on wikipedia