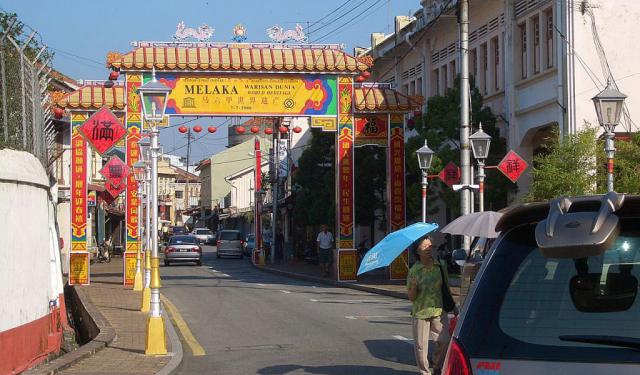 Melaka's historic district is a wonderful area where you can find two mausoleums of great Malay warriors, several outstanding temples, the Chinese Opera Theater, traditional Malay houses and excellent shops. This part of the city embraces its rich history and welcomes all visitors. Take this tour to see the most interesting attractions in Old Melaka!
How it works: Download the app "GPSmyCity: Walks in 1K+ Cities" from iTunes App Store or Google Play to your mobile phone or tablet. The app turns your mobile device into a personal tour guide and its built-in GPS navigation functions guide you from one tour stop to next. The app works offline, so no data plan is needed when traveling abroad.

Located on Jalan Kampung Kuli Street, Hang Jebat's Mausoleum houses the remains of Hang Jebat, a Malay warrior and one of the five great soldiers from the time of the Malacca Sultanate. This tomb was built in the Achinese style and dates back to approximately the 14th century.
Image by Mrpresidentfaris on Wikimedia under Creative Commons License.
2

Sri Poyyatha Vinayagar Moorthi Temple is the oldest Hindu temple in Malaysia. It is located on Jalan Tokong, or Temple Street, near the Kampung Kling Mosque. This beautiful temple was built in the 1780s by the Hindu community of Melaka and is dedicated to Vinayagar, or Ganesh, the elephant goddess.
Image by Vmenkov on Wikimedia under Creative Commons License.
3

Jonker Street is also known as Jonker Walk or Jalan Hang Jebat (in the Malay language). It is a pleasant street in Chinatown, which is home to a vast array of stores. Here you will find unique antique items, wood-carved statues, household products, clothing, accessories and souvenirs.
Image by beggs on Flickr under Creative Commons License.
4

Kampung Kling Mosque, or Masjid Kampung Kling, is an old mosque situated at Jalan Tukang Emas. The original structure built by Indian Muslim traders in 1748 was a wooden building and in 1872, it was rebuilt in brick.

The architectural design of the mosque is a cross between Sumatran, Chinese, Hindu, and the Melaka Malay. The minaret, ablution pool and entrance arch were built at the same time with the main building. The mosque also has a blend of English and Portuguese glazed tiles, Corinthian columns with symmetrical arches in the main prayer hall, a Victorian chandelier, a wooden pulpit with Hindu and Chinese-style carvings, and Moorish cast iron lamp-posts in the place of ablution for pre-prayer cleansing. The Department of Museums and Antiquities completed conservation works on the mosque in the 1990's.

Image by Tomoaki INABA on Flickr under Creative Commons License.
Sight description based on wikipedia
5

The building conforms to the principles of feng shui and covers an area of 4,600 m2. Built in 1645 by Kapitan Lee Wei King with building materials imported from China, Cheng Hoon Teng served as the main place of worship for the local Hoklo (Hokkien) community. The main hall was built by Kapitan Chan Ki Lock in 1704 and was rebuilt in 1801 by Kapitan China Chua Su Cheong, who contributed to the aesthetic structural additions of the building. In 1962, then abbot Seck Kim Seng ordained Houn Jiyu-Kennett, a Zen nun from England and the future founder of the Order of Buddhist Contemplatives, at this temple. In 2003, Cheng Hoon Teng was awarded a UNESCO award for outstanding architectural restoration.

Image by Mr Tan on Wikimedia under Creative Commons License.
Sight description based on wikipedia
6

The traditional Chinese Opera Theater is located just across the street from the prominent Cheng Hoon Teng Temple and forms a part of the Cheng Hoon Teng temple complex. The theater has a nicely constructed performance stage and was restored in the late 1990s.
Image by yeowatzup on Flickr under Creative Commons License.
7

Kampung Keteh is located just beside the Traditional Chinese Opera Theater. It is a small rural community, which consists of seven residential houses, including the residence of the celebrated Malay writer Munshi Abdullah and the mausoleum of Acheh General.
Image by Strider52 on Wikimedia under Creative Commons License.
8