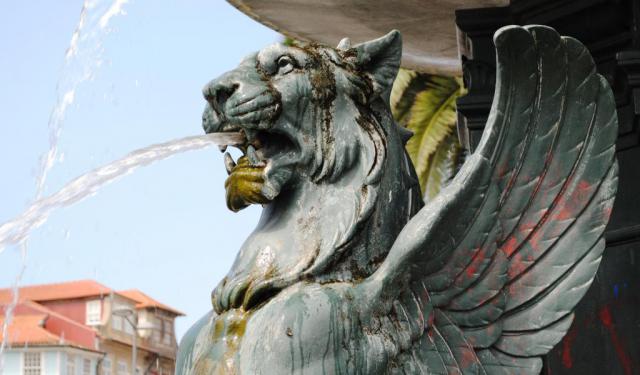 Image by HombreDHojalata on Wikimedia under Creative Commons License.

Tour of Porto's Monuments and Statues (Self Guided), Porto

Porto is home to a wide variety of landmarks, which the city has acquired over a long period of time. Today the city works hard to preserve these monuments and statues and keep them looking as they did when they were originally built.

** In Porto there are many statues and sculptures all over the city. Each one has its own story and some are very old, so go and discover them. Some are quite funny and are perfect for taking pictures with them!**PH**
How it works: Download the app "GPSmyCity: Walks in 1K+ Cities" from iTunes App Store or Google Play to your mobile phone or tablet. The app turns your mobile device into a personal tour guide and its built-in GPS navigation functions guide you from one tour stop to next. The app works offline, so no data plan is needed when traveling abroad.

The Estatua do Infante D. Henrique, or the statue of Prince Henry the Navigator, was first installed in Porto in 1894. The creation of sculptor Tomás Costa, it celebrates the life of this 14th century prince who is famous for his many maritime discoveries. The prince was the fifth son of King John I who was the founder of the Dynasty of Avis. Born in 1394, Prince Henry was a master seaman whose expeditions and military exploits are famous. He was credited with securing significant trade routes for Portugal, making the country the world's major economic power of the time. It was under the leadership of Prince Henry that Portugal sent expeditions around the Ivory Coast of Africa, which gave Portugal access to the vast riches of Africa, including gold. He was rewarded for his discoveries with many titles, including appointment as the leader of the Order of Christ. The monument is located near the Ribeira section of Porto. It has a very tall pedestal with the sculpture of the Prince who is turned toward the ocean and points authoritatively, as if giving orders to his men. The pedestal has relief sculptures encrusted thereupon, depicting scenes from the life of Prince Henry.
Image by Daniel VILLAFRUELA. on Wikimedia under Creative Commons License.
Sight description based on wikipedia
2

Vímara Peres was a ninth-century nobleman from the Kingdom of Galicia. Vímara was a vassal of the King of Asturias, Alfonso III, and was sent to reconquer and secure from the Moors (Arabs and Berbers who had invaded Visigothic Hispania), in the west coastal fringe of Gallaecia, the area from the Minho River to the Douro River, including the city of Portus Cale, later Porto and Gaia, from where the name of Portugal emerged.

He was able to expel the Moors and founded a fortified town under his own name Vimaranis (of Vimar) which later became Guimaranis, present day Guimarães (the Portuguese call it "The Cradle City"). Vímara Peres died in 873 in the territory of A Coruña.

Opened in 1968, this equestrian statue in bronze, made by the sculptor Barata Feyo, represents the mythical nobleman Vímara Peres.

Image by Fernando on Flickr under Creative Commons License.
Sight description based on wikipedia
3

The Newspaper Vendor Statue (Estátua do Ardina) is a tribute to ardina, the newspaper seller. This is a bronze statue, in natural size and authored by the sculptor Manuel Dias. The ardina has a newspaper in his hand, a bag over his shoulder and is supported by a traditional post box.

It is one of the most photographed statues in the city and is also one of the points where a large number of tourists hang out. ***PH***

The ardina is a street newspaper vendor that hawking the news calls the attention of the potential customer. Figure very portrayed by artists and very popular for his public exhibition, his origin is lost in time and refers to the "news" that circulated by word of mouth. Ardina differs from the current distributor of free newspapers.

Disregarded by the appearance of kiosks and other means of distribution, ardinas are rarely found on the streets of Lisbon , that proclaimed the headline of the day, and the source of information for their livelihood.

Image by Manuel de Sousa on Wikimedia under Creative Commons License.
Sight description based on wikipedia
4

In 1866 a monument dedicated to King Peter IV, a monarch closely linked to Porto, was inaugurated in the middle of the square. The monument, by French sculptor Anatole Calmels, consists of a statue of Peter IV riding a horse and holding the Constitution that he had fought to protect during the Liberal Wars. Pedro I of Brazil was the founder and first ruler of the Empire of Brazil and was also King of Portugal as Pedro IV.

His full name was Pedro de Alcântara Francisco António João Carlos Xavier de Paula Miguel Rafael Joaquim José Gonzaga Pascoal Cipriano Serafim. He was born on October 12, 1798, in Queluz, the fourth child of King Dom João VI of Portugal and Infanta Charlotte of Spain. The Emperor-King was a member of the Portuguese branch and founder of the Brazilian branch of the House of Braganza and was referred to using the honorific "Dom".
Image by Adam Hinett on Flickr under Creative Commons License.
Sight description based on wikipedia
5

Fountain of Youth Naked Girl (Fonte da Juventude Menina Nua) or Menina Nua of Porto represents the youth - a naked woman sitting on a plinth. It was held in 1929.

The young woman, who posed for the sculptor, was called Aurélia Magalhães Monteiro and was known as Lela, Lelinha or "Ceguinha do 9", a reference to Block 9, in the Pasteleira district , where he lived. Despite having died in 1992, at the age of 82, she is still alive in the various statues for which she posed.
***PH***
Image by Vitor Oliveira on Wikimedia under Creative Commons License.
6

Fonte dos Leões is located on Plaza de Teixeira Gomes. This fountain is one of the most beautiful in all of Porto. In 1882 Porto developed a project designed to bring water to the city. As a result, Fonte dos Leões was built, providing the population from this part of the city with better access to water.
Image by Marcio on Wikimedia under Creative Commons License.
7

José Duarte Ramalho Ortigão was a Portuguese writer of the late 19th century. He spent his early years with his maternal grandmother in Porto. In 1862 he dedicated himself to journalism and became a literary critic on the Diário do Porto; he also contributed to several literary magazines.

At this period romanticism was the dominant trend in Portuguese literature, led by several major writers, including Camilo Castelo Branco and Soares de Passos, who influenced Ortigão. Ortigão also worked as a translator. In 1874 he produced a Portuguese translation of the English satirical novel Ginx's Baby by Edward Jenkins.
Image by Manuel de Sousa on Wikimedia under Creative Commons License.
Sight description based on wikipedia
8

António Ferreira Gomes Statue (Estátua António Ferreira Gomes) stands in front of the garden Jardim da Cordoaria, also known as Campo dos Martires da Patria. The monument itself was created to commemorate Antonio Ferreira Gomes, who was a prominent Portuguese Catholic bishop in Porto from 1952 until 1982.
Image by Vitor Oliveira on Wikimedia under Creative Commons License.
9

9) "Thirteen Laughing at Each Other" Statue

These charming sculptures are in the Jardim da Cordoaria, the Garden of the Ropery, on Campo dos Mártires da Pátria. This is one of the prettiest parks in Porto, close to the twinned Carmelite churches, to the Clerigos tower and church and to the Livraria Lello bookshop.

"Thirteen Laughing at Each Other" (Treze a Rir uns dos Outros) consists of four sets of benches where various smiling groups are distributed around the garden. Thus, this set of statues is composed of 13 figures.

Thus, each figure describes its own movement, but always with a common factor: the expression of a hilarious laugh.

So, when you go for a walk in the Jardim da Cordoaria, sit next to these statues and take a funny photo.
***PH***
Image by Neva Micheva on Wikimedia under Creative Commons License.

Tour Duration: 2 Hour(s)
Travel Distance: 3.0 Km or 1.9 Miles
Where To Stay in Porto, Portugal - Guide of Best Areas and Hotels