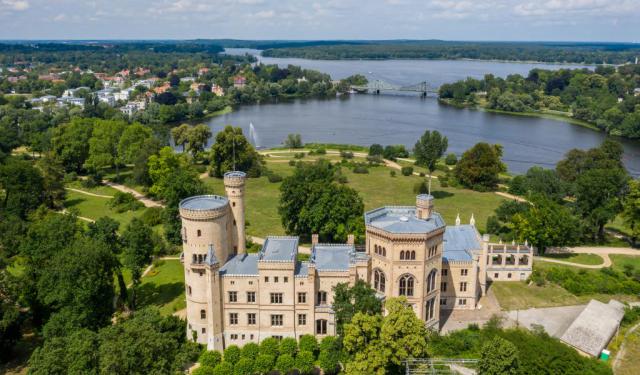 Image by Times on Wikimedia under Creative Commons License.

Babelsberg Park is located in the Babelsberg district of Potsdam. This amazing park offers an exquisite ‘collection’ of Gothic buildings. The famous Babelsberg Palace and the surprisingly beautiful Engine Pump House can be found here. Take this tour to discover the most notable landmarks in Babelsberg Park.
How it works: Download the app "GPSmyCity: Walks in 1K+ Cities" from iTunes App Store or Google Play to your mobile phone or tablet. The app turns your mobile device into a personal tour guide and its built-in GPS navigation functions guide you from one tour stop to next. The app works offline, so no data plan is needed when traveling abroad.

Flatowturm Tower was built in the Neo-Gothic architectural style in 1856. Flatowturn is 46 meters tall and was inspired by Eschenheimer Torturm, which is located in Frankfurt am Main. Unfortunately, after the bombing of Potsdam in 1945, most of the furniture and decorative elements were stolen or destroyed.
Image by JensMarder on Wikimedia under Creative Commons License.
2

Matrosenhaus is situated between the Havel River and Flatowturm Tower. The building was designed by famous architect Johann Heinrich Strack and was finished in 1842. It a great example of the Gothic architectural style and will definitely impress you.
Image by Daniel Naber on Wikimedia under Creative Commons License.
3

Gerichtslaube is a 13th-century pergola that was initially built in Berlin and was a part of the Old Town Hall. When the New Town Hall was built, it was decided to disassemble the pergola and transfer it to Babelsberg Park. The architect responsible for the transfer was Heinrich Strack. This two-story red brick building is a unique construction that seamlessly combines the new with the old.
Image by Axel Mauruszat on Wikimedia under Creative Commons License.
4

Kleines Schloss, also known as Little Babelsberg Palace, is located in the most picturesque part of the park on the banks of the Havel River. It began as a simple structure and was later transformed into a palace. It was rebuilt in two stages, first in 1834 and then in 1842, by architect Ludwig Persius. The English Tudor-Gothic style of the building was requested by Princess Augusta. This beautiful white palace still retains it grandeur.
Image by SteffenKahl on Wikimedia under Creative Commons License.
5

Babelsberg Palace (German: Schloss Babelsberg) lies in the eponymous park and quarter of Potsdam. For over 50 years it was the summer residence of Prince William, later Emperor William I and his wife, Augusta of the House of Saxe-Weimar. On 22 September 1862 in the palace and adjoining park the discussion between King William I and Bismarck took place that ended with the nomination of Bismarck as Minister President and Foreign Minister of Prussia.

The building, designed in the English Gothic style, was built in two phases over the period 1835–1849. The contract to plan the palace was given to the architects Karl Friedrich Schinkel, Ludwig Persius and Johann Heinrich Strack. Babelsberg Palace is managed by the Berlin-Brandenburg Foundation for Prussian Palaces and Gardens and is protected by UNESCO as a world heritage site within the Potsdam ensemble. The architecture of Babelsberg Palace formed the template for the construction of Kittendorf Palace between 1848 and 1853 in the Mecklenburg district of Demmin by Schinkel's pupil, Friedrich Hitzig.

Image by Gunnar Ries on Wikimedia under Creative Commons License.
Sight description based on wikipedia
6

Dampfmaschinenhaus is a beautiful Engine Pump House built by famous architect Friedrich Ludwig Persius after he built Babelsberg Palace. In 1843 the first stone was laid, and by 1845 construction was complete. It was designed as a medieval castle with the towers meant to disguise all the technical attributes of an engine pump house.
Image by Suse on Wikimedia under Creative Commons License.
7

7) Faculty of Law of The University of Potsdam

Babelsberg Park houses the Faculty of Law of The University of Potsdam. It is located in the historic buildings situated behind the famous Babelsberg Palace near Dampfmaschinenhaus. These are relatively new structures, as they were built in 1950. They are surrounded by buildings that date back to the 19th century.
Image by Hedavid on Wikimedia under Creative Commons License.
8

Astrophysical Institute Potsdam (AIP) is a German research institute. It is the successor of the Berlin Observatory, founded in 1700, and of the Astrophysical Observatory Potsdam (AOP), founded in 1874. The latter was the world's first observatory to explicitly emphasize the research area of astrophysics. The AIP was founded in 1992, as part of a re-structuring following German reunification. The key topics of the AIP are cosmic magnetic fields (magnetohydrodynamics) on various scales and extragalactic astrophysics. Astronomical and astrophysical fields studied at the AIP range from solar and stellar physics to stellar and galactic evolution to cosmology. The institute also develops research technology in the fields of spectroscopy and robotic telescopes. The institute is a partner of the Large Binocular Telescope in Arizona; it has erected robotic telescopes in Tenerife and the Antarctic, and it develops astronomical instrumentation for large telescopes such as the VLT of the ESO.
Image by Oth on Wikimedia under Creative Commons License.
Sight description based on wikipedia
9

At the end of the 19th century the Berlin Observatory, originally built outside the border of the town, was enclosed by blocks of flats, so scientific observations were almost impossible. Therefore, Foerster proposed the removal of the observatory to a place outside Berlin with better observational conditions. In 1904 he appointed Karl Hermann Struve, former director of the observatory of Königsberg, as his successor to realize this project. After test observations by Paul Guthnick in the summer of 1906, a new site was found on a hill in the eastern part of the Royal Park of Babelsberg. In June 1911 the construction of a new observatory began in Babelsberg and on August 2, 1913, the removal from Berlin to Babelsberg was complete. When the 122 cm telescope (at this time the second largest in the world) was finished, Babelsberg Observatory was the best-equipped observatory in Europe.
Image by Dr.michi on Wikimedia under Creative Commons License.
Sight description based on wikipedia