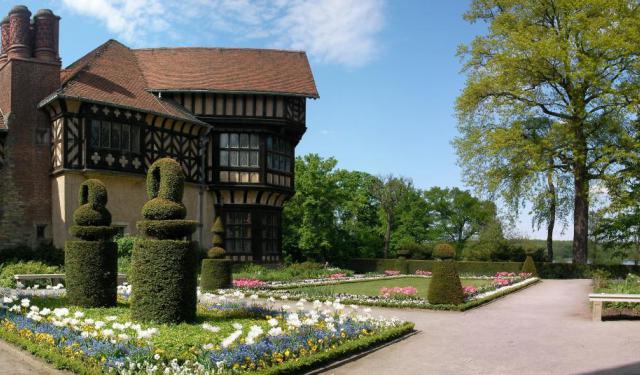 Image by Olaf Oehlsen on Wikimedia under Creative Commons License.

Neuer Garten (New Garden) was founded at the behest of Friedrich William II in 1787. It was "new" compared to the already established Sanssouci Park. This beautiful garden lies on more than 100 hectares of land and houses wonderful historic buildings. Take this tour to discover the famous architecture found in Potsdam's Neuer Garten.
How it works: Download the app "GPSmyCity: Walks in 1K+ Cities" from iTunes App Store or Google Play to your mobile phone or tablet. The app turns your mobile device into a personal tour guide and its built-in GPS navigation functions guide you from one tour stop to next. The app works offline, so no data plan is needed when traveling abroad.

Meierei is an old dairy farm that was originally built between 1790 and 1792 by the architect Andreas Ludwig Krüger. The farm was enlarged for the first time in 1844, when a second floor and a "Norman" style roof were added. The second enlargement occurred in 1862 with the addition of a water pump. In 1918 the building was transformed into a restaurant, which was one of the most popular in Potsdam until 1941. Today the building has been restored and is used as a brewery.
Image by Biberbaer on Wikimedia under Creative Commons License.
2

Muschelgrotte was designed and built by Andreas Ludwig Krüger between 1791 and 1792. It was intended as a place to escape during warm summer days and to be as close as possible with nature. It was built near the lake and offered breathtaking views. The remains of the original three rooms stand today.
Image by Giorgio Michele on Wikimedia under Creative Commons License.
3

Schloss Cecilienhof is a palace in the northern part of the Neuer Garten park in Potsdam, close to the Jungfernsee lake. It has been part of the Palaces and Parks of Potsdam and Berlin UNESCO World Heritage Site since 1990.

Cecilienhof was the last palace built by the Hohenzollern family. Emperor Wilhelm II of Germany had it erected for his son, Crown Prince Wilhelm of Germany, and the crown prince's wife Duchess Cecilie of Mecklenburg-Schwerin. The house was designed by Paul Schultze-Naumburg to look like an English Tudor country house and built between 1914 and 1917. Its design was based on a house called 'Bidston Court' (later 'Hillbark') on the Wirral Peninsula, which in turn was inspired by Little Moreton Hall. The interior was furnished according to plans by Paul Troost, who originally had designed steamship décors.

Cecilienhof was the location of the Potsdam Conference between 17 July and 2 August 1945. The rooms had been largely refurnished to match the taste of the participants. Winston Churchill, later Clement Attlee, Joseph Stalin and Harry S. Truman met at the round table in the great hall. On 26 July 1945 Churchill and Truman issued the Potsdam Declaration defining the terms for Japanese surrender, while Truman had already given order to prepare the atomic bombing of Hiroshima and Nagasaki.

Today Cecilienhof is a museum as well as a hotel. Queen Elizabeth II visited Cecilienhof on 3 November 2004. On 30 May 2007, the palace was used for the G8 foreign ministers summit.

Image by Stephan Grund on Wikimedia under Creative Commons License.
Sight description based on wikipedia
4

The Green House is located not far from Cecilienhof Palace. It was built in 1791 on the lake shore, which offered a great view for the guests of the house. The name of the house came from its color; there is also a white house and a brown house in the garden.
Image by Eva Kröcher on Wikimedia under Creative Commons License.
5

One of the many interesting constructions in the New Garden, the Pyramid served not only as an architectural monument but as an ice cellar. Built in 1792, the cellar kept food fresh and was essentially an early-model refrigerator. During the winter, ice from the frozen lake was taken and stored on the floor of the cellar to keep things cool year-round.
Image by unify on Wikimedia under Creative Commons License.
6

The Marmorpalais (marble palace) was a royal residence in Potsdam, built on the grounds of the extensive Neuer Garten on the shores of Lake Heiliger See. The palace was commissioned by Frederick William II of Prussia and designed in the early classicist style by the architects Carl von Gontard and (from 1789) Carl Gotthard Langhans, designer of Berlin's Brandenburg Gate.

The Marmorpalais was reserved for the private use of the king, who had an artistic temperament. With this new construction the nephew and successor of Frederick the Great dissociated himself from his childless uncle, whom he disliked and who favored earlier Baroque and Rococo forms.

The red brick Marmorpalais was originally a two-story square building. A fine view of the surrounding gardens and lakes is possible from a round pavilion on the flat roof of the cubical structure. Among other buildings, the little castle on the Pfaueninsel in the Havel River was constructed as an eye-catcher. A stairway and gallery accessed from the roof lead into the belvedere. Sculptured putti carrying a basket of fruit decorate the tip of the pavilion. The palace got its name from the grey and white Silesian marble used for the decorative elements and partitioning structures.

On the nearby lake shore is to be found the palace kitchen, which was built 1788-1790 by Langhans in the romantic style of a half-sunken classical temple ruin. An underground corridor provides a connection with an artificial grotto on the ground floor of the palace which served as a dining room in summertime.
Image by Olaf Oehlsen on Wikimedia under Creative Commons License.
Sight description based on wikipedia
7

Schlosskueche is a palace kitchen built in the shape of a temple ruin. This outrageous architectural structure was built by the Langhans between 1788 and 1790. From the outside, it looked like an old ruined temple, but inside, the working kitchen connected with the Marble Palace through an underground tunnel that led to the summer dining room.
Image by Olebole on Wikimedia under Creative Commons License.
8

The Orangery is located near the “Dutch Establishments” and was built between the years 1791 and 1793. The designers of this structure took inspiration from Egyptian mythology. The entrance to the building resembles an Egyptian portal, and above the door lies a Sphinx. Sculptures of Egyptian gods surround another entrance to the Orangery. All of the sculptures were created by Johann Gottfried Schadow.
Image by oxbox on Wikimedia under Creative Commons License.
9

Gotische Bibliothek is a Gothic-style library located on the lake shore. This two-story pavilion was created by the same architects who were in charge of designing all New Garden buildings - Carl Gotthard Langhans and Andreas Ludwig Krüge. One floor of the library was dedicated entirely to French literature and another to German.
Image by karstenknuth on Wikimedia under Creative Commons License.