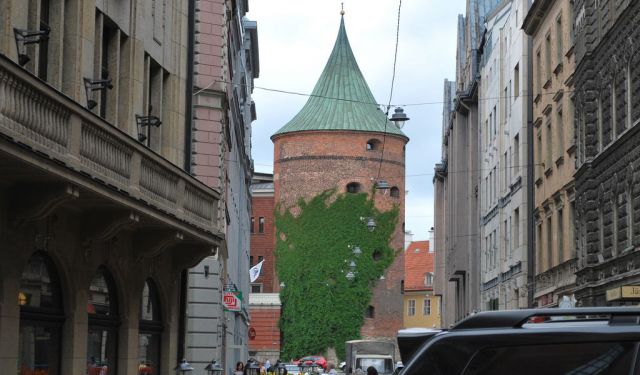 Image by Adam Harvey on Flickr under Creative Commons License.

Over the years, Riga has many times served as a battleground as evidenced by the many monuments, gates and towers in the city that honor those who suffered or died in conflicts. In addition to war memorials, the city also has numerous landmarks related to Latvia's independence. Take this self-guided tour to discover some of Riga's most notable landmarks.
How it works: Download the app "GPSmyCity: Walks in 1K+ Cities" from iTunes App Store or Google Play to your mobile phone or tablet. The app turns your mobile device into a personal tour guide and its built-in GPS navigation functions guide you from one tour stop to next. The app works offline, so no data plan is needed when traveling abroad.

Brivibas Piemineklis - the Freedom Monument - commemorates the soldiers who fell during the Latvian War of Independence of 1918-1920. Built in 1935 to a design by R. Mirsmeden, the monument asserts Latvia's national values. It stands as the symbol of two battles fought by the country for its independence and is a ground zero for the majority of political demonstrations held in Riga nowadays. Surprisingly enough, the monument has survived almost 50 years of the Soviet rule, in part due to its high artistic value and also because of the alternate interpretation of its symbols, which agreed with the Soviet doctrine. Still, many of those who did dare to lay flowers at the monument in those days in commemoration of its original cause, i.e. Latvian strive for independence, had problems with the authorities and were likely to be prosecuted.

The structure consists of three major blocks decorated by 14 statuary groups. The base block features Latvian riflemen and singers; the one above depicts scholars, people of work, Guardians of the Fatherland and the Family. Other groups include “The Battle against the Bermontians on the Iron Bridge” and “1905”, “Lāčplēsis” (bear slayer, the folk hero), “Vaidelotis” (pagan Baltic priest), “Chain Breakers” and “Latvia”. The central element of the monument, topping a 19 metre (62 ft) column, is the bronze statue of a woman holding up three golden stars above her head, symbolising three Latvian regions: Kurzeme, Vidzeme and Latgale.

With a total height of 42 metres, the Freedom Monument is visible from almost every corner of Old Riga, and acts as a sort of navigation aid for tourists en route to different locations.

Image by Iikka Kivi on Wikimedia under Creative Commons License.
2

Bastejkalns or The Bastion Hill is a former sand rampart which has been redesigned into a place for outdoor recreation. Works on this 16 metre hill started as far back as 1859, when the first trees and flowers were planted. In 1883, to ease public access, a pedestrian wooden bridge was built across the former defensive moat, converted into a winding canal. In 1888, the entire hill was redone by landscape architect Georg Kuphaldt, who moved some of the plants to a new place and added walking paths, heading up to the top of the hill, and waterfalls. Four years later, in 1892, the wooden bridge was replaced with a stone one, designed by A. Agte. In 1893, a couple of swans were released into the park, presented to the City Garden Committee by the Society of Bird Breeders. To accommodate the swans, Henrich Shell built a special house which remarkably blended with the landscape.

Nowadays, the Bastion Hill is an established outdoor leisure spot within the city, particularly popular with locals and tourists during the warmer months. Lush greenery and water fowl residing by the canal, combined with the cultural and recreational activities organized from time to time, make the Bastion Hill one of the most popular parks in Riga. In winter, the place is just as attractive, especially the view of the city which opens from the top of the hill.

Built in the 14th century, the Powder Tower was first known as the Sand Tower and formed part of the town's fortification system, called the Sand Gate. The system comprised in total 25 towers which stood along the Sand Road, leading into the town. Its walls were made of red brick and measured up to three metres in thickness, which was enough to withstand any military assault in those days. In the 17th century the tower was transformed into a gunpowder depot and, subsequently, changed its name to Pulvertornis (Powder Tower).

In 1625, it successfully fended off the attack of the Swedish army, but the walls suffered severe damage and required serious restoration. It started only 25 years later. Another war – with Russia – left nine cannon balls embedded in the walls of Pulvertornis, calling for a new overhaul.

Between 1935 and 1940 the tower was fully refurbished and enlarged to accommodate the Museum of War.
Image by Dan on Flickr under Creative Commons License.
4

The Swedish Gate and the Old City Wall are what's left of the once mighty fortification system that surrounded Riga in the Middle Ages. Much of the complex, built between the 13th and 16th centuries, was destroyed by time or invaders or torn down in the 19th century. The Swedish Gate is the only city gate still in place, and was built in 1698 by the Swedes, who ruled the city at that time. It stands on the site of the Jürgen tower, a semicircular defensive structure, whose lower part was later built into the nearby house no.11. The apartment above the gate is said to have been, at some point, occupied by an executioner who used to put a red rose in the window each time a convict was beheaded. In 1926, the property was leased from the Society of Architects of Latvia, and rebuilt.

Today, the gate and the walls no longer serve their original fortifying purpose, but merely separate the Old Town from the busy nearby area, packed with bars and other distractions.
Image by DavidConFran on Wikimedia under Creative Commons License.
5

The Palace Garden and Park is located near Riga Castle on the banks of the Daugava River. This small park is notable for its two important landmarks. The first landmark, located in the southern section of the park, is the former site of the Victory Column. It was built by the Russians to celebrate their victory in the War of 1812 against Napoleon. Today little remains of the column. The second landmark is situated at the northern end of the park and is dedicated to the Latvian children deported to Siberia.
Image by Kotka Molokovich on Flickr under Creative Commons License.
6

The Latvian Riflemen Monument is a landmark that stands in the center of historic Riga. It is a controversial landmark, because some Latvians consider it a Communist statue. Others, however, believe it is a homage to the locals who fought in World War I. Despite the disputes, the statue will impress you with its grandeur.
Image by Fearless Fred on Flickr under Creative Commons License.
7

This fortification wall is only a small fragment of Riga's original defensive wall. It is situated near the bank of the Daugava River and is one of the few authentic remains of Riga's medieval fortification that was built in 13th and 14th centuries. The Marstalu Tower, which was a corner tower, once stood here. The tower was built in the 17th century but was destroyed a couple of years later.
Image by Unhindered by Talent on Flickr under Creative Commons License.
8

The 1905 Revolution Monument is situated on the bank of the Daugava River. It is one of the few Communist landmarks that remains standing in Riga.
Image by Wayne Hopkins on Flickr under Creative Commons License.

Riga, as the cultural capital of Latvia, has a lot to offer art lovers. Artists who display their work in one of Riga's many galleries will surprise you with their beautiful pieces. Take this self-guided tour to discover Riga's best galleries and to enjoy talented local artists.

Riga offers plenty of attractions to capture the interest of your children. Visit parks with interesting statues and fountains, check out the city's fun museums and attend the Riga Circus. Enjoy the best attractions for children in Riga on this self-guided tour.