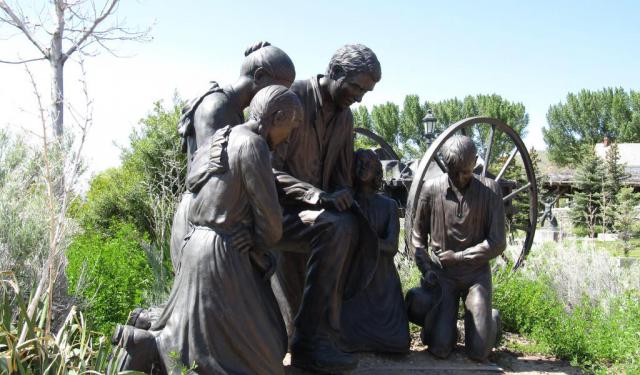 Salt Lake City has a bounty of artistic and cultural landmarks and the city continues to add more every year. This tour will help you enjoy the modern architectural sights in downtown Salt Lake City, including some of the city's first skyscrapers.
How it works: Download the app "GPSmyCity: Walks in 1K+ Cities" from iTunes App Store or Google Play to your mobile phone or tablet. The app turns your mobile device into a personal tour guide and its built-in GPS navigation functions guide you from one tour stop to next. The app works offline, so no data plan is needed when traveling abroad.

The Gallivan Center is an urban plaza in the heart of downtown Salt Lake City. It opened in 1993. Also known as the John W. Gallivan Utah Center, it is named in honor of John W. Gallivan. Located between State and Main and 200 South and Broadway, it serves as Salt Lake City's outdoor living room. It is furnished with an array of unique art projects, an amphitheater/stage, ice rink, large chess board, light wells and an aviary. Crowds gather for weekday lunches and lunchtime concerts. Countless other events fill the Gallivan Center with people. Especially popular are summertime twilight concerts. It was popular gathering place during the 2002 Olympic Winter Games. Kazuo Matsubayashi's Asteroid Landed Softly Sundial is one of the prominent features of the plaza.
Image by empracht on Flickr under Creative Commons License.
Sight description based on wikipedia
2

One Utah Center is one of the highest skyscrapers downtown. It was built by the Boyer Company in 1991 and houses mainly commercial offices. It was designed by architect Niels E. Valentiner in the postmodern style. The facade material is granite, and more than 4,150 tons of steel were used in the building's construction. The skyscraper stands 106.68 m tall and has 24 floors.
Image by Skyguy414 on Wikimedia under Creative Commons License.
3

Walker Center (formerly Walker Bank Building) opened on December 9, 1912 and took a little over a year to build. At the time of its completion, it stood as the tallest building between Chicago and San Francisco (16 stories, 67 m). It was originally constructed as the headquarters for Walker Bank, founded by the Walker brothers: Samuel, Joseph, David, and Matthew. The basement originally contained the vault for the bank, as well as a barbershop, florist, cigar store, and other shops. The main floor contained the bank, and upper floors were used as office space. It was designed by the St. Louis, Missouri-based architecture firm Eames and Young. The Walker Center is topped by a 64-foot weather tower, which gives a weather forecast based on the color of the lights. The weather tower was taken down in the 1980s due to a city ordinance but was replaced in 2008.
Image by tmac97slc on Flickr under Creative Commons License.
Sight description based on wikipedia
4

222 South Main is one of the first LEED (Leadership in Energy and Environmental Design) certified high-rises in Utah. It is the newest skyscraper in town, finished in 2009. The construction of the building was completed by Hamilton Partners, and it was designed by Skidmore, Owings & Merrill LLP. It is a modern building that supports energy conservation and has an automated HVAC system. The facade is constructed from glass and aluminum. The structure stands 22 stories high and houses mainly office space.
Image by Derrick Cox on Flickr under Creative Commons License.
5

The Wells Fargo Center is a skyscraper that was built in 1998 and is the tallest skyscraper in Utah, standing 24 stories above street level. It reaches 442 feet at its highest point (not including the antenna). The American Stores Tower was originally built as the corporate headquarters for American Stores. Shortly after completion, the company was acquired by Albertsons on August 3, 1998, and the building became known as the Delta Tower shortly thereafter. When Albertsons decided to move operations to the Hardware Building on 400 West near North Temple, the building was purchased by Wells Fargo Bank and renamed the Wells Fargo Center.
Image by David Jolley on Wikimedia under Creative Commons License.
Sight description based on wikipedia
6

The construction of the Boston and Newhouse Buildings was financed by Samuel Newhouse. Construction on the buildings took place between 1907 and 1915. He named one structure the Boston Building because of his extensive business interests in that city, while the Newhouse Building he named after himself. The Boston and Newhouse Buildings were the first “skyscrapers” in Utahand were designed by the famous New York architect Henry Ives Cobb in the beaux-arts architectural style. The buildings serve mainly as commercial office space.
Image by Georgio2 on Wikimedia under Creative Commons License.
7

The Frank E. Moss United States Courthouse (originally known as the United States Post Office and Courthouse) is a courthouse of the United States District Court for the District of Utah, located in Salt Lake City's Exchange Place Historic District. The courthouse is the oldest building among the eight buildings that make up that district. The buildings reflect Utah's growing prosperity at the end of the nineteenth century. Located on Main Street in Salt Lake City's Exchange Place Historic District, the courthouse helped introduce the Classical Revival style to Utah. The building rises five full stories above a basement and has a central two-story penthouse. In 1990 the courthouse was renamed in honor of Frank Edward Moss, a Utah native who served as a United States senator from 1959 to 1977.
Image by bobindrums on Flickr under Creative Commons License.
Sight description based on wikipedia
8

The recently built Scott M. Matheson Courthouse is located in front of the Salt Lake City and County Building. It has a contrasting glass and steel facade. The building serves as a courthouse and houses the Utah State Law Library. The symmetric two-winged structure has a central circular colonnade, which runs through all six stories.
Image by Conrad Jensen on Flickr under Creative Commons License.
9

The Salt Lake City and County Building, usually called the "City-County Building", is the seat of city government. The historic landmark formerly housed offices for the Salt Lake County government as well, hence the name. The building was originally constructed by free masons between 1891 and 1894 to house offices for the city and county of Salt Lake and to replace the Salt Lake City Council Hall and Salt Lake County Courthouse, both erected in the 1860s. During the late 1800s and early 1900s the City and County Building was the symbol of non-Mormon citizens' open defiance of The Church of Jesus Christ of Latter-day Saints. It was designed to rival the Salt Lake Temple as the city's architectural centerpiece. The architectural firm of Monheim, Bird, and Proudfoot designed the Richardsonian Romanesque building. The building's surface is elaborately carved from gray Utah Kyune sandstone.
Image by Daderot on Wikimedia under Creative Commons License.
Sight description based on wikipedia