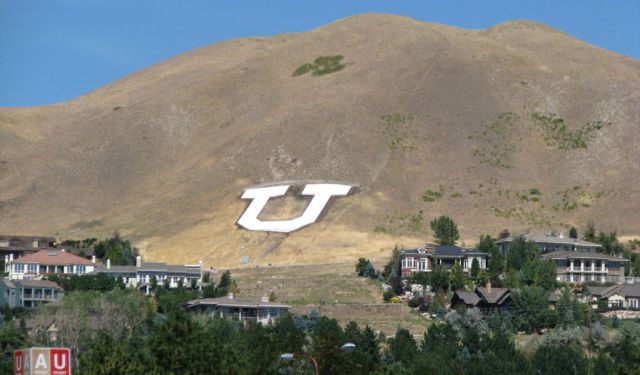 Image by FancyPants on Wikimedia under Creative Commons License.

The neighborhood home to the University of Utah, located just east of downtown, has a mixture of old and new homes and apartments. Many cultural institutions offer activities for people all ages. The area is fun to visit for its diverse architecture, historic buildings and natural beauty. Take this tour to see the best of Salt Lake's University Area.
How it works: Download the app "GPSmyCity: Walks in 1K+ Cities" from iTunes App Store or Google Play to your mobile phone or tablet. The app turns your mobile device into a personal tour guide and its built-in GPS navigation functions guide you from one tour stop to next. The app works offline, so no data plan is needed when traveling abroad.

The Pioneer Theatre Company (PTC) is one of four fully professional theater companies in Utah. The company was formed in 1962 and performances are held at the Pioneer Memorial Theatre on the University of Utah campus. The company creates its own productions on site, including costumes and scenery, while sometimes using actors and directors from out-of-state. Lees Main Stage is a 932-seat proscenium theater. Loge Art Gallery, located on the second floor of the building, is open to the public. Art is selected from local painters, photographers, and sculptors to accompany specific plays.
Image by Klubbit on Wikimedia under Creative Commons License.
Sight description based on wikipedia
3

Rice–Eccles Stadium is an outdoor football stadium on the campus of the University of Utah. It served as the main stadium for the 2002 Winter Olympics; the Opening and Closing Ceremonies were held at the stadium, which was temporarily renamed "Rice–Eccles Olympic Stadium." When Salt Lake City was awarded the 2002 Winter Olympics in 1995, it was obvious that Rice Stadium was not suitable to serve as the main stadium for the games. The concrete, timber and earth-fill facility had been built in 1927 and was showing its age. However, in 1997, Spencer Eccles, a University of Utah alumnus and chairman of Utah's biggest bank, First Security Corporation, announced that the George S. and Dolores Dore Eccles Foundation would donate $10 million toward the reconstruction of the stadium. In recognition of this gift, the University of Utah won permission from the Eccles family to add George Eccles' name to the stadium alongside that of Robert L. Rice, who had funded the original stadium in 1972.
Image by Ellie Gonzalez on Flickr under Creative Commons License.
Sight description based on wikipedia
4

Salt Lake 2002 Olympic Cauldron Park is a plaza located at the south end of Rice-Eccles Stadium on the campus of the University of Utah. Rice-Eccles Stadium was the site of the Opening and Closing ceremonies of the 2002 Olympic Winter Games. The park contains the cauldron that was lit for the duration of the games. Its interior contains a cascading waterfall. The cauldron was moved from the top of the south edge of the stadium to the plaza just south of the stadium. It is still operational and is lit on special occasions, including the opening weekend of the 2006 Winter Olympics in Italy. The cauldron is surrounded by a reflecting pool and cascades. The striking Hoberman Arch was moved from its original location at Olympic Medals Plaza to Olympic Cauldron Park. The arch is lit with various colors at night. The visitor center consists of an art gallery, theater and video viewing area.
Image by Scott Catron on Wikimedia under Creative Commons License.
Sight description based on wikipedia
5

Jon M. Huntsman Center is a 15,000-seat, multi-purpose arena on the campus of the University of Utah. The arena opened in 1969 and is named after chemicals entrepreneur and philanthropist Jon M. Huntsman, father of Utah's former governor Jon Huntsman, Jr. From its opening until the completion of the Delta Center (now known as the Energy Solutions Arena) in 1991, it was Salt Lake City's premier sports and entertainment venue. Architecturally, it is known for its steel cloud, which hangs from the arena's silver dome interior. The steel cloud holds the arena's center court scoreboard, sound and lighting systems. The arena hosted the 1979 Final Four, featuring the first round of the rivalry between all-time greats Magic Johnson and Larry Bird. Magic's Michigan State team defeated Bird's then-unbeaten Indiana State in the final, which remains the most-watched college basketball game in history.
Image by Nisa' Haron on Flickr under Creative Commons License.
Sight description based on wikipedia
7

Camp Douglas was established in October 1862 as a small military garrison about three miles east of Salt Lake City for the purpose of protecting the overland mail route and telegraph lines along the Central Overland Route. In 1878, the post was renamed Fort Douglas. The fort was officially closed in 1991 and most of the buildings turned over to the University of Utah. A small section of the original fort is used by the Army Reserve and includes the Fort Douglas Military Museum. The Military Museum at Fort Douglas is housed in a building named after General Kauffman, who founded the museum and built it into one of the United States' premier military museums, featuring exhibits from all branches of the Armed Services. A cemetery was established in 1862 about a mile south of the original parade grounds. Later, the cemetery was expanded to accommodate a larger number of burials, not only from Fort Douglas but also from Fort Cameron, following its closure.
Image by dmathew1 on Flickr under Creative Commons License.
Sight description based on wikipedia
8

Red Butte Garden and Arboretum is a botanical garden and arboretum operated by the University of Utah, located in the foothills of the Wasatch Range in Salt Lake City. It is open year-round to the public. Red Butte Garden contains 18 acres of botanical gardens and several miles of hiking trails through native vegetation. The garden began in 1930, when Dr. Walter P. Cottam, co-founder of The Nature Conservancy and chairman of the Botany Department at the University of Utah, began using campus land for plant research. In 1961, the Utah legislature designated the University's campus landscape as the State Arboretum. In 1983, the University dedicated 100 acres at the mouth of Red Butte Canyon for a regional botanical garden. Red Butte Garden hosts a series of popular summer music concerts, as well as floral, sculpture, and other art exhibits. The garden also offers many nature-related classes and events.
Image by Cory Maylett on Wikimedia under Creative Commons License.
Sight description based on wikipedia
9

The Utah Museum of Natural History is located on the campus of the University of Utah. The museum features exhibits of natural history subjects, particularly as they relate to Utah. The mission of the museum is to illuminate the natural world and human's place within it. The museum was established on the University of Utah campus in 1963 by the Utah State Legislature. It opened in 1969 in the former George Thomas Library and has specimens from the Deseret Museum, as well as from the Charles Nettleton Strevell Museum that was located in the old Lafayette School on South Temple Street from 1939 until 1947. The museum's collections emphasize the natural history of Utah and are accessible to researchers from around the world. The majority of the collections are from public lands within the inter-mountain region of the United States.
Image by Tricia Simpson on Wikimedia under Creative Commons License.
Sight description based on wikipedia
10

10) This Is the Place Heritage Park (must see)

This Is the Place Heritage Park is located on the east side of Salt Lake City at the foot of the Wasatch Range and near the mouth of Emigration Canyon. Here on July 24, 1847, Brigham Young first saw the Salt Lake Valley that would soon become the Mormon pioneers' new home. In 1917 B. H. Roberts and a Boy Scout troop built a wooden marker identifying the spot where Brigham Young's party first entered the valley. In 1921 this was replaced by a white stone obelisk that still stands east of the 1917 monument. Development of the monument began in 1937 when sculptor Mahonri M. Young, a grandson of Brigham Young, was commissioned by the State of Utah to design and create a new, larger monument. In 1957, a group of private citizens bought much of the land now contained in the park and donated it to the State of Utah to preserve it from commercial development.
Image by Cory Maylett on Wikimedia under Creative Commons License.
Sight description based on wikipedia
11

Utah's Hogle Zoo is the state's largest zoo, housing animals from diverse ecosystems. It is located at the mouth of Emigration Canyon. The zoo was founded by the Hogle family. Its original location was in Salt Lake City's Liberty Park. Before moving, the zoo had the first and only Asian elephant born in Utah. Sadly, he died at eleven months old. Current exhibits include deer, monkeys, three elephants and a variety of North American birds and mammals. It officially became Hogle Zoo when it opened at the Emigration Canyon site on August 1, 1931, on a piece of land donated by Mr. and Mrs. James A. Hogle. It is now owned by Salt Lake City and is supported through tax dollars and private donations raised by The Utah Zoological Association.
Image by Bobjgalindo on Wikimedia under Creative Commons License.
Sight description based on wikipedia